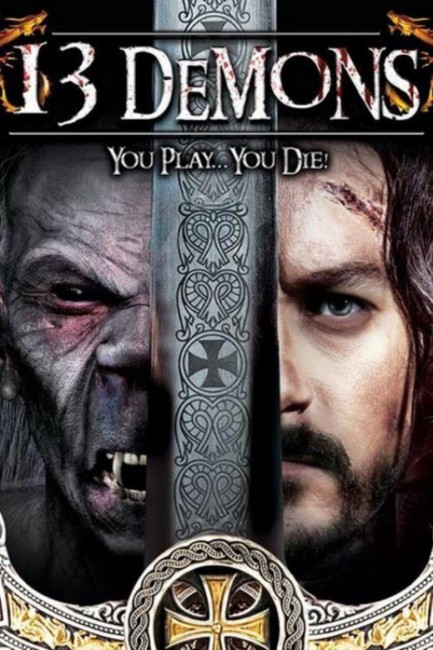 Two men are being held by police and questioned over their involvement in a series of murders. They insist they are knights on a quest to rid the Earth of demons. They were three friends that flatted together. One of the group returned home, having found a rare copy of the boardgame 13 Daemons, which had been banned in numerous countries because it is purported to have driven players into a frenzied state. As they begin playing the game obsessively, the three were drawn inside a realm where they imagined they were fighting demons.

The good (?)/bad (?) news is that not much at all has changed for Daniel E. Falicki when it comes to 13 Demons, which was made before Alien Implant. It is a slightly better made film in some senses – the cast at least give serviceable performances. (The cast incidentally also includes Falicki as one of the gamers – he’s the one with short hair. On the other hand, 13 Demons is every bit as unwatchable on all the essentials.

One of the big problems here and in Alien Implant is that Daniel E. Falicki has crap ability to write a screenplay and instead fills the running time with scenes that go on and on to no point. Once we get past the opening police interrogation scenes and the game is introduced, the film consists of some ten minutes of the three guys playing, which involves all of them sitting around a table reading out various role-playing game phrases and directions from the book – “you approach a door, you encounter a troll” etc etc.

This sort of thing occupies much of the film – no real plot progression, no compounding of the dramatics. The opening has the guys covered in blood and mentions how the game is supposed to turn people into crazed killers. This sets up a certain promise about what is going to happen but confusingly enough is something that the film never plays out.

There are occasional moments where the players enter another realm, which consists of animated patterns double exposed over the actors where they are dressed as warriors. However, quite what their fighting demons actually means is never made very clear. Crucially, the film lacks any real connection between the guys playing the game and how they ended up covered in blood, talking like mediaeval warriors and accused of murder. The nearest we get is one scene where one of the party is in a fugue state and goes and attacks a man (Jackson Ezinga) working at a garage. The film ends with no real resolution or explanation – just the detectives shouting “this is not a game” over and over at the suspects.