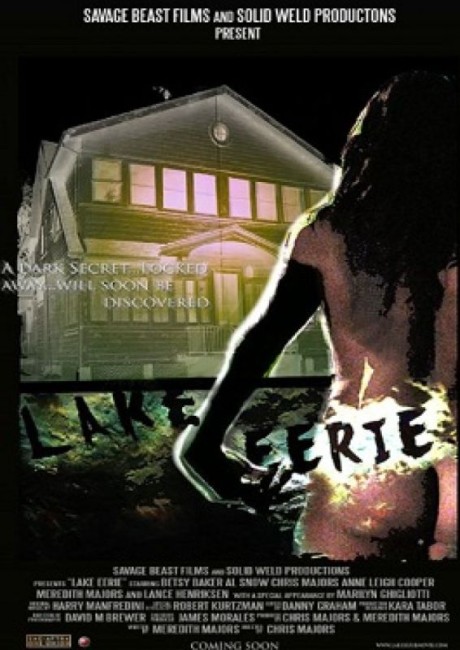 Following the death of her husband, artist Kate Ryan buys a house in La Salle, Michigan on the shores of Lake Eerie. Soon after moving in, she is troubled by dreams of both her dead husband and the house’s previous owner, archaeologist Harrison Lloyd, She befriends her neighbour Eliza whose niece Autumn is an expert on Harrison Lloyd. Finding some of Harrison’s documents, Autumn helps uncover the fact that Harrison, who went into a coma in 1969, found the fabled Locket of Light belonging to the Egyptian princess Anandi only for it to cause his soul to become trapped in the afterlife. Appearing to Kate in her dreams, Harrison tries to get her help in coming back through but warns that others are trying to stop him.

Lake Eerie seems at the outset to be yet another haunted house film. I have written elsewhere on how the haunted house genre is starting to feel creatively mined out in the last few years by an endless stream of mostly low-budget films that are starting to blur into each other with a tedium-inducing sameness. Lake Eerie seems not too different to most of these. It is slow to start. There are all the usual things going bump in the night, people thinking the heroine is going crazy because of her past mental instability and so on.

On the other hand, there is a point where Lake Eerie starts to get interestingly weird. One of these is when Meredith Majors is listening to the radio and starts praying along with the person speaking, only for the radio voice to start talking directly to her. Thereafter the film heads off in some intriguingly different directions involving Ancient Egyptian artefacts and a missing archaeologist trapped in an afterlife limbo detached from his body, along with mysterious guardians trying to stop Meredith from rescuing him. Most of the Ancient Egypt stuff is hokum but it stirs an interesting pot that certainly makes Lake Eerie seem a whole lot different from the standard haunted house film.

One of the drawbacks of the film is Meredith Majors. She is director Chris Majors’ wife and the film is a collaborative effort between the two of them with she writing and playing the lead and both of them co-producing. Despite this being a vehicle for her, Meredith comes across as a not terribly expressive lead. Things are perked up considerably with the introduction of Anne Leigh Cooper as Betsy Baker’s niece where she gives the show a jolt of vivacious enthusiasm that Meredith lacks in her performance.

The film’s only other real failings is having a low-budget. It makes do with a fairly ordinary house. This is particularly noticeable during the latter sections venturing into the afterlife limbo, which look merely like a Halloween haunted house on the cheap. The only familiar name the film has on board is Lance Henriksen who has a minor role as Meredith Majors’ father. Thereafter it has to make do with barely recognisable names like Betsy Baker, who was one of the girls in The Evil Dead (1981), and Marilyn Ghigliotti, the female lead in Clerks. (1994).