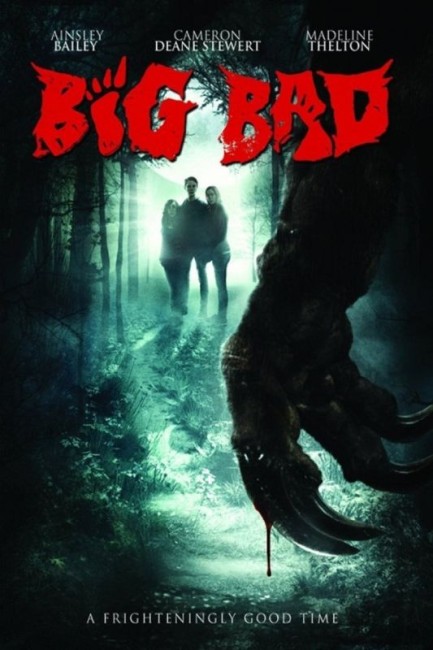 In the small town of Marion, Mississippi, three teens, Donny, Crystal and Chase, volunteer for Professor Howell’s fundraiser where they are to be locked overnight in the old jail that is undergoing restoration. This was the site of the legendary Jailhouse Massacre some years earlier. Not long after they are locked in their cells, the teens are attacked by a large creature that they believe to be a werewolf. Making an escape, they flee through the woods attempting to get help.

Big Bad was the feature-film debut from Opie Cooper, a Mississippi-based, self-taught filmmaker who worked in commercials for a number of years. He had previously written the short film Night of the Living Trekkies (2010).

Opie Cooper is clearly a fan of 1980s Steven Spielberg-produced kids-on-an-adventure films like Gremlins (1984) and The Goonies (1985) and this comes in a not dissimilar vein, even references to these other films. Even though the teens are in an age bracket that would usually have them more typically cast in slasher movies, Cooper has an affection for them and he and the actors approach them with a warm and witty sense of humour.

Cooper is not above ignoring the horror side of the show either – the scenes of the attack on the jail come with a real out of the blue jolt to them. The revelation partway through that what is pursuing them is not a werewolf but a Bigfoot is a bit of a head-scratcher but Cooper pulls it all together for a gory climax that is dependent on good old-fashioned makeup effects.

It is all engagingly put together, well played, both scary and funny in the right places and has a rare affection for its characters. I, for one, await more from Opie Cooper.