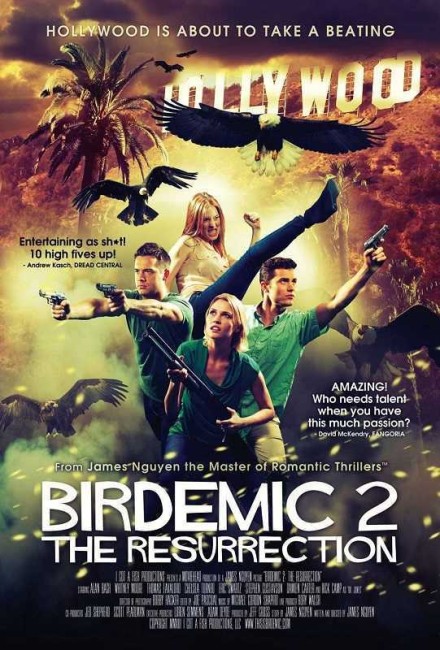 Bill is an independent director in Hollywood who is seeking funding for his next film ‘Sunset Dreams’. After meeting the waitress Gloria, he is certain that she would be perfect for the lead. His good friend Rod offers to bankroll a million dollars of the budget if Bill will cast his girlfriend Nathalie. After finding Gloria is about to give up on her dreams of being an actress and return home, Bill implores her to stay. He gives her an audition and decides to cast her in the lead. At the two start to become involved, a red rain comes down on the La Brea Tar Pits, resurrecting hundreds of prehistoric birds. The birds attack Los Angeles en masse, invading the soundstage just as they begin shooting the film. Bill, Gloria, Rod, Nathalie and several others flee and try to make it across the devastated city.

James Nguyen, a Vietnamese immigrant to the US since a young age, had a surprise word of mouth hit with Birdemic: Shock and Terror (2008), a self-financed homage to Alfred Hitchcock’s The Birds (1963). Birdemic became a sudden audience hit where it was greeted with the same derision as The Room (2003) for the laughable flatness of its dialogue and direction and, in particular, the woeful visual effects representing the bird attacks.

For reasons beyond sane comprehension, James Nguyen has decided to make a sequel to Birdemic with Birdemic 2: The Resurrection. I was trying to get a grasp of the reasoning behind Nguyen’s decision to make a sequel. He is, after all, following the thinking the regularly goes on in Hollywood that if one film is a hit then audiences will naturally want to see more of the same. The problem with cult midnight hits like Birdemic is that they are entities that audiences discover rather than are manufactured phenomena like a big-budget film that premieres with a mass market promotional campaign is. In light of this, it seemed unlikely the Birdemic 2 would be greeted by audiences in the same way all over again.

More than that, you think that if Nguyen is making a sequel with the greater money that would no doubt have been offered to him after Birdemic then would not a better polished film negate the very things that were being ridiculed (thus enjoyed) by audiences with Birdemic and all we would end up would be yet another B movie? You get the impression in all of this that Nguyen is not unakin to the slow or handicapped kid at school that others cruelly get to do ridiculous things and who keeps on doing them, mistaking being laughed at for other people liking him.

The surprise about Birdemic 2: The Resurrection is that it is exactly the same type of film as Birdemic was. I put much of the ineptitude of Birdemic down to James Nguyen not having much of a budget and resources and assumed they would have improved here – but aside from some slicker editing, Nguyen has gone and made exactly the same gapingly inept film that he did first time around.

The bird visual effects still look exactly like cheap graphics in a videogame, the film is still filled with the forced naturalism of actors that stand like suitcases and deliver the hilariously awful dialogue at one another. Despite all expectation to the contrary that you cannot replicate the same thing twice over, Nguyen has managed to do so exactly that. In managing to make a film that is so utterly inept twice in a row, I can say without any hesitation that I believe James Nguyen to be the worst director currently alive and working. He may well be the inheritor of the crown of the late Edward D. Wood Jr.

As a director, James Nguyen writes dialogue schematically and has his actors say it with no concept of allowing them to inflect delivery or give it emotional nuance. The scenes in the early half of the film with actors stiltedly talking together feel more like amateur actors doing a first read-through of a script. In the opening scenes, Thomas Favalaro greets waitress Chelsea Turnbo with the absurd line: “Are you an actress? … I thought so. There’s a movie star beauty about you,” which becomes even funnier given the flatness of the delivery. In another prize howler, Colton Osbourne, the kid from the first film, turns up (out of nowhere) and explains how his mother is not present: “I wish Susan could’ve been here but she got a disease from that fish that Rod cooked.”

There is an hysterical scene where during the middle of the flight from the birds the group stand around in the open and suddenly think about spinning the idea of attacking birds off into a film franchise – a scene where Nguyen’s attempt to be cute and ironically self-referential falls flat on its face. There is also a cameo by the tree hugger (Stephen Gustavson) from the first film who gets a ridiculous scene where he stands still, drops into lecture mode and puts everything down to global warming (a repeat of Nguyen’s subtext from the first film), which even comes with a speech where he explains about not having used toilet paper for years.

The visual effects are incrementally better than in Birdemic, although this is relatively speaking and what we have still ranks down as some of the worst CGI effects ever put on screen. The first ones we are greeted with are the laughable scenes of a digitally created pair of legs of a female bather beneath the surface of the water as she is menaced by a giant jumbo jellyfish (which consists of a very fake looking jellyfish slowly drifting about and occasionally bumping into her legs). When she is taken away from the beach to hospital, we even get a digitally created ambulance.

One of the funniest scenes is the flashback to the bird attack on a caveman and cavewoman – we have two people engaged in vigorous sex before we suddenly get a horde of the film’s birds moving horizontally and vertically across the screen pretending to attack them as the camera pulls back to show what is supposed to be a prehistoric wilderness looks suspiciously like the manicured lawn of a park.

The bird attacks are as ridiculous as they were in the first film. The first attack takes place inside a film studio, which has the cast pretending to fend off birds that fly about never seeming in the slightest to be interacting with them while shooting them off with automatics that seem to hold about 200 times more ammunition than they do in real life (and never once require reloading throughout). This is followed by a scene where they enter the shoot of a slasher film, which Nguyen has staged solely in order to have three topless women running around. There is the hysterical scene where the red rain causes the prehistoric birds to rise from the La Brea Tar Pits where hundreds of birds emerge from the water without even rippling it, while the rain only falls in front of the camera and never seems to cover the surrounding area.

There are all manner of random plot elements thrown in this time – aside from having the birds somehow resurrected from the La Brea Tar pits, Nguyen also has the aforementioned caveman and cavewoman resurrected and running around in furs and carrying a giant bone before encountering the party and getting into a brawl with them in the street. Later, there is an even more random scene where the group drive through the cemetery, the red rain appears and then they have to fend off a horde of suddenly resurrected zombies.

Once again, Nguyen appears to have no budget for ADR and so scenes are often rendered incomprehensible by on-location sound recording – blowing wind drowning out dialogue during the trip to the beach, or all the background noise coming through when Chelsea Turnbo answers the phone at the restaurant. In other laughable gaffes, we see camera people and sound booms all over the place – the mood in the love scene between Thomas Favalaro and Chelsea Turnbo is ruined by the clear reflection of a cameraman in the room’s mirror, while a sound person can be seen reflected on the window during the attack at the motel in the climactic scenes..

This time, Nguyen has shot in Hollywood (and various locales around the L.A.  area). This does lead to some amusing scenes where we see Thomas Favaloro walking down Hollywood Boulevard in the opening scene or where the foursome visit Venice Beach and background faces and the names of businesses have been digitised out. Clearly, it was cheaper for Nguyen to digitally blank out scenes to remove people who had not given him clearance rather than conduct reshoots from different camera angles or when the area was less busy or even hire extras. All of which leads to the amusing implication that Nguyen shot the scenes Edward D. Wood Jr style without any kind of official permission from city authorities.

There always seems to be a quasi-autobiographical element of James Nguyen’s films. All his other lead characters were former computer software salesmen (as Nguyen was) while here his hero has progressed to an independent filmmaker. In one scene, Thomas Favalaro tells Chelsea Turnbo of an uncompleted film project Replica (which was actually the name of a film that Nguyen shot in 2005 but never completed) and how his disappointment was not at failing to complete a project but at letting down his leading lady from which you seem to get the impression that Nguyen as a filmmaker is less interested in making films than in getting laid. Both of the Birdemic films have an extended first half that focuses around a hero meeting and falling for a woman. About half of either film is taken up by the meeting between a couple and their going out whereupon the birds attacks begin after they spend their first night together. (One wonders if Nguyen doesn’t have some weird type of relationship insecurities/commitment anxieties that keep bleeding through here).

Nguyen throws in Birds homages again – a visit to Tippi Hedren’s star on the Hollywood Walk of Fame, posters for The Birds and Hitchcock’s Vertigo (1958) on the wall of Thomas Favaloro’s office. Later when the group are escaping through the film studio, there is a mock-up of the ‘Welcome to Amity’ billboard from Jaws (1975).