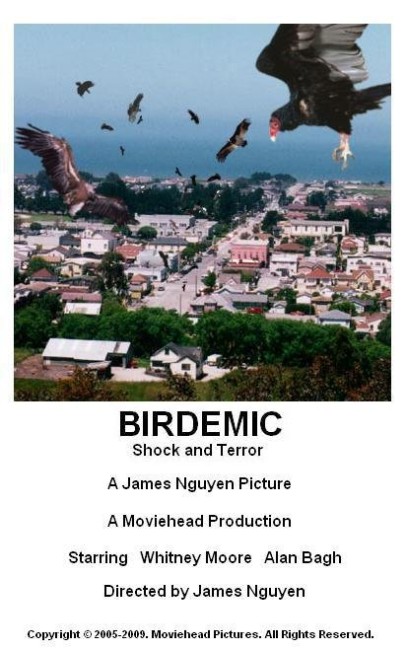 Rod is a successful software salesman in Half Moon Bay, California. He meets Nathalie, a girl he went to school with, in a restaurant and asks her out on a date. The two develop a relationship over successive dates. After they spend their first night together, they wake in the morning to find hordes of birds on the attack outside. They flee as the birds begin killing people everywhere. Gathering together with several other survivors, they try to drive to safety.

Birdemic: Shock and Terror became the new bad movie cult classic of the 2010s, joining other discovered favourites of recent years such as Troll 2 (1990) and The Room (2003). Birdemic first appeared in 2008, although nobody noticed it at the time. After director/writer James Nguyen travelled to the 2009 Sundance Festival to promote the film by hand, word of mouth about the film’s legendary badness spread and suddenly Birdemic became the new cult bad movie.

Birdemic: Shock and Terror is the brainchild of James Nguyen. Nguyen was born in Vietnam but fled when he was nine years old, taking up residence in the US. There Nguyen became, like the character played by Alan Bagh in the film, a successful software salesman and in 1998 formed his own filmmaking company Moviehead Productions to fulfil a dream of being a filmmaker. Despite having no formal training in filmmaking, Nguyen made two films before this with Julie and Jack (2003), which has a very similar plot to the first half of Birdemic about the computer software salesman looking for love, and the uncompleted science-fiction film Replica (2005). Birdemic: Shock and Terror was made on a reported budget of $10,000.

Far too often films are slapped with the Worst Movie Ever Made label by the hyperbole of people who clearly have not seen enough bad movies – Uwe Boll’s constant bad rap is one such example. If people want examples of the truly excruciating depths that low-budget filmmaking can scour, I invite them to watch the likes of Da Hip Hop Witch (2000) or Frankenpimp (2009). That said, Birdemic is one example of a film that fully stands up to what everybody is saying.

James Nguyen is a confessed fan of Alfred Hitchcock’s films and has fashioned Birdemic as a homage to The Birds (1963). Birds heroine Tippi Hedren is even third billed on the credits for a piece of footage taken from Nguyen’s Julie and Jack that momentarily plays on a tv screen. The film mimics the same structure as The Birds in having a couple drawn together in a California seaside town and then inexplicably being thrown into a nightmare as birds start to attack. For Hitchcock, the bird attacks seem precipitated by the arrival of mischief-making Tippi Hedren in town, while here in a dubious piece of Freudian symbolism, the bird attacks start after the couple spend their first night together.

For some reason, James Nguyen is insistent that what he was making was a romantic film. (It should be noted that all of his films up to this point feature a computer software salesman hero – Nguyen’s former profession – who is searching for love). The romantic first half is stultifyingly dull. Half of these scenes are cut up with Alan Bagh’s business dealings where James Nguyen seems to think that simply observing the dull minutiae of business and boardroom pitches is drama in itself. The two lead actors (Alan Bagh and Whitney Moore) have a basic minimum connection but Nguyen shuffles them through incredibly dull dialogue-heavy scenes or uninteresting montages of a visit a local pumpkin festival.

Perhaps the most noticeable of Birdemic‘s ineptitudes is the quality of sound recording. Clearly, James Nguyen has shot all of this in camera on location and has not had any funding for ADR or to reengineer the sound quality in post-production. Frequently the dialogue scenes have a conspicuous drop-off after the particular line is said, while there is often hiss and background noise that overrides what the actors are saying. This is at its worst during the scenes when the cast members visit the beach and the dialogue is rendered completely unintelligible by the sound of the nearby surf.

Nor do Nguyen, his photographer and editor have much idea of smooth continuity between shots, or of not allowing shots to run on past the point they have hit their dramatic peak. Everything is run over with a banally insistent score (mostly taken from online stock libraries from the look of the credits) that repeats the same limited cues over and over.

Of course, the most hysterically funny parts of Birdemic are when the bird attacks begin around the 45-minute point. These are the parts that have most audiences rolling in laughter. The birds simply hover flapping in the same two-dimensional position or else making simple right to left movements across the screen, having been digitally inserted over the live-action footage.

The pieces of digital and live-action footage frequently do not match each other in any way. In the scene where Alan Bagh and Whitney Moore are racing from the motel room to the car, the birds simply hover superimposed over the foreground but never interact with the actors who do their best to pretend they are being attacked. The killing of Catherine Batcha involves a bird superimposed over her face that in no way looks like it is pecking her to death. In some shots, the birds can be seen passing through trees.

Other pieces are frankly bizarre – for some reason, the initial bird attack on the town that heralds their appearance is accompanied by birds making dive bomber sound effects and causing explosions everywhere across the town, something that birds are not particularly noted for doing. The scenes where the party start shooting at the birds with semi-automatic machine-guns come out looking for all the world like graphics for a videogame.

Clearly, James Nguyen is wanting to make some ardent message about global warming with the film. You cannot miss this as he pushes the message at us at every opportunity – tv sets in the background feature news clips about forest fires or how polar bears are becoming dislocated by a vanishing icepack; talk of unseasonal heatwaves; the double-date the two couples go on is to see An Inconvenient Truth (2006), which causes Alan Bagh to get environmentally inspired, followed by a subplot where Bagh sets up a new company to sell cost-effective solar panels.

Clearly, James Nguyen sees the bird attacks as a metaphor for global warming. He inserts characters throughout the journey – an ornithologist who talks about how global warming is disturbing the birds, a tree hugger who talks about the death of the redwood forests – for the sole purpose of delivering dire messages about how humanity’ despoliation of the planet has brought about this situation. Like 1970s works such as Nightwing (1979) and Prophecy (1979), the monster movie dies a death of self-importance when what should be a symbolic undertow is overtaken by outright preachiness.

The acting varies. Alan Bagh, being the one who carries the show, stands out during the romantic scenes in the first half with his lack of personality and flat inflection of lines. He does okay when it comes to the second half, which principally requires him to do action scenes rather than act, although his dull delivery of some of the lines “Oh, look a fishing rod, I can catch some fish. Oh look, a stove, I can cook it,” is hilarious. Whitney Moore emerges far better because she has a sunny disposition and a modicum of acting ability – you actually sense she is projecting some of her self into the lines.

Mostly, it is the lines of dialogue themselves that are terrible: example being playboy Danny Webber’s romantic advice to Alan Bagh: “Chicks love cars. If you want to get into her pants, you need a nice hot Ferrari,” which gets the hysterical reply “She’s my hot Ferrari.”

With the success of Birdemic, James Nguyen went onto make a sequel Birdemic 2: The Resurrection (2013), which also features return performances from Alan Bagh and Whitney Moore and is just as bad.