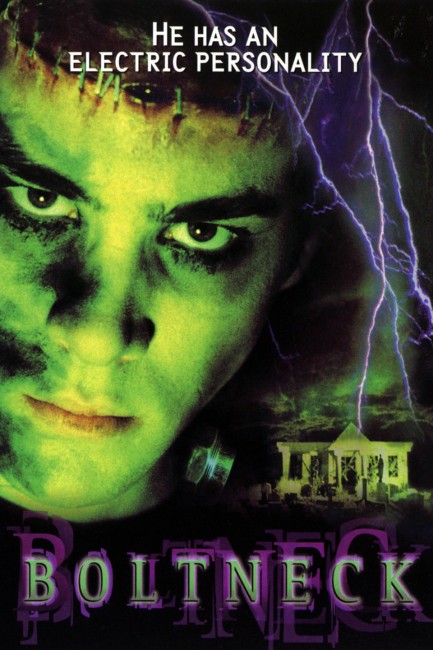 aka Big Monster on Campus

L.A. teenager Frank Stein is obsessed with his theories of being able to revive the recently dead using electricity. Two bullies brawl with Goth teenager Karl O’Reilly at a party and accidentally kill him when they push him into an empty pool. Frank takes the body and revives it, transplanting the brain of murdered killer Skeeter Wayne Dobbs into Karl’s head. At school, Karl’s now increasingly criminal habits end up getting Frank in trouble, especially with Macy, the girl of his dreams.

Bolt Neck/Big Monster on Campus is a children’s version of the oft-told Frankenstein tale. It is a rather dull translation of Frankenstein into schoolyard terms – the monster is now a big socially awkward Goth kid (placed by no less than Ryan Reynolds) revived after an accident at a party and with a criminal brain transplanted into his head.

Mitch Marcus directs with an infuriating dullness. In fact, after the initial experiment, the Frankenstein angle drops entirely into the background and the film becomes just another teen drama – Ryan Reynolds’ monster could with minimal rewriting be a troubled teen on the wrong side of the tracks that the good hero falls in with.

Director Mitch Marcus has made a bare handful of other films, including two other horror works with The Haunting of Hell House (1999) and Knocking on Death’s Door (1999), as well as writing the screenplay for The Force (1994).