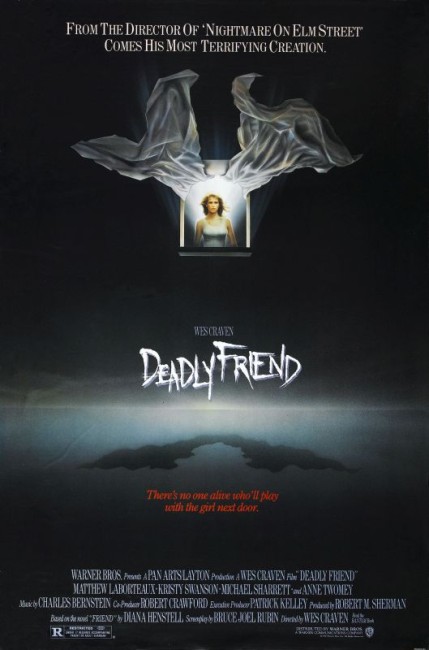 Teen genius Paul Conway and his divorced mother move into a new neighbourhood so that Paul can teach computer science at the local polytechnic while also studying for his medical degree. Paul befriends and falls for Samantha Pringle, the girl next door. He is upset when Dee-Dee, the beloved robot he has built, is blasted to pieces with a shotgun by crazy old neighbour Elvira Parker during a Halloween prank. When Samantha’s father catches her and Paul and kissing, he brutally beats Samantha, sending her falling down a set of stairs and leaving her in a coma. After the medics turn the life support machines off, Paul comes up with a crazy idea to save Samantha by stealing her body, implanting Dee-Dee’s computer chip in her brain and using it to restore her to life.

Craven badly lucked out with Deadly Friend. The film is adapted from an obscure 1985 teen horror novel and mounted as a combination of Frankenstein and the same year’s cute robot film Short Circuit (1986). The premise is lame and neither Wes Craven nor scriptwriter Bruce Joel Rubin go any lengths towards making it seem plausible. The raising of Kristy Swanson from the dead by use of a computer chip in the brain is an issue that stands out solely by distinction of its avoidance of any credible explanation. One may equally wonder why, when the camera takes the undead Kristy Swanson’s point-of-view, looking out through a perfectly normal pair of eyes, the shot is broken up into the same point-to-point scanning image used for the robot. Or how she suddenly obtains superhuman strength?

One of the recurrent themes of Wes Craven’s films is a fascination with dreams. However, this has never seemed more frivolous than here. There is one dream scene, which has gone onto legend in the annals of bad filmmaking, where Anne Ramsey’s head is splattered with a basketball. It is the one novelty point that Deadly Friend has and stands out in its terribleness. There is also a very silly twist ending that takes leave of the film’s tenuous grasp on logic and rhyme altogether.

Part of the problem with Deadly Friend was that the production company forced both Wes Craven and Bruce Joel Rubin to add extra splatter scenes to the film they were wanting to make. All of the splatter scenes – from Kristy Swanson stabbing her father with a vase, to Matthew Laborteaux dreaming her father’s burnt head is creeping up under his sheets – are amazingly silly. One can excuse some of Deadly Friend for such reasons, but it is still one of Wes Craven’s worst films.