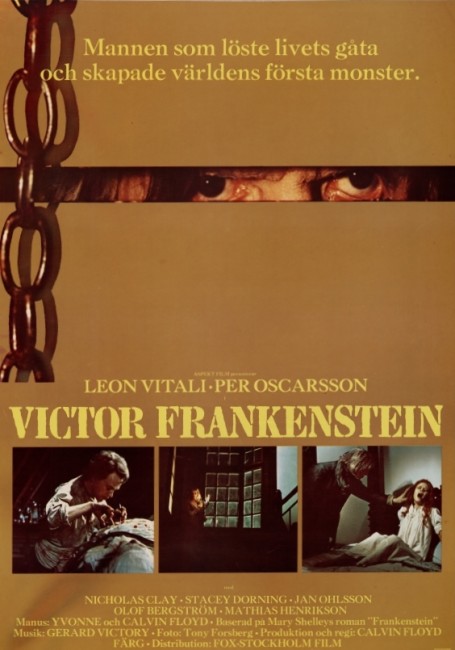 aka Terror of Frankenstein

Victor Frankenstein leaves his fiancé Elizabeth to go and study medicine in Ingolstadt. There he becomes obsessed with resurrecting the dead. He obtains a corpse and then reanimates it using a kite to harness the electricity of a thunderstorm. However, when the monster comes to life, Victor is horrified at what he has done. The monster follows Victor home to Switzerland where it kills his young brother William. Victor confronts the monster where it tells the story of how it fled, shunned for its hideous appearance. It now demands that Victor build it a mate. When Victor refuses, the monster promises it will be with him on his wedding night.

Victor Frankenstein was the fourth film from Swedish director Calvin Floyd. Floyd first appeared with the spy film Champagne Rose is Dead (1970) and followed this with the documentary In Search of Dracula (1975), which had Christopher Lee both narrating and playing Vlad the Impaler. Floyd was clearly a horror fan and next went on to make Victor Frankenstein, followed by the J. Sheridan Le Fanu adaptation The Sleep of Death (1980). Floyd appeared to disappear after that, only being credited as the screenwriter for the Cold War drama The Inside Man (1984). Victor Frankenstein was not widely seen – it was picked up for US distribution by Independent International, the distribution company of Z-budget director Al Adamson, where it was renamed Terror of Frankenstein.

Victor Frankenstein had the distinction of being the first film version of Frankenstein (1818) up to that point to treat Mary Shelley’s book faithfully. (See below for other versions and for more detail under Frankenstein Films). For many years later, it could still be considered that faithful version, although subsequent versions such as Mary Shelley’s Frankenstein (1994) and the tv mini-series Frankenstein (2004) may give strong competition as to who could lay definitive claim as all adhere to, add to and alter some of the book’s details in varying degrees.

Nevertheless, this was the first film adaptation of Frankenstein up to that point to include the Arctic prologue and epilogue with Frankenstein narrating his story to Captain Walton aboard a ship stranded in the icepack. Before this, both the tv movie Frankenstein (1973) and the mini-series Frankenstein: The True Story (1974) had touched on aspects like the monster killing Frankenstein’s brother and its hiding in the woodshed of the family in the woods and befriending the old blind man before running at the horrified reaction of his family, although neither version manages to use both of these elements together.

Oddly missing here are some key aspects like actually seeing Frankenstein piece the monster together from dead bodies. And especially any of the classic laboratory and revival sequences – all that we get are Leon Vitali flying a kite in a thunderstorm and then seeing Per Oscarsson’s monster abruptly awake on the table. There seems a surprising lack of drama to this particularly in comparison to the fabulous laboratory scene in the Universal Frankenstein (1931) and sequels or the Hammer films, which were filled with crashing lightning bolts and arcing pieces of equipment. You suspect that this may have been dropped due to budgetary reasons.

The film is operating on a moderate to low budget nevertheless makes quite a reasonable stab at attaining a sense of historical realism in the sets and costuming. There is none of the florid colour of the Hammer films, just a sense of ordinary naturalism. Frankenstein even manages to namedrop texts like Paracelsus and Albert Magnus, while we see a painting of the legend of Prometheus (a reference to the original subtitle of Mary Shelley’s book, The Modern Prometheus). It is a faithful adaptation but the main problem is that the adherence to the story’s telling and multiple use of flashbacks plus the naturalistic period setting and photography makes for a not particularly eventful film that is lacking in much of the way of horror effect.

The role of Frankenstein is cast with British actor Leon Vitali. At the time, Vitali had built up a modest resume working in British television and had a small role in Stanley Kubrick’s Barry Lyndon (1975). Victor Frankenstein was his only leading role – Vitali was married and was living in Sweden at the time. Shortly after this, Vitali gave up a burgeoning acting career to become personal assistant to Stanley Kubrick, which he fulfilled up until Kubrick’s death in 1999. There was even a documentary made about the process with Filmworker (2017) where Vitali gave the impression that the high demands of the job had reduced him to a broken husk of the person he used to be. Here though he fires the role of Frankenstein up with an autocratic arrogance that contrasts with his slight build – the effect is of a Napoleon figure trying to take on the world.