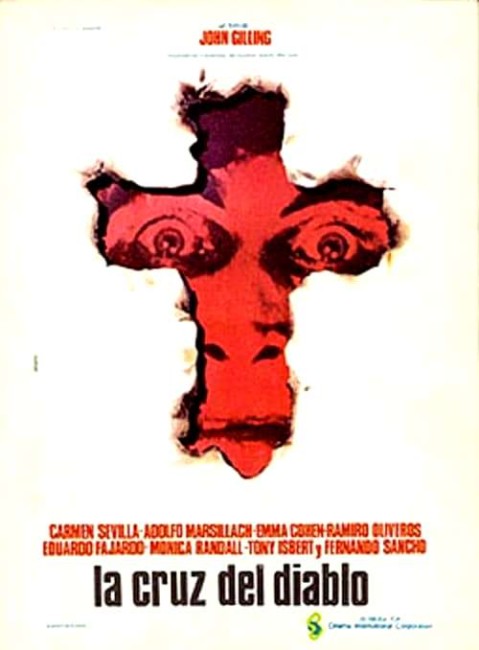 London in the 19th century. The writer Alfred Dawson receives a letter pleading for help from his sister Justine who is living in Spain. Alfred and his Spanish girlfriend Maria immediately set off to Madrid. However, when they arrive they are informed by Justine’s husband Enrique Carrillo that she is dead. Alfred learns that she was killed at The Cross of the Devil that lies at the foot of the Mountain of Souls. A man has been arrested for the murder. Dawson presses to see the accused but then finds that the man has committed suicide in his cell. Believing that is not the full story, Alfred insists on setting out to The Cross of the Devil to see for himself. He arrives on All Saint’s Eve, the night on which Knights Templars are reputed to return from the dead.

The Cross of the Devil was the last film from British director John Gilling (1912-84). Gilling had been working in the British film industry since the 1940s as a screenwriter and then a director, making a series of thrillers and crime films, before landing in the midst of the Anglo-Horror Cycle where he made two classic Hammer works with The Plague of the Zombies (1966) and The Reptile (1966), among others. (See below for John Gilling’s other genre films).

In 1970, Gilling retired from filmmaking and moved to Spain to take up a career as an artist. There he appears to have met Jacinto Molina aka Spanish horror star Paul Naschy, best known for a whole series of horror films in which he played the wolfman Waldemar Daninsky beginning with Frankenstein’s Bloody Terror (1968). Molina also produced a good many other films during this period. He apparently persuaded Gilling to come out of retirement – Gilling had not directed a film since Hammer’s The Mummy’s Shroud (1967). The Cross of the Devil did not receive wide distribution and was only dubbed into English in the 1980s.

It is clear that John Gilling was hired on his association with his Hammer films, which is something that Paul Naschy’s films frequently sought to emulate. Gilling has clearly been given orders to do the same here – create another horror film set in the same 19th Century setting. The resurrected Knights Templar element only comes in towards the end and makes The Cross of the Devil resemble something of the Blind Dead zombie films of Spanish director Amando de Ossorio, beginning with Tombs of the Blind Dead (1971), that were popular around this period.

The film adapts several stories by Gustavo Adolfo Becquer (1836-70), a celebrated Spanish poet and writer (although one not widely known in English – I could not find any translated copies of his stories available online, for instance). During the 1860s, Becquer published a series of tales based on local folklore and ghost stories. As the film only has a single plot, one suspects that fragments of Becquer’s stories were wound into the script. As it is, titles of various of his stories – The Mount of Souls and the titular The Cross of the Devil – have been used as locations in the film.

I was interested to see The Cross of the Devil based on John Gilling’s name and the fact he had made some reasonable films. Alas, the result is far from an undiscovered classic and one has full sympathies with distributors who declined to pick it up for several years. What we have feels like a Hammer film made on a far lesser budget. Or perhaps more so one of the Italian films of the Continental Gothic, albeit with all the black-and-white atmosphere and haunted mood taken out.

The Cross of the Devil is dreary. Almost the entire film takes place as a journey where nothing at all happens excepting strange women entering Ramiro Oliveros’s room to deliver cryptic warnings. Right near the end we meet Beatrix who would appear to also be the immortal version of the woman from one of the stories who sent a suitor to the Mount of Souls on All Saint’s Eve where he was presumably killed (something we never see) and is also the woman Oliveros has been dreaming about. In the last few minutes, the Knights Templar rise but Oliveros is easily able to eliminate all of them with a magic sword he just finds lying behind the altar of a ruined church. The end of the film suggests that all of this may be a hashish hallucination before Oliveros is taken away to be executed by what may be a devil figure.

Clip from the film here (in Spanish)