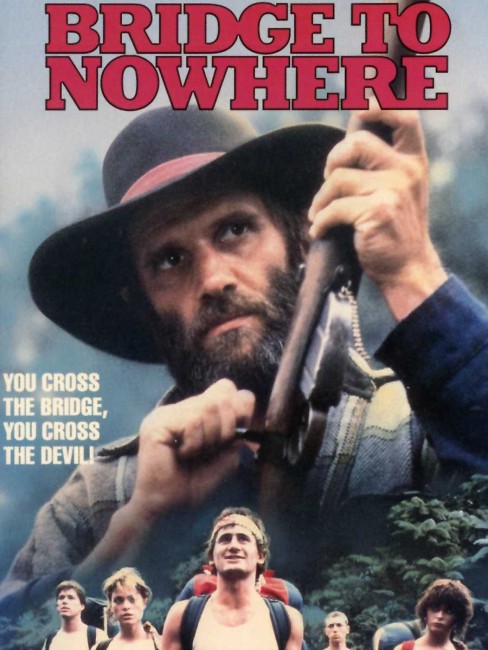 A group of friends trek up into the back-country bush to visit the half-overgrown ‘Bridge to Nowhere’. Tensions mount in the group as the leader Leon goes off his head. Leon spies on Lise, the girlfriend of a local farmer Mark, as she is bathing. He is found by Mark and is killed as they fight. Mark starts hunting the others on horseback, at first only to drive them away. However, as their blunderings get them lost in the bush, Mark starts to kill them.

New Zealander Ian Mune initially began as an actor – you can see him supporting Sam Neill in the Dystopian science-fiction film Sleeping Dogs (1977). Mune branched out as a director with Came a Hot Friday (1985) and has since kept a steady if unremarkable hand in amid New Zealand’s film industry with dramas like The Grasscutter (1990), The End of the Golden Weather (1991), The Whole of the Moon (1996) and What Becomes of the Broken Hearted? (1999).

Bridge to Nowhere was Ian Mune’s second film. It was made quickly following the local success that Mune had had with Came a Hot Friday. It is an efficient and not-too-badly made variation on the wilderness survival horror story – although Deliverance (1972) did it all better one cannot help but feel. The cliches of the genre are conducted with a minimum of fuss, and one or two twists added – like taking some sympathy for the backwoods psycho of the piece and making the antagonist and the leader of the group about as crazy as one another.

If the film has any underlying motif it is that sexual frustration makes guys go crazy – Philip Gordon goes off the deep end because he can’t screw Margaret Umbers; Bruno Lawrence’s backwoods farmer seems normal until he catches Philip Gordon peeping on the flaky Alison Routledge bathing naked and this drives him overboard into a fit of jealousy.

The cast are far more professional than one expects of the material – one can see them evidently being frustrated by the frequent banality of some of the lines they have to deliver. By now, Bruno Lawrence had patented the crazed Man Alone role so much that he could do it in his sleep. As with most of Ian Mune’s work as director though, there is nothing particularly remarkable about Bridge to Nowhere.