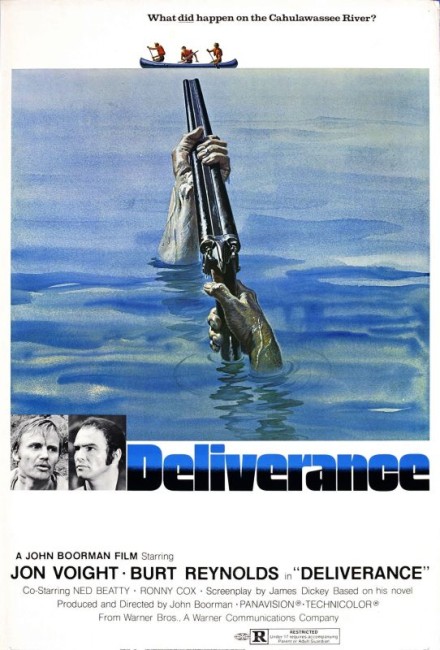 Four friends from the city go on a weekend canoe trip down the Cahulawassee River, the last trip possible before a new dam project will cover the entire area. The adventure turns into a nightmare when they are attacked and one of the group is raped by hillbillies.

When I first saw Deliverance in its uncut cinematic re-release, I found it a disturbing and powerful film. Subsequent re-viewing on video several years later somewhat lessened its impact. Although some of this may well be attributed to its being seen on the video screen rather than the large screen where, among other things, the crucial rape sequence has been entirely cut out (perhaps deliberately!) by the pan-and-scan squeezing of the frame.

Deliverance was highly acclaimed in its time, being nominated for a Best Picture Academy Award and John Boorman for Best Director. It, along with Straw Dogs (1971), was also highly influential, inspiring a genre of backwoods brutality films, which included the likes of The Last House on the Left (1972), The Texas Chain Saw Massacre (1974) and The Hills Have Eyes (1977) among numerous others.

It contains some genuinely harrowing scenes, particularly those where the hillbillies humiliate Ned Beatty, stripping him, riding him around like a pig, forcing him to squeal and finally anally raping him. Like the attackers in other films of the 1970s backwoods brutality cycle, the hillbillies are painted as being completely crazy. Watching their glassy-eyes toothless grins, there is no doubt that they are – they are not interested in money, reason or anything, they seem to exist as pure malevolent force designed to terrorise the lives of the suburbanites who stray into the woods.

However, Deliverance is a very different film to its many imitators. It does not fall into easy classification as a horror film as The Texas Chainsaw Massacre and The Hills Have Eyes do. That is because John Boorman is interested in other things, of which horror themes are only part. Many of John Boorman’s films, particularly the likes of Excalibur (1981) and The Emerald Forest (1985), are concerned with mankind’s mystical relationship with the environment. It is not hard to tell that this is a preoccupation of John Boorman’s – the initial part of the journey downstream here is loaded with portentous and meaningful phrases like “Sometimes you have to lose yourself before you can find anything” and comparing the river’s primality to a force that has to be fought.

The subtext beneath the film seems a dated one now but is nevertheless still potent. Humanity is seen to be engaged in a struggle with Nature. The initially assured male hunting ritual that we see at the start of the journey is battered down and stripped away throughout the duration of the film by a combination of Nature and something crazy that lives within it. There is the strong sense that humanity is being made to pay for violating the landscape, as symbolised by the dam being built that will cover the area. In a recurrent John Boorman theme, humanity must purify itself by undergoing a rite of passage – in this case, a stripping away of middle-class illusion and the cocksuredness of the hunters who set out with the intention of mastering the landscape.

The larger text in Deliverance is one where John Boorman concerns himself with the finding of heroism. If Deliverance had been made in the 1990s or by any other director it would have been a very different film. In contrast to a filmmaker like John Milius who engages in similar male rites of passage films, it is made clear by John Boorman that the individual who survives is not the macho aggressor represented by Burt Reynolds but someone like Jon Voight who is more milquetoast and works in symbiosis with the land. Boorman sets up a traditional macho hero in Burt Reynolds (who looks positively Neanderthal at times) but then paints the values he seems hellbent on trying to prove as being crazy.

Where in any other more full-blooded film, Burt Reynolds’ character would have been the one that decisively saves the day, he is put out of the action with a broken leg two-thirds of the way through and the film then becomes about quiet everyman Jon Voight’s finding of heroism. Voight’s Herculean struggle to climb the cliff and his fight with the hillbilly there, only to find it is the wrong person, is intense. The final dream coda of the film is not one of heroic triumph over the odds but of someone deeply haunted by events.

John Boorman has made a number of other ventures into horror and fantasy, although his ventures into the fantastic have an uneven tendency to fall either between brilliance or total pretension. These are:– the pretentious future Utopian sf film Zardoz (1974); Exorcist II: The Heretic (1977), widely considered the worst sequel ever made; the great adaptation of the Arthurian legends Excalibur (1981); the Amazonian rainforest drama The Emerald Forest (1985), which has Magical Realist elements; and the doppelganger film The Tiger’s Tail (2006). Boorman also produced the children’ fantasy film Dream One (1984). During the 1970s, Boorman also attempted to mount a live-action adaptation of The Lord of the Rings, while in the 00s he announced a new version of The Wizard of Oz, although this has yet to be greenlit.