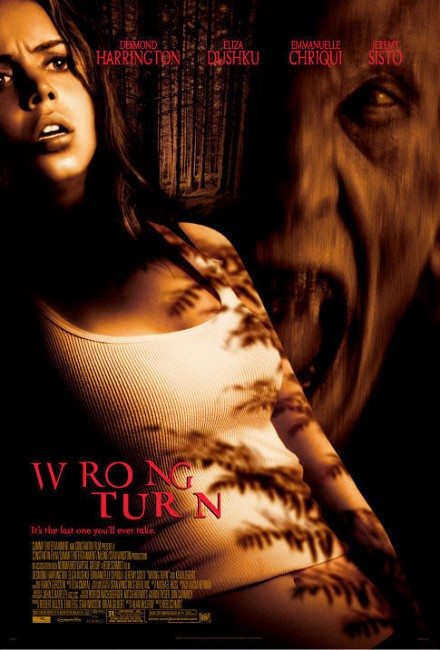 Chris Flynn is hurrying home to an appointment along the West Virginia highway when he finds the way ahead blocked by a jacknifed truck. He takes an alternate route along an unpaved backroad, only to crash into the RV of five friends that has had its tires punctured by barbed wire strung across the road. With both vehicles out of action, the group hike back along the road to get help. They then find themselves stalked and hunted by a group of genetically mutated in-bred rednecks with seemingly invincible strength who salvage the vehicles and feed upon the bodies of the victims they lure.

Wrong Turn is a modestly effective revival of the 1970s Backwoods Brutality genre. It is probably a film I would have rated more highly had I not seen the remake of The Texas Chainsaw Massacre (2003) only a week earlier. Wrong Turn was actually released in the USA several months before The Texas Chainsaw Massacre so one should not come down it heavily and call it derivative. Nevertheless, there are a remarkable number of similarities between the two films. The same year also saw an even further Texas Chainsaw Massacre homage with Rob Zombie’s House of 1000 Corpses (2003), while the basic idea of the brutality encountered after a backroads detour was given a not uninteresting spin in Dead End (2003).

In both Wrong Turn and Texas Chainsaw Massacre 2003, the Backwoods Brutality genre of 1970s films such as Deliverance (1972), The Last House on the Left (1972) and the original The Texas Chain Saw Massacre (1974) has been reprocessed through the modern teen horror film. In both films, we have a cast of good-looking twentysomethings played by just becoming known faces plucked from tv. In both films, said twentysomethings are pursued by a family of hideous and malformed backwoods in-breds; in both cases, the family cannibalise the bodies and keeps a graveyard of car wrecks belonging to their victims; in both, the family live in a filthy, rotting house strewn with debris and souvenirs taken from victims. In both films, the makeup on the in-breds (which here comes from Oscar-winning creature effects man Stan Winston, who also co-produces Wrong Turn) has been exaggerated to the point that it is almost cartoonishly overstated.

It is more a case of remarkable coincidence rather than derivativeness. Wrong Turn is modestly effective, even if it does fall in the other film’s shadow. Director Rob Schmidt does a reasonable job of generating suspense. The characters are not drawn with much more depth than the faceless victims that appear in slasher films but at least the actors cast do a fair and convincing job of bringing them to life, especially Jeremy Sisto in his seemingly improvised monologue about his and Emmanuelle Chriqui’s engagement. (The film does follow slasher movie cliché characterisations upon one point – it is the couple that have sex and smoke dope that are killed first). Like The Texas Chainsaw Massacre 2003, Wrong Turn should also be welcomed for dispensing with characters that are constantly ironically referencing their situation back to other horror movies – Jeremy Sisto does have a line of dialogue that refers to Deliverance, but that is it.

Where Wrong Turn falls short of being genuinely effective is ironically in comparison to The Texas Chainsaw Massacre 2003. Texas Chainsaw delivered the goods in terms of satisfyingly gory impact – one saw limbs being chainsawed off, bodies brutally impaled on meathooks and struggling to free themselves – but Wrong Turn in comparison almost delivers – there is a nasty shot of one victim lying on a table with a leg gorily amputated – but mostly shies away when it comes to providing as though it were ever so afraid of invoking the MPAA’s ire. It generates horror and a reasonable intensity, but ultimately it remains ever so toothless and safe in terms of pushing the envelope.

Director Rob Schmidt next made the true-life serial killer film The Alphabet Killer (2008) and The Boarder (2018) about a psychopathic tenant.