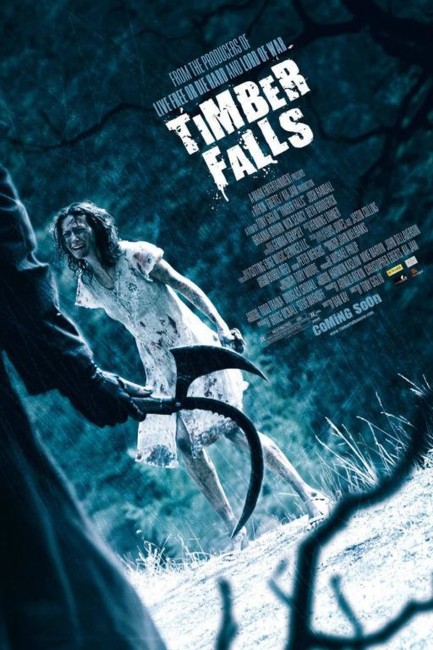 Mike Warren and his girlfriend Sheryl James go hiking in Lake Kumbrabow State Park in West Virginia. They are advised by rangers to stay to two recognized trails. After setting out, they meet a woman who suggests that much prettier scenery can be found if they take the trail up to Timber Falls. They do but are harassed by three redneck youths who come across them while having sex. They camp for the night but the next morning Sheryl fails to return after going to bathe in the lake. Searching for her, Mike attacks the rednecks, demanding to know what they have done with her. During the fight, he is caught in a bear trap. He is rescued by Ida, the woman they met on the trail earlier. Mike then discovers that Ida and her crazed family have Sheryl a prisoner in their cellar. The family are zealous Christians and force Mike and Sheryl to marry at gunpoint. They are then locked into a cellar room where Mike is expected to get Sheryl pregnant so that she can bear them the child that Ida is unable to.

Timber Falls is Backwoods Brutality by the numbers. It follows all the cliches of the genre – the unwitting city people straying off the beaten path in the woods; their encountering the taunting redneck hicks and in-bred family that live there; their being locked up in the basement where they are tortured and brutalised. The character of the deformed Deacon is a disappointingly poor copy of Texas Chain Saw‘s Leatherface – the film even lamely provides him with flash fantasies where he imagines Brianna Brown saying “I want you to fuck me, Deacon.”

You can see the plot twists coming waaaay in advance – when Josh Randall comes around in Beth Broderick’s house it immediately becomes clear that she is the one who has Brianna Brown locked up, while equally only the mentally impaired could not guess that Nick Searcy, the friendly ranger who quaintly enquires what congregation they belong to, is also part of the abduction. The epilogue set a year later where the couple are settled down with their baby and we then see Sascha Rosemann’s face lurking outside the window despite his supposedly having been killed is the type of tedious twist conveyor belt ending that induces groans.

The one element that Timber Falls adds over and above other Backwoods Brutality films is that the psychos of the show are religious fundamentalists. This certainly adds an intriguingly provocative undertow to the film. “Do not take the Lord’s name in vain in this house,” Josh Randall is severely warned. The best and most original parts of the film are the scenes when the family insist that Josh Randall and Brianna Brown be married at gunpoint and then lock them inside a room so that he can immediately get her pregnant. The nastiest moment is where Josh Randall is made to perform his breeding duties upon threat of dismemberment of the bound Brianna Brown: “All we need is a heart, brain and a uterus. She don’t need no fingers, no toes.”

As with most modern horror films, the level of gore is pushed to no-holds-barred extremes. The film opens with an intendedly attention-grabbing prologue where Suzanna Urszuly is crucified to a bench with spikes through her hands while in the next room her boyfriend is hanging chained up as the unseen psycho readies electrical leads, before she tears her hands out (with apparently nothing whatsoever in the way of blood loss) and makes an escape, running through the woods pursued, only to be cornered on a cliff edge and jump over to her death rather than be recaptured. The sadism is tamer than other films in the cycle but we get some nasty scenes where Brianna Brown’s index finger is chopped off, where Josh Randall is bloodily flogged, and a climax where Sascha Rosemann gets an axe in the head and Beth Broderick is beheaded.

Unfortunately, what kills the film’s conviction is the fact that it is well shot, comes with stunning picture postcard natural scenery (shot in Romania rather than West Virginia), handsome Hollywood leads and an actress who coyly avoids any nudity when taking her clothes off. All of these are elements of a processed Hollywood film, not one that purports to be a raggedly raw horror story.