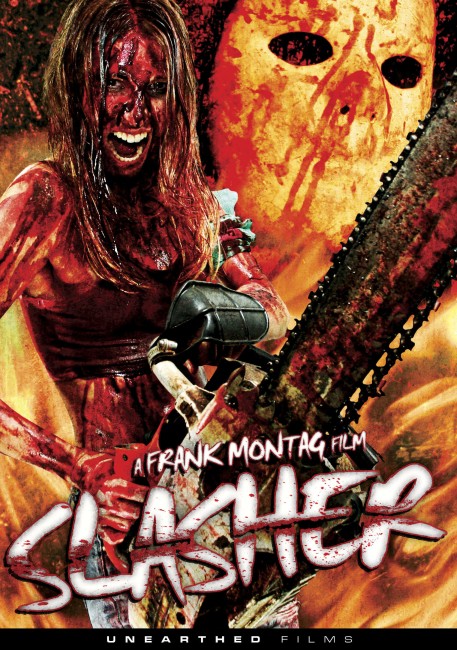 A group of university students go away camping for the weekend. While they are there, a hulking masked maniac with a chainsaw slaughters his way through the group.

In choosing the title it does, this German-made film sets up huge expectations. You feel that any film that appropriates the title of an entire genre creates the anticipation that it is going to be a defining classic of said genre; at the very least, it better deliver a helluva good film to justify its claiming such a name. And from the opening scene, which hits in with a good dose of all the things that a slasher film should have – axes, a maniac wielding a chainsaw, point-of-view shots as the killer creeps up on a couple making out in the woods, topless women, the couple butchered while making out amid plentiful gore, shakycam shots as the killer pursues victims through the woods – Slasher looks as though it is shaping as a promising return to the heyday of its 1980s namesake. Later there is a scene as the party sit around a campfire and tell horror stories that contains a stretch of dialogue where they try to define what a slasher film is, which pushes Slasher into the same arena as Scream (1996) and its attempt to create a parody/deconstruction of the slasher genre.

Only, Slasher fulfils none of this promise. It instead emerges as no more than a copy of The Texas Chain Saw Massacre (1974) that has been made twenty-five years too late. There has been an upsurge in Backwoods Brutality films ever since the remake of The Texas Chainsaw Massacre (2003). This took off in a big way in Europe with efforts such as High Tension (2003), The Ordeal (2004), Sheitan (2006), Them (2006), Frontier(s) (2007), King of the Hill (2007) and Eden Lake (2008), most of which put tame American counterparts into the grave.

Unlike most of these others, Slasher only repeats the basics but does so with no imagination or style and makes no attempt to do anything unexpected or different with the elements. The chainsaw wielding killer with his face hidden behind a mask is a blatant copy of Texas Chain Saw‘s Leatherface, for instance. The characters are the same blank cutouts that are found in any slasher movie (bar their speaking in German). There is no irony or genre in-reference – the most the film attempts to subvert the genre is in throwing in an in-bred backwoods family and having them turn out not to be the killers after all.

Slasher feels like an amateur film made by a group of teenage friends with more enthusiasm for the genre than they have film school experience. Director Frank W. Montag’s handling of actors seems awkward, while the dialogue scenes are lacking in greater nuance. This is particularly the case when it comes to the backwoods family the group encounter who are so caricatured that they verge on parody – the intellectually handicapped son who immediately starts pursuing one of the girls with a pitchfork, the father with a leprous skin condition who is having sex with his daughter. We are introduced to the father in an absurdly contrived scene where he is asleep in a chair and one of the girls puts her head down to his chest to see if he is alive only for him to wake up and grab her butt, which is as silly as it sounds. The gore is plentiful and at least occurs with a great deal of enthusiasm if uneven skill. The nastiest scene is where the killer has Maja Makowski tied up in a chair and then repeatedly stabs her to death with a knife in the vagina.

Where Slasher collapses into the pretentious is when it comes to throwing in a twist ending that reveals everything to be not a backwoods stalking but an elaborate set-up. [PLOT SPOILERS]. I am not sure I fully follow the end explanation but it appears that rather than being one of the stalked victims, Pia de Buhr is the brother of Mike Corman (Sebastian Badenburg), the masked chainsaw-wielding killer, and that everything was a set-up all along. Several years ago, Mike was a serial killer but Christiane Imdahl was one of his victims. She has (for reasons I don’t understand) forgotten or repressed most of what happened when she was abducted by him. In her escape, she set fire to the house, during which he was burned and facially disfigured. He and his sister then set this elaborate scheme up to get revenge on Christiane. It is a preposterous set-up, not the least of which it fails to explain why all the other members of the group and several other random victims are also slaughtered.