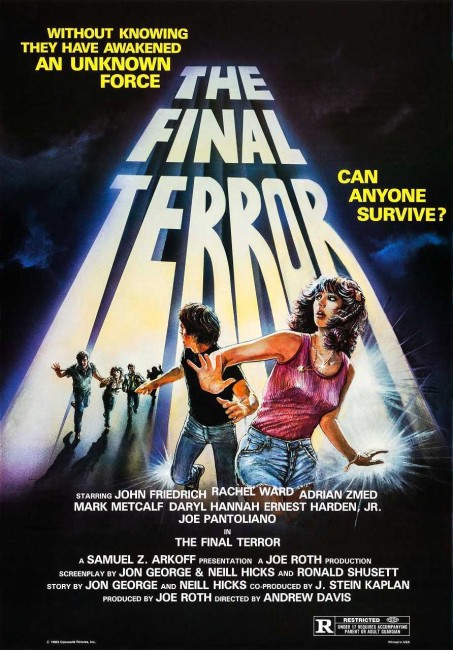 As part of their training, a group of novice forest rangers are sent on a hike in the woods where they are to raft downriver to a meeting point. However, as they camp in the outdoors, someone begins stalking and killing them.

The Final Terror was one of the films among the slasher cycle of the 1980s. It is not an effort that was widely seen at the time it came out – indeed, after being shot in 1981, it sat on the shelf for two years. It was only released in 1983 after the rise of Daryl Hannah’s name following Blade Runner (1982) where it did little business and was shuffled around under several different titles.

The surprise about it is that it seems to have far more effort placed into it than most slasher films, which were made on B budgets and with entirely unknown casts. It comes from legendary Hollywood producer Joe Roth who would go onto a long career producing films such as Young Guns (1988), Major League (1989), The Three Musketeers (1993), Daddy Day Care (2003), Alice in Wonderland (2010), Oz: The Great and Powerful (2013) and Maleficent (2014). It also features an amazing cast of names, all of whom were unknown at the time (see below).

You get the impression that the conception for The Final Terror came when someone had the idea of conducting a slasher movie variation on Deliverance (1972), but replacing Burt Reynolds, Jon Voight et al with a standard slasher movie complement of teens. The film gets an undeniable realism that most other slasher films failed to by going out and shooting in some natural reserve. This is not just a film that was made within easy walking distance of a camping site but where you can tell that the filmmakers took their cast, crew and equipment out into the wilderness.

All of that said, Andrew Davis fails to mount The Final Terror to anything particularly gripping. The suspense scenes are routine and unmemorable. Indeed, when it comes to the cast, despite the number of soon-to-be-well-known faces, the characters get so little development that it is often difficult to tell them apart. The film arrives at a predicable revelation of the identity of the killer and then wimps out at a non-ending where they gather together to defeat them.

The best performance in the film comes from Joe Pantoliano, known in later years for roles on tv’s The Sopranos (1999-2007) and in The Matrix (1999) and who would hit attention later the same year in Risky Business (1983). He plays the equivalent of the Crazy Ralph character in Friday the 13th (1980) muttering incomprehensible portents about the dangers of ‘theese thar woods.’ What makes the role is the wild intensity that Pantoliano gives is, especially when it gets to stories of where he abandoned someone in the forest and how they have never been seen again.

The rest of the cast includes Australian actress Rachel Ward who hit fame in the tv mini-series The Thorn Birds (1983), which was similarly filmed after but released before The Final Terror; Adrian Zmed, a hyped 1980s heartthrob as the lead in Grease 2 (1982) and Bachelor Party (1984), before winding up as a regular on T.J. Hooker (1982-6); Lewis Smith who was briefly touted as a 1980s name in films like The Adventures of Buckaroo Banzai: Across the Eighth Dimension (1984) and The Heavenly Kid (1985) but disappeared soon after; and Akosua Bousia, daughter of the former Prime Minister of Ghana who has had a minor acting career since.