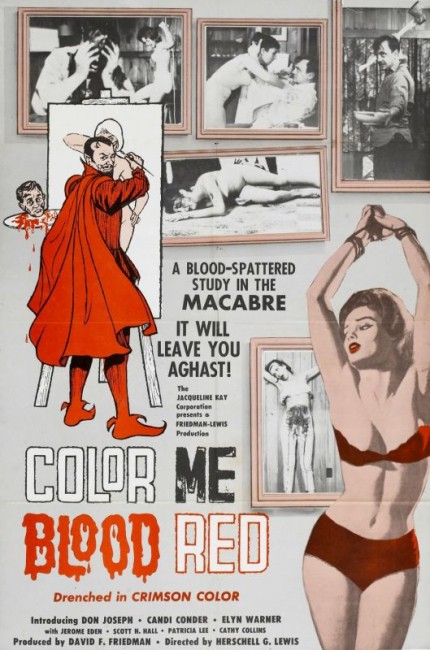 Painter Adam Sorg is frustrated by his lack of success and in particular resents the critic Gregorovich who viciously dismisses his work. One day, Adam’s girlfriend Gigi spills some of her blood on his canvas and Adam finds that this is the exact colour he is seeking. He attempts to finish the painting using his own blood but this is not enough. During an argument, he stabs Gigi and then realises that he can use her blood to finish the work. The resulting painting is received with great acclaim. However, Adam realises that he must kill again in order to find more blood to paint with.

Lewis has stolen the basic premise of Color Me Blood Red from the small hit that Roger Corman had a few years earlier with A Bucket of Blood (1959), a black comedy wherein Dick Miller played a beatnik who found acclaim after he encased dead bodies in plaster and passed them off as his artworks. There were several other films conducting variants on the concept of the murderous artist with the likes of Blood Bath (1966), Nightmare in Wax (1969), Sadisterotica (1969), Cauldron of Blood (1971), Crucible of Terror (1971) and Eddie the Sleepwalking Cannibal (2012).

Herschell Gordon Lewis’s films are badly made in all regards – technically, in terms of acting, writing and directorial skill. To Lewis’s credit, Color Me Blood Red is one of his better films. Lewis draws the characters passably well, even if the central roles of Sorg and his girlfriend Gigi both come across as not particularly likeable. Don Joseph is probably the best lead actor to appear in any of Lewis’s films, although in the bad acting department there is some bizarre and terrible mugging from Jim Jackel and Patricia Lee as two comic relief beatniks. Even the paintings that Don Joseph supposedly does with blood are not too bad.

There are all of Herschell Gordon Lewis’s extreme gore set-pieces – a scene where Don Joseph has girlfriend Elyn Warren chained up to the wall and is squeezing out her intestines to fill a dish with her blood so that he can paint with it, or the maggot devoured head of a body found buried on the beach.

In this regard, Color Me Blood Red is tamer than most of Lewis’s other splatter films (relatively speaking) – not as many killings and everything taking place within the constraints of a plot. The downside of this is that the film’s relatively short 74 minute running time is padded out with numerous filler scenes with the teens running around the beach. There is also a frenetic lounge bar muzak score run over everything.

Herschell Gordon Lewis always made his splatter films with tongue planted somewhat in cheek, something that people often miss. Color Me Blood Red has an undeniable sense of humour – amusing little throwaway bits like artist Don Joseph righting his painting in the background at the exhibition or just the way he emphasises “F stands for … Farnsworth.” The gore does look fake – there is a certain irony here in that the film features a plot about an artist using blood as a substitute for paint only for the effects department to substitute something that makes the blood look exactly like it is red paint.