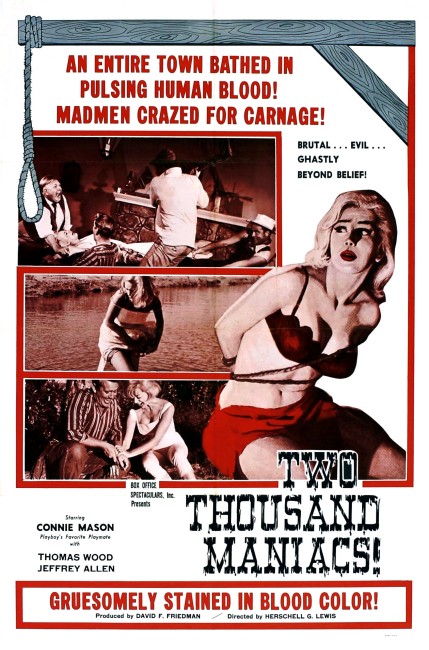 Various travellers are lured into the small Southern town of Paradise Valley by a detour sign. There they are welcomed by the locals who are in the midst of their centenary celebrations. However, the locals have sinister intentions and arrange sadistic deaths for each of the visitors. Those remaining discover that the township is not celebrating but instead taking revenge against Northerners for the massacre of the townspeople by Union soldiers during the Civil War.

As with the rest of Herschell Gordon Lewis’s films, Two Thousand Maniacs! is set around the splatter set-pieces – a woman is lured into a field by a paramour who maliciously cuts her fingers off, after which she is held down and her arm severed with an axe; a woman is tied down in the middle of a field while the locals throw baseballs at a target to drop a large rock on top of her; a victim is tied between four horses, which are then set running in different directions (although this scene is a cheat as all we see of this is one arm being dragged across a field); and, most imaginatively, a man is placed in a barrel, nails then hammered through it and the barrel rolled down the hill with him inside.

Two Thousand Maniacs! is usually spoken of as one of the best of Herschell Gordon Lewis’s films because it has an unusual twist ending that gives it something more – a unique surprise that turns it into a splatter version of Brigadoon (1954). Some of the anachronisms, like why the Confederates are driving around in 20th Century cars, are never adequately explained, nevertheless it does prove intriguing. Lewis also composes a truly amazing Confederate bluegrass song that acts as the film’s theme. There is the usual bad acting for a Lewis film, although the show is fairly much stolen by Vincent Santo as the obnoxious kid Billy.