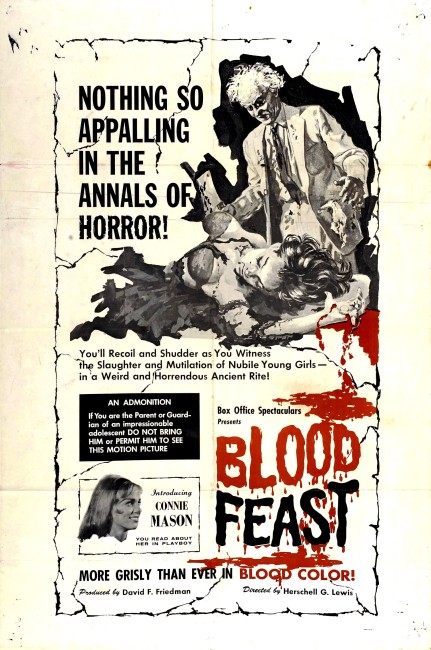 Police are baffled by a spate of killings where women are found brutally hacked up and with a different body part having been taken from each victim. Behind the killings is Egyptian caterer Fuad Ramses who is collecting the body parts to create a sacrifice to the goddess Ishtar.

Although there are several arguable antecedents, this Z-budget effort lays claim to being the first splatter film. Blood Feast also launched the career of Herschell Gordon Lewis. Lewis had made a half-dozen nudies in the early 1960s but was finding the marketplace overcrowded. Looking around for a new sensation, he hit upon gore and splatter. Following the film’s success, Lewis made a career over the next ten years out of similar films made on Z-budgets and with extreme gore as their only selling points. Blood Feast has a reputation as one of the least redeemable films ever made and Herschell Gordon Lewis was nominated as one of the worst directors ever by The Golden Turkey Awards (1980).

To the contrary, Blood Feast is one of those films that is so bad it exerts its own fascination for reasons that lie somewhere between the terrible and the outrageous. Some of the gore effects that Lewis serves up are astounding – the image of a girl lying on a beach blanket with her brains splattered over the sand behind her; and the truly amazing sequence where Mal Arnold reaches down one victim’s throat and rips out a raw bloody tongue about a foot long. (Clearly, Blood Feast is not a film that is meant to be taken too seriously).

At other times the film’s ineptitude is fascinating – trying to piece together the logic that the detective operates on is so bizarre as to appear almost surrealistic. The performances are all fascinatingly awful – Mal Arnold is spectacular to watch in the way he forcibly enunciates every single syllable of every line, even contorting his face to do so.

Herschell Gordon Lewis made various nudie and teen films throughout the 1960s. His other splatter films were Two Thousand Maniacs! (1964), Color Me Blood Red (1965), A Taste of Blood (1967), The Gruesome Twosome (1967), Something Weird (1967), The Wizard of Gore (1970), The Gore Gore Girls (1972) and fThe Uh-Oh Show (2009). In the early 1970s, Lewis retired from filmmaking. He was arrested for performing illegal abortions in the 1970s and then went on to become a direct-marketing millionaire, wrote several books about and lectured on the subject, before sporadically returning to filmmaking in the 00s, before his death in 2016. Herschell Gordon Lewis: The Godfather of Gore (2010) is a documentary about Lewis.

There were several attempts to mount a Blood Feast 2 since at least the 1980s. The splatter comedy Blood Diner (1987) was originally intended as a sequel but ended up being is mounted as a homage. Lewis finally returned to the director’s chair at the age of 76 to make a sequel Blood Feast 2: All U Can Eat (2002). Blood Feast (2016) was a remake.