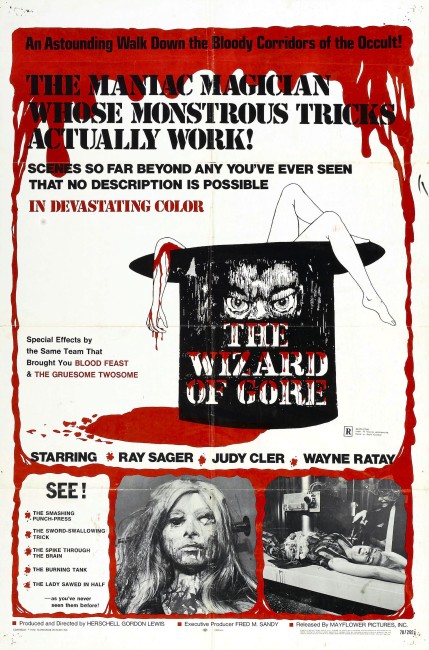 The stage magician Montag the Magnificent gains attention with his sensational act that involves the gory impalement and dismemberment of hypnotised women. Each act of slaughter is then revealed to be an illusion to the audience. A reporter and his tv critic girlfriend investigate and find that Montag’s stage volunteers are each dying after the performance in exactly the same way as Montag pretends to dismember them on stage.

The Wizard of Gore features some extremely heavy-duty gore – in a variant on the old sawing a woman in half trick, the magician chainsaws a woman in half; swords are impaled down throats; holes punched through bodies with drill presses; and in the most perverse effect – a spike pounded into a woman’s head and then her brains pulled out, the magician even reaching in with considerable glee to pop out one of her eyeballs. The lack of conviction to the effects – an appallingly unconvincing dummy head that the spike is pounded into, the swords down the throat being seen to bend – do not in any way undermine the full-on shock value they have.

Herschell Gordon Lewis’s films leave you constantly wondering what possible socially redeeming values they have. Indeed, The Golden Turkey Awards (1980) nominated Herschell Gordon Lewis for the lifetime achievement as worst director of all time – only to be beaten out by Edward D. Wood Jr. The Wizard of Gore is filled with much in the way of bad movie fascination.

Lewis develops this bizarrely heavy-handed style every time he wants to achieve directorial effect – cuts to closeups of Ray Sager’s eyebrows and hat filling the screen every time the audience are supposed to be being hypnotised or erratically abrupt (and unintentionally funny) cuts in the music to signal the change between illusion and a return to reality. Ray Sager gives an amazingly bad performance with eyes wide open and enunciating everything in virtual upper case.

The Wizard of Gore is usually regarded as the best of Herschell Gordon Lewis’s films because it has a playful double-structure that flips back and forward between reality and illusion and at the end even starts to toy with the illusion of the film itself – something that has given the film a certain academic legitimacy.

This play of illusion proves undeniably fascinating, never more than the bizarre ending where the heroine and her boyfriend start making out and he turns back into the dead magician and then, in a moment of solipsistic ingenuity, she decides he is an illusion and thinks him out of existence. Finally, the magician turns directly to the camera to taunt the audience, telling them to make sure that this is not all an illusion, that what they have been watching is a film.

Between the shoddiness of production values, its gut-churning but somehow not offensive extremes and weirdly fascinating and equally pretentious play of film, illusion and reality, The Wizard of Gore proves an undeniably appealing film.