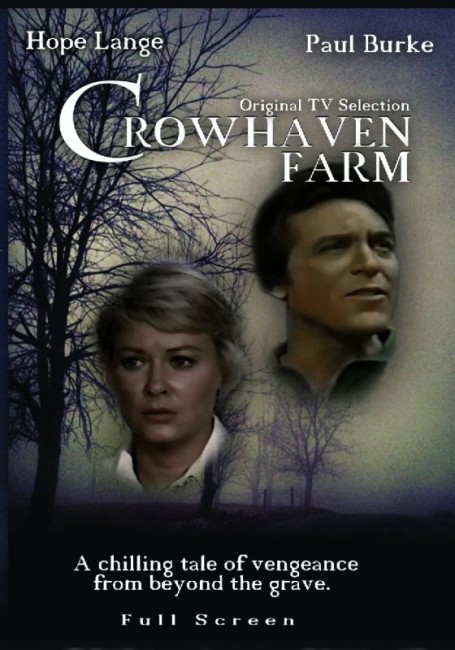 After their relatives die in a bizarre accident, Ben and Maggie Porter inherit Crowhaven Farm in Massachusetts. Ben is not having much success as an artist, while Maggie has been unable to conceive a child, and so they decide to move to the farm in the hope that it will rekindle their marriage. Soon after arriving, Maggie starts to be haunted by visions and dreams. She learns about Crowhaven Farm’s past and how a witch was killed there by Puritans in the 17th Century. Maggie then discovers that she is pregnant. However, the mysterious happenings surrounding them begin to increase.

Two years before Crowhaven Farm had come out, there had been the enormous hit of Roman Polanski’s Rosemary’s Baby (1968), which was followed by a number of films (and tv movies) that sought to copy that success. Rosemary’s Baby has an undeniable influence on Crowhaven Farm – there is the plot of the couple who move into a new home (a farm here rather than a New York apartment block in Rosemary’s Baby); the wife becomes pregnant in mysterious circumstances (the theme of the sinister pregnancy or malevolent children runs through most 1970s occult films); while it is discovered that there is a conspiring cabal of witches/Satanists surrounding them.

Crowhaven Farm also tries to add to the mix (somewhat) the other prevailing theme of early 1970s horror tv movies – the ghost story. The house here is haunted (or at least causes Hope Lange to have visions), while there is the theme in almost any ghost story of the sins of the past replaying themselves in the present. The eventual revelation of what is happening draws from films like City of the Dead/Horror Hotel (1959) and Black Sunday (1960) in the theme of condemned witches seeking revenge on the modern-day ancestors of their persecutors.

I was surprised in doing some reading around on Crowhaven Farm to see how many good reviews it gets. Although the codifier should come that most of these seem to be written by people who saw the film on tv when younger and have distant memories of it. Alas, Crowhaven Farm does not hold up that well today. Almost all of the horror movies made for tv during this era have the same problem in that the drama and scary incidents come across as contrived – largely because the film needed to build a spooky dramatic incident every few minutes before the commercial break. These would often be artificial in their placement or prove to be letdowns after the break was over.

Crowhaven Farm was directed by Walter Grauman, who premiered with the B-budget witch doctor film The Disembodied (1957), had earlier made the not bad brutality and assault film Lady in a Cage (1964) and had a modest hit with the war film 633 Squadron (1964), although spent the rest of his career (which stretched between the 1950s and 1990s) working in television. Seen today, Crowhaven Farm seems slow-moving, although does eventually pick up somewhat during the last third. The majority of the spooky scenes are so-so, although there is one good scene where Hope Lange is drawn out into the woods by sounds of crying that suddenly turn into taunting laughter.

The main problem with Crowhaven Farm is that not a lot seems to make sense in terms of what is happening. It is a film that seems based around creating a good deal of sinister effect – mysterious deaths, strange girls and sinister behaviour upon the parts of the locals – but not much in the way of underlying rationale for it. One can accept that events of the past are replaying themselves in the present but it seems far-fetched to go from a rerun of events of the past to [PLOT SPOILERS] somehow an entire town taken over by the spirits of the deceased just to wreak vengeance against one modern-day ancestor. That said, the twist ending the film goes out on with Hope Lange being killed by the same method her predecessor visited upon the witch – crushed by having a board placed over her body and then rocks piled on top of it – is memorable.

Hope Lange gives a dull performance, where she seems to move through the film without much in the way of expression. There is not a bad performance from Cindy Eilbacher who plays a girl who comes into the household where she manages to suggest something sinister going on beneath the facade of sweet innocence. Genre legend John Carradine turns up as a hayseed local handyman, although is not given much to do.