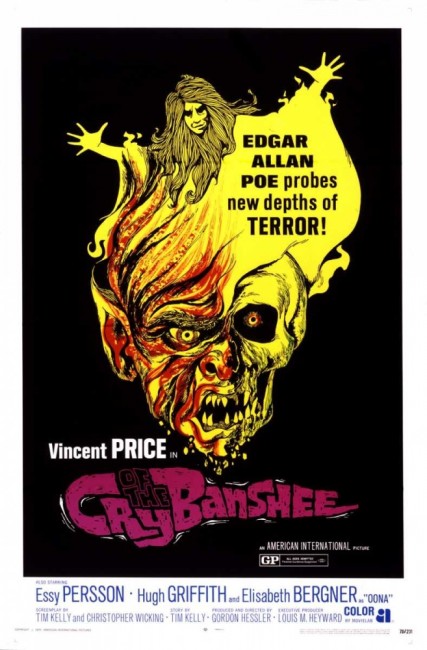 In 16th Century England, the puritanical magistrate Edward Whitman puts the followers of the witch Oona to the death, although deliberately spares her. She swears vengeance for this and calls up a manifestation of the Devil in the guise of the young, handsome Roderick. Roderick proceeds to charm his way into Whitman’s family and starts killing them off, each death occurring as though by a wild animal.

Cry of the Banshee was a drab effort from American International Pictures, which was made in England. At the time, AIP were riding on the success of Roger Corman’s Edgar Allan Poe films starring Vincent Price that had begun with The House of Usher (1960). They attempted to sell Cry of the Banshee as having an Edgar Allan Poe connection, even though there is no connection whatsoever beyond the quote on the credits. In fact, Cry of the Banshee has more in common with the brief fad for witch persecutions films that came out after Matthew Hopkins – Witchfinder General/The Conqueror Worm (1968) (and which also starred Vincent Price and Hilary Dwyer and came promoted with a fake Edgar Allan Poe connection).

AIP employed Poe series mainstay Vincent Price, while direction was handed over to Gordon Hessler, a regular hand who worked in the 1960s/70s Anglo-horror cycle (see below) and made two other loosely Poe-derived films The Oblong Box (1969) and Murders in the Rue Morgue (1971). The film itself was shot in England.

Cry of the Banshee is drab and extremely cheap looking. Patrick Mower’s transformations into a beast with glowing eyes have a cheapness that makes them come out rather ludicrous. The unconvincing plot fades away into a uniform drudgery and is overburdened with too many characters. The witchcraft seems an odd miscegenation of voodoo and classical Celtic mythology. Nothing terribly interesting happens throughout. The saving grace of the film almost comes in the twist ending, which is directed with such fervidity that it nearly makes the preceding proceedings worthwhile.

Vincent Price plays with customary professionalism but gives a nondescript performance. The histrionic antics of witch Elizabeth Bergner trying to conjure up a demon are guaranteed to have one rolling on the floor.

One of the peculiar trivia notes about Cry of the Banshee are the credits, which come from later-to-be director Terry Gilliam in the same tinted photographic cutout style that Gilliam used to great success in his work with Monty Python. The film also fails to feature any banshees, which is traditionally according to Irish folklore meant to be an old hag that wails to foretell someone’s death.