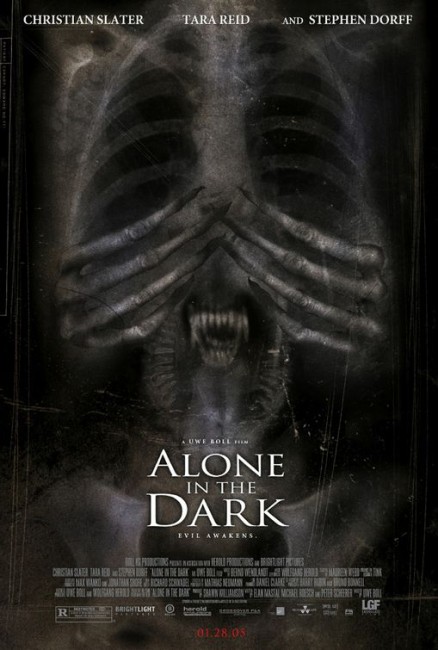 Archaeologist Professor Lionel Hudgens is obsessed with obtaining artifacts from the lost race of the Abkani who were believed to have the ability to open the way to other worlds. In 1969, Hudgens attempted an experiment to breed Abkani creatures together with 20 human children but the government’s paranormal investigation division Bureau 713 shut down the experiment. In the present-day, supernatural investigator Edward Carnby, one of the original experimental children and a former Bureau 713 operative, is attacked in the streets by a near-unstoppable man wanting the Abkani artifact that Carnby carries. Carnby reunites with his former girlfriend, archaeologist Aline Cedrac. The two are promptly attacked by Xenos, Abkani creatures that can only exist in darkness. To deal with the Xenos, Carnby is forced to clandestinely obtain special weaponry from Bureau 713. He, Aline, Bureau 713 head Commander Burke and a detachment of troops must venture down into an abandoned gold mine that has been taken over by Abkani creatures.

In the last few years, German director Uwe Boll has gained a reputation as possibly the worst director currently at work in the world. After making several films in Germany, Boll ventured into English-language with the psycho-thrillers Sanctimony (2000), Blackwoods (2002) and Heart of America: Home Room (2002) loosely based on the Columbine High School shootings. These received little notice but Boll’s reputation soared into infamy with his next three films – House of the Dead (2003), Alone in the Dark and BloodRayne (2005). All three films were adapted from computer games, as are most of Uwe Boll’s films. All three films received some astoundingly bad reviews where critics took issue with Boll’s lack of concern with connection to game canon; his random and seemingly indifferent plotting; his gratuitous and mindless action sequences; and the frequently absurd casting choices. All three films currently sit on the Internet Movie Database’s Bottom 100 films list. Uwe Boll has protested such reputation and in a bizarre publicity stunt took on five of his critics in a boxing match in September 2006.

Alone in the Dark is, like most of Uwe Boll’s films made during the 2000s, adapted from a computer game. The game in question is Alone in the Dark (1992) from Infrogames. Alone in the Dark was one of the earliest of the ‘survival horror’ games as popularised by the likes of Resident Evil, Silent Hill and indeed House of the Dead. In the game, one could play the role of paranormal investigator Edward Carnby as he explored a house filled with various supernatural entities. There were five Alone in the Dark game sequels, although some of these veered off into a more light-hearted tone much to the dislike of fans. Alone in the Dark (the film) is nominally a sequel to the fourth game Alone in the Dark: The New Nightmare (2001), although makes up its own plot for the most part. The film takes from the game Edward Carnby and Aline Cedrac, the two roles that a player could choose between as the central point-of-view characters; as well as Fiske, the Shadow Creatures and the arsenal of light-producing weaponry that is the only means of killing the creatures. All the background concerning the Abkani has been made up by the film.

Alone in the Dark is a film made up of seemingly random action scenes that often come without rhyme or reason. For no apparent reason, zombies and creatures burst out and attack people, whereupon Uwe Boll leaps off into massive outlays of artillery fire. The silliest of these action sequences is the one that comes in the first few moments with Christian Slater fighting a bald-headed man (Ed Anders) who suddenly attacks him in the street. It is an absurdly showoffy fight on Boll’s part with the two men slamming each through windows and doors; a shot where the camera follows a bullet as it goes through a block of ice; Anders running Christian Slater along a conveyor of rollers; and slow-motion Bullet Time jumps and poses. It is a sequence where one gets the impression that Uwe Boll is trying to impress more with visually dazzling shots than he is trying to make dramatically enthralling action sequences.

Much of the script fails to make sense. Or more accurately it leaves loose ends everywhere – we never learn why the Sleepers were created as Akbani half-breeds, what Hudgens was trying to create with his experiments or why the Sleeper zombies were activated. Uwe Boll purportedly had to go back and add material – like the introductory title card – to explain what was going on. The element of Abkani occultism that the film starts out talking about quickly drops by the wayside and Alone in the Dark becomes no more than another variant on Aliens (1986) with soldiers and creatures hunting one another through a complex. The film arrives at a downbeat social apocalypse twist ending that has been copied outright from Resident Evil (2002).

On the other hand, to give Boll his credit, Alone in the Dark is not a truly bad film. Indeed, I am not entirely convinced that Uwe Boll is the abysmal director that people keep insisting. His films have a technical competence and clearly Alone in the Dark is operating on something akin to an A- budget – Boll has assembled some reasonably impressive CGI creature effects and a massively-scaled outlay of military firepower and buzzing helicopters, none of which comes cheaply.

The film picks up and compensates for its seemingly unplotted first half once it gets down into the goldmine. There it starts to approximate the nature of a videogame with various traps and creatures constantly popping out. There are certainly far worse directors out there than Uwe Boll – you could put Uwe Boll on an equal rung with other B-budget directors in the genre/action field such as Richard Pepin, Philip Roth and John Eyres. Indeed, Boll’s films are a good deal more technically competent and better budgeted than any of these directors’ films are.

Amidst the cast, Christian Slater seems to be trying to patch together a career that once touted him as a major star name a decade ago. Slater is clearly no longer in A-list territory, nevertheless proves a reliable trooper. On the other hand, Tara Reid is absurdly miscast as an archaeologist, not to mention has an incredibly silly love scene that only draws attention to the fact that she remains clothed throughout. Stephen Dorff at least gets into the show with a good hard-headed performance.