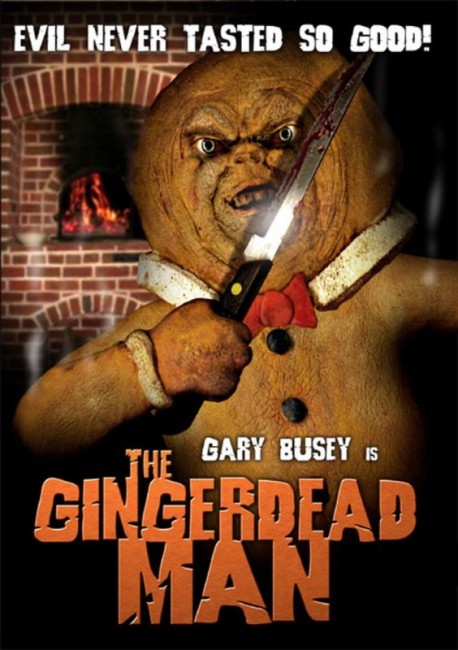 Sarah Leigh is the only survivor after Millard Findlemeyer invades the family bakery and kills her father and brother. One year later, Sarah is struggling to keep the bakery afloat on her own. However, she is facing pressure to shut her down from Jimmy Dean who is about to open a restaurant across the street. News then comes that Findlemeyer has been executed. Just as Sarah catches Dean’s spoilt daughter Lorna sneaking into the bakery to plant a rat, the gingerbread man she has placed in the oven comes to life. She realises that Findlemeyer’s spirit has been incarnated in the gingerbread man. It pursues her, Lorna and the workers around the bakery, determined to kill them all.

Producer and occasional director Charles Band has been one of the most prolific makers of low-budget films in the last half-century. Band began making movies in the 1970s. Along with his now late father Albert, the two formed Empire Productions in the 1980s and went on to set up Full Moon Productions and a variety of successors to that. During his time, Charles Band had put out multiple series of low-budget genre films including the Ghoulies, Trancers, Subspecies, Prehysteria! and Puppetmaster series, among many others. (See below for Charles Band’s other films as director).

The Gingerdead Man is another of Band’s low-budget monster movies and was promptly multiply sequelised and even crossed over with other Band creations (see below). For The Gingerdead Man, Band has purloined the plot of Child’s Play (1988) and sequels – Gary Busey’s Milland Findlemeyer is essentially a variant on Brad Dourif’s Charles Ray who, instead of reincarnating in a child’s doll, comes back to life in the body of a gingerbread man. Thereafter the two films follow near-identical paths with the Chucky doll/gingerbread man pursuing victims and despatching them along with taunted insults/one-liners. At which it must be said that Gary Busey is perfectly suited to doing the snarling badass taunts this sort of role requires.

Some of the Charles Band’s films have the virtue of a tongue-in-cheek approach that helps paper over their budgetary shortcomings. There is the ever so delightful scene here where a panicked Alexia Aleman calls her father on her cellphone: “Daddy, I’m at Betty’s Bakery and we’ve got homicidal baked goods after us.” The script sets out to make as many bakery related puns and one-liners as possible – characters are constantly tossing off lines like “shut your pie hole,” “tough cookie” or “give me some sugar, baby.”

On the other hand, The Gingerdead Man is hamstrung by its cheapness. Bar a couple of scenes, the action is confined to the storefront and kitchen of a bakery. Not even the scene where Gary Busey is executed is depicted. The title character is reliant on cut-price makeup effects from Band regular John Carl Buechler, which are even cheaper and less convincing than usual. Unlike say the dolls in the Puppetmaster series, the Gingerdead Man gets no personality beyond Gary Busey’s voicing and is a weak threat. Certainly, there is the appealing ridiculousness of one scene where the Gingerdead Man drives a car at a victim but the various despatches are otherwise unmemorable.