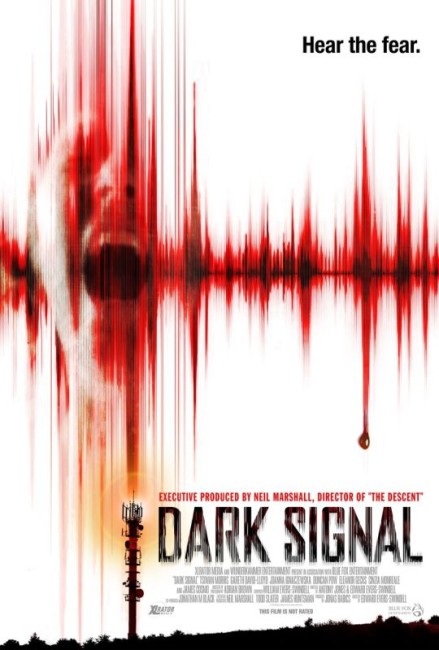 In South Wales, Kate Komisarczyk is struggling to pay the bills. She agrees to drive Nick Keller out to a remote farmhouse so that he can conduct a robbery, something that will net them a good deal of money. At the same time, the area is being plagued by a serial killer who has been nicknamed the Wedlock Killer because he snips the ring finger off his victims. Meanwhile, Laurie Wolf goes in to work for her last shift as a dj at Jab Radio before the station is to be switched over to digital. She decides she does not care what happens and is going to play whatever she likes. Psychic Carla Zaza is brought in to give an on-air reading. Laurie treats Carla with cynicism but starts to change her mind when her technician Ben picks up the voice of one of the Wedlock Killer’s victims in the background noise of the recordings. Back at the farmhouse, the robbery goes wrong and Nick is attacked. In venturing in to help him, Kate is imprisoned by the Wedlock Killer.

Dark Signal was the second film from British director Edward Evers-Swindell who had previously made the zombie film Infestation (2005). The film was executive produced by Neil Marshall, the high-profile director of the likes of Dog Soldiers (2002), The Descent (2005) and Doomsday (2008).

The set-up of Dark Signal seems promising – a double-stranded story that focuses on financially down-her-luck solo mother Joanna Ignaczewska as she is dragged into a scheme by a boyfriend to conduct a robbery of a farmhouse. Parallel to this is another story about dj Siwan Morris on her last shift at the radio station where she decides to break the rules and then in the course of an on-air interview with a medium they start to pick up a ghostly voice hidden in the recordings. Lurking around in the background and uniting both stories is a serial killer who has been nicknamed the Wedlock Killer for his habit of snipping off the victim’s ring finger.

This seems an ambitious juggle of elements for a ghost story and it looks as though Dark Signal has promise at the outset. Only this does not turn out to be the case. The main problem is that Edward Evers-Swindell drags either story strand out for an interminable time without payoff. The seance scene mid-way through does makes things undeniably interesting – even if the EVP idea has been lifted from White Noise (2005). There are several appearances of a ghost girl throughout. The first of these where she appears in the backseat of the car behind Joanna Ignaczewska holds quite a jump but thereafter her appearances, often accompanied by an amplified shriek on the soundtrack, seem increasingly schlocky. The film does eventually reach an effective twist that messes with our sense of time.

The other issue is when the twist and revelation of the killer’s identity becomes known, Dark Signal becomes far less interesting than it has seemed in the build up. PLOT SPOILERS] What we have largely only becomes another story about a heroine being menaced by a killer. While the film starts off strongly suggesting that it is going to be a ghost story of sorts, the scenes with the EVP manifestations and indeed the appearances of the ghost girl end up being of not much relevance to the way the story eventually plays out.