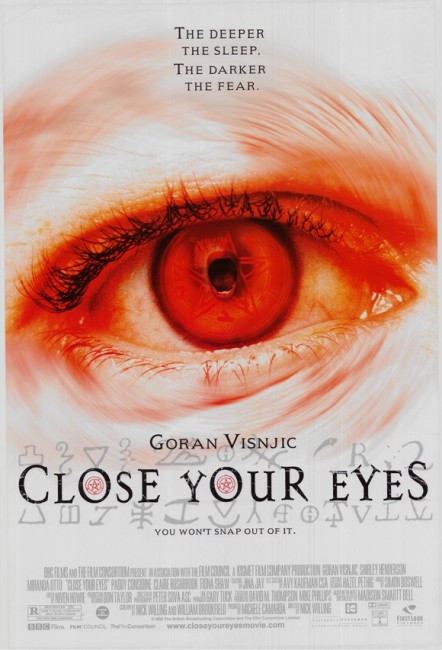 aka Close Your Eyes; Hypnosis

Policewoman Janet Losey goes to Michael Strother, an American hypnotherapist living in England, who advertises that he can cure people of smoking. She is amazed after he cures her in only a single session. She then forcibly requests Strother’s aid on a case – in helping with a young girl Heather who has been left catatonically mute after escaping from a serial killer that is plaguing London. Strother hypnotizes Heather and is successful in getting her to speak. He and Losey are drawn together in an effort to understand the killer’s fascination with the occult, including their apparent adherence to the beliefs of Francis Paladine, a philosopher who 500 years earlier believed in the ability to transplant minds between bodies.

Doctor Sleep – not to be confused with the subsequent Stephen King novel and its film adaptation Doctor Sleep (2019) – is a British horror film, co-produced by the BBC. It received only sporadic theatrical release and exists under several different titles. It was directed by Nick Willing, a promising genre contributor who first appeared with the excellent Photographing Fairies (1997) and since went onto the thriller The River King (2005), the horror film Altar (2014) and tv mini-series like Alice in Wonderland (1999), Jason and the Argonauts (2000), Tin Man (2007), Alice (2009) and Neverland (2011). Willing also conceived/produced the tv mini-series The Infinite Worlds of H.G. Wells (2001).

As a result of Nick Willing’s astute grasp of genre sensibilities, I had high hopes for Doctor Sleep but ended up being disappointed. A large part of the problem with the film is a confusing and disjointed screenplay. Goran Visnjic, for example, goes from being a mere hypnotist to seemingly also being able to read minds. Although, after he reads the little girl’s mind, this ability is never dwelt on again. During her hypnosis session, Shirley Henderson sees the image of the girl inside her dream and queries Goran Visnjic what she is doing there but no answer is provided and then this is also forgotten and never mentioned again.

For nearly the first 30 minutes of the film, Nick Willing has us involved in the drama trying to piece together what the little girl knows and find the Tattoo Killer – yet during this time we never learn anything about the little girl’s story or even what the killer is up to. The effect is akin to watching a detective thriller mini-series but having come in during the second episode and missed vital information. The melange of hypnotism, serial killer thriller, occult symbolism and seeming clairvoyance makes for a disjointed thriller where it is not clear what is happening.

Furthermore, there are also several annoying red herrings – it is hinted that Goran Visnjic has a shady past and may not even be who he claims he is but this is later revealed as misdirection. Likewise, someone appears to be sinisterly stalking Visnjic but this improbably only turns out to be a tabloid photographer. Even Goran Visnjic’s abilities as a hypnotist, while captivatingly built up in the first half, are forgotten as the thriller aspect takes over and prove of no further relevance to the story until the climax.

Certainly, Nick Willing creates some captivating scenes – like Shirley Henderson’s initial hypnosis session where Goran Visnjic asks her to imagine standing on a green bank opposite a lake and then as she exhales smoke, this comes to pollute the sky and water. The hypnosis session with the little girl is also fascinating with Goran Visnjic’s use of a tv to entrance her and the conjuration of an image where she is swallowed up inside a star. There is a nasty scene where one victim has a rat sewn up in their stomach.

The film does pick up somewhat at the climax, which features an effective surprise revelation that Paladine is still alive, and with scenes where Goran Visnjic is tied up and having his blood drained, someone has a spike hammered into their eye and Visnjic trying to escape his fate by hypnotizing the girl to free herself from her confines. Alas, the effectiveness of this is considerably undone by a twist ending that goes on out on a hackneyed cliché that was done to death in films like The Witches/The Devil’s Own (1966), Brotherhood of Satan (1971), Nothing But the Night (1972) Restoration (2016) and holds no surprise whatsoever.

Goran Visnjic, best known from ER (1996-2009), has a handsome presence. On the minus side, Scottish actress Shirley Henderson, best known as Jude in the Bridget Jones films and as Moaning Myrtle in the Harry Potter series, is badly miscast as a tough woman police detective. Though aged 36 at the time the film was made, Shirley Henderson looks more like a petulant twelve-year old trying to act like an adult and is completely unconvincing in the part. Australian actress Miranda Otto of The Lord of the Rings fame has been imported as Goran Visnjic’s pregnant wife and affects a convincing American accent in an otherwise forgettable role.