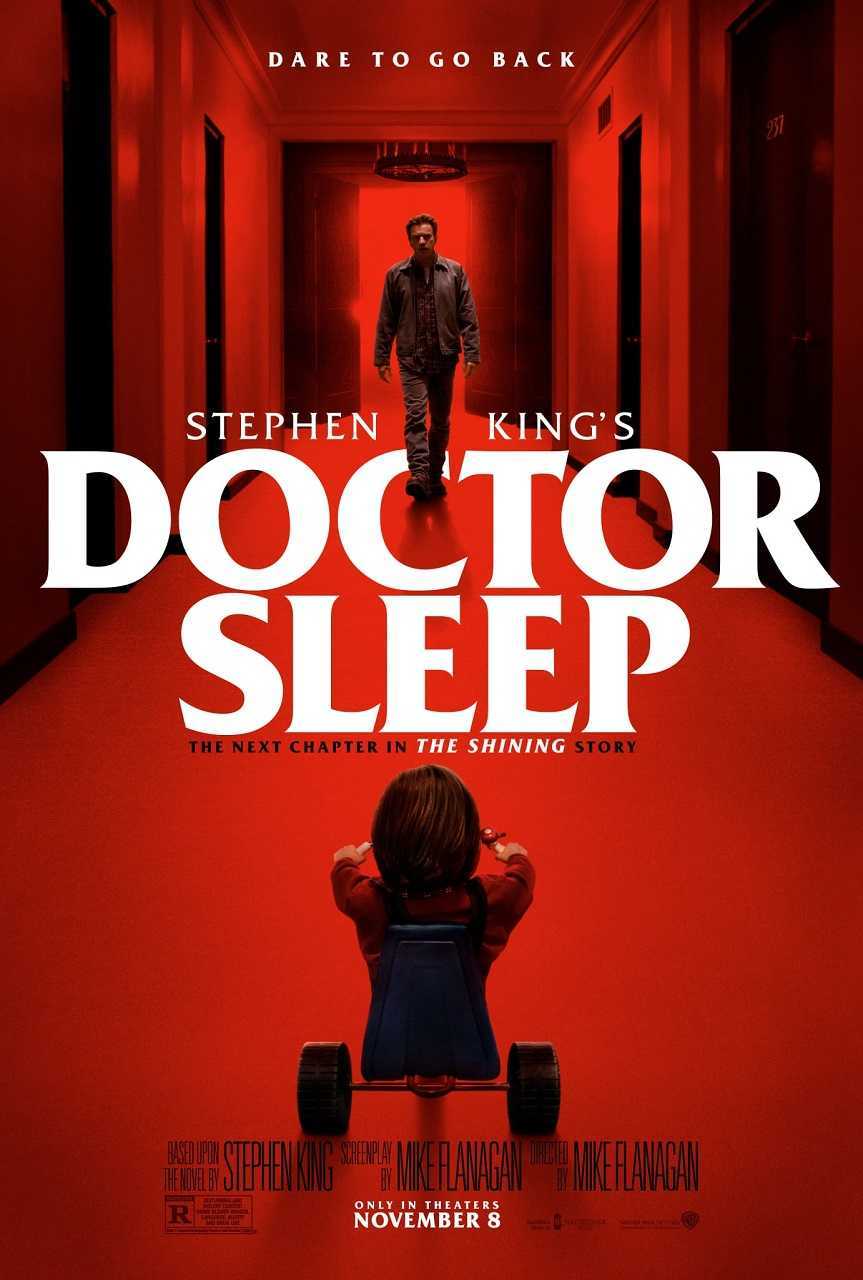 As a child, Danny Torrance survived the horrors of the Overlook Hotel. In 2011, the grown-up Dan is a drifter abusing alcohol to dampen his shining. He winds up in the town of Frazier, New Hampshire where Billy Freeman helps him get a room and introduces him to AA. Dan cleans his life up and gets a job as an orderly at a hospice. There he earns the nickname Doctor Sleep for using his gifts to help patients pass over in their dying moments. He is then contacted by the similarly psychically gifted child Abra Stone who communicates by chalk messages on the blackboard in Dan’s room. Abra warns Dan about The True Knot, a group of psychic vampires who roam the countryside and prey upon those who have the shining. However, Abra’s determination to find who the True Knot are has attracted the attentions of the leader Rose the Hat. As Dan realises he must step up to protect Abra, this means returning to the place he would rather not – The Overlook Hotel.

Although it was regarded with a divided reception when it came out, Stanley Kubrick’s The Shining (1980) has become regarded as a genre classic. The IMDB lists literally hundreds of other films and tv shows that have quoted from it (although some of these connections are fairly specious). There is an entire documentary Room 237: Being an Inquiry Into The Shining in 9 Parts (2012) where various people offer up completely whackadoodle theories as to the hidden meanings inside the film. Or the fact that no less than Steven Spielberg conducted an elaborate reconstruction of scenes from the film in Ready Player One (2018).

Kubrick based the book on the Stephen King’s third published novel The Shining (1977), although King was not at all happy about Kubrick throwing out major sections of the book. King later regained the rights and remade the book as the tv mini-series The Shining (1997), which is much more faithful to what he wrote and one of the better works from the perpetually ham-fisted Mick Garris, although ironically this is dismissed by fans of the Kubrick film. King recounts that he was often asked by fans during signing sessions about what happened to Danny the kid from The Shining and began work on a follow-up in 2009, publishing the result as Doctor Sleep (2013).

The director’s chair of the film version goes to Mike Flanagan who has proved himself of considerable worth in the last few years after his appearance on the horror scene with his fourth film Absentia (2011). From there, Flanagan went onto the likes of Oculus (2013), Hush (2016), Before I Wake (2016) and Ouija: Origin of Evil (2016). In the last couple of years, Flanagan achieved much acclaim with his adaptation of King’s Gerald’s Game (2017) and in particular the tv mini-series The Haunting of Hill House (2018). Flanagan’s name holds a great deal of promise – one that gives more hope for Doctor Sleep that the ominous name of Hollywood’s single worst scriptwriter Akiva Goldsman lurking on the credits as a producer. Goldsman has laid a swathe of atrocities across genre material with everything he has adapted and produced from Batman & Robin (1997), I, Robot (2004), I Am Legend (2007), the previous King abortion The Dark Tower (2017) to Star Trek: Discovery (2017- ).

Mike Flanagan has a daunting task ahead of him – that of sequelising The Shining, a film that is widely regarded as a masterpiece. He also has the not unenviable task of trying to adapt King’s book, which serves as a follow-on from the original The Shining book, and trying to turn it into a follow-on from The Shining the film at the same time.

Flanagan’s balancing act between the two interpretations is evident in the opening scenes where we flashback to Danny as a child and Flanagan replicates Kubrick’s Steadicam shots following Danny’s tricycle through the hall and across the distinctively patterned carpets, entering Room 237 to see the hideous old hag in the bath. Alex Essoe, who played the novice actress in Starry Eyes (2014), is made up to resemble Shelley Duval even down to the same hairstyle and clothing. The effort to adjust King’s book to follow on from Kubrick is most evident in the return appearance of Dick Hallorann (now played by Carl Lumbly) only a few scenes later. This perfectly replicates the scene in the book, right down to using the same dialogue, but for one fact – Kubrick killed Hallorann off whereas King did not. Now Hallorann appears to Danny as a ghostly companions (and continues to make several other appearances throughout, which he does not in the book).

Flanagan is surprisingly faithful to the novel. This does leave him making a film about the two things in the book that Stanley Kubrick seemed entirely disinterested in – namely the shining itself and Jack’s alcoholism. These were either trimmed down to hardly anything or sidelined altogether. Danny did display the shining and there was his connection to Hallorann but it felt peripheral to the story, there was no sense (as we get here) that the hotel wanted to prey on Danny’s ability.

The other aspect was Jack’s alcoholism, which King wrote as a mirror of his own struggles with the bottle. Kubrick seemed more interested in making a film about the issue that was closest to his heart – writer’s block – which does not even feature in the book. Kubrick erased all reference to Jack’s alcohol struggles apart from the scene where Jack Nicholson enters the bar and says “I’d give anything for a drink” – but this came without any of the context that King gave it where Jack was trying to stay dry. By contrast here, Mike Flanagan gives Danny a similar struggle and we get a number of scenes with Ewan McGregor attending AA meetings – even a scene where he recounts one of the key events from the book that was never used by Kubrick where a drunken Jack broke his arm as a child. Flanagan replicates the scene where Jack enters the bar but here has Ewan McGregor resisting as Lloyd the bartender, who also becomes Jack (an eerily well cast Henry Thomas), tries to tempt him into taking a drink.

The one thing key to Danny’s psychology that Flanagan does not much touch upon is the scene we get early on – where we are introduced to Ewan McGregor in fact – where he steals they money from solo mother Deenie’s wallet. We get a later flashback where we see that this directly led to the deaths of her and her child but not the sense that we get in the book of how Danny is haunted by guilt over doing so and it becomes the impetus to clean his life up.

I anticipated Doctor Sleep. When I read the book, it was a genuine page-turner that I raced through in all of about two days. It had a breathless pace and there was an immense excitement to the scenes of Abra waking to her powers and particularly the cross-country nature of the plot flipping between various point-of-view characters as King took great delight in pulling the carpet out from under us. Any film that could replicate that would be intensely exciting.

Mike Flanagan gives it a good job. The film has a running time just over three hours (which may well have added to its’ substantial box-office disappointment – part of this may also have been the studio’s decision to release the film in the midst of the Christmas 2019 season). The greater running time gives Flanagan much more ease with the storytelling. As with Gerald’s Game, he is surprisingly faithful to the King text, replicating many scenes like the friendship with Billy Freeman, the murder of the baseball boy, Abra and Rosie the Hat’s psychic connections, the death of Grampa Flick, the messages on the blackboard, Danny becoming Doctor Sleep and his first meeting with Abra – all are almost exactly the way that King wrote them on the page. Flanagan does depart from King towards the end – more on that in a minute. But it is a very satisfying sense you don’t often get in a multiplex release these days of a film that is invested in its source material and is taking the time to tell it

I enjoyed the adaptation of the book. The film was slightly on the slow side and I was waiting for Flanagan to get to the middle of the story with the hunt for Abra. This we eventually do but Flanagan has trimmed these sections down somewhat. There is some excitement to the scenes of Rosie and Abra invading each other’s minds. Flanagan follows King right up until the scenes in the woods where Danny and Billy eliminate the True Knot. (King by contrast had most of them survive until the end and Rose using them to prepare a trap at The Overlook). This comes as somewhat of a jolt. There is a reason for it – namely that it turns the climactic finale at The Overlook into a showdown between Danny and Rose without cluttering it up with other figures in the background.

The main problem with these scenes and the reason they don’t quite kick into the high gear that they did in the book is that Flanagan never quite animates the character of Abra. Kyliegh Curran, a novice actress making her screen debut, is okay in the role and has a sunny presence in many scenes. On the other hand, what I was expecting of the part after reading the book was something akin to the phenomenal gifted child performances of Drew Barrymore in Firestarter (1984) or Dakota Fanning in Taken (2002). Curran is passable but the character never seems someone bubbling with amazing power – well she does but it seems to be the case more because the script tells us she is than something she projects on the screen – while the scenes with her demonstrating her abilities with kitchen knives seem perfunctory. On the other hand, Flanagan gives far more emphasis to the scenes with Rose where Rebecca Ferguson gives a performance that actually ends up stealing much of the film out from under everyone else.

This does bring us to the extended last forty minutes. Here Flanagan has taken the opportunity to pay a good deal of homage to the Kubrick film and gives the return to The Overlook far more prominence than King did. We get exactingly detailed recreations of the Overlook barroom, the red and white toilet, Room 237, the apartment area with the axe hole in the door and the bathroom window through which they made an escape, the cavernous foyer where Jack’s typewriter still sits, the snow-covered hedge maze (still no topiary animals, even though CGI effects would have been perfectly able to replicate them), the elevator of blood, various of the ghost characters including Grady and the twins. There’s even scenes cruising through the Colorado mountains while Ligeti plays on the soundtrack.

Flanagan also sets up extended scenes designed to replicate ones from The Shining like having Ewan McGregor pursuing Kyliegh Curran with an axe – even a scene where he backs up the stairs swinging an axe to hold Rebecca Ferguson off just like Shelley Duval did with Jack Nicholson. Here you can see that Flanagan has rewritten the ending of the film to become the one that King wrote as the ending of The Shining the book where Danny now takes on the Jack role with his struggle with alcoholism restored, his becoming possessed by the hotel and in particular the boiler explosion climax. It works okay, even if it is one that gives Danny a much downbeat fate than the one he received in the book.

Doctor Sleep should not be confused with the earlier film Doctor Sleep (2002) in which a hypnotist finds himself up against an occult cult.