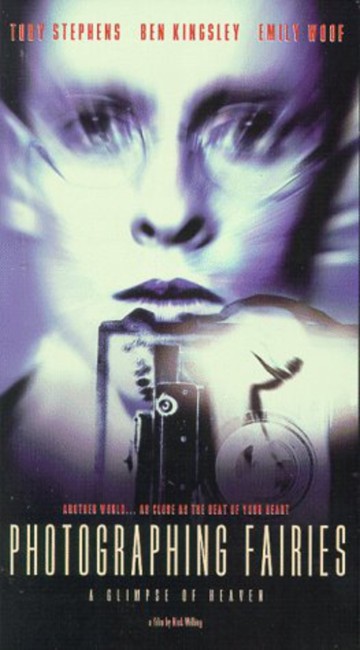 In 1912, photographer Charles Castle returns from Switzerland, grieving over the death of his wife who fell into a glacier while on their honeymoon. He attends a meeting of the Theosophical Society where he voices scepticism over a photo taken by two young girls that supposedly shows fairies. Afterwards, Beatrice Templeton, the mother of the girls, comes to him. Under closer examination, Castle realizes that the photo may not be a hoax after all. He goes to visit the girls and discovers that the eating of a flower found in the nearby woods produces a hyper-realized state, able to be captured on camera, where fairies can become visible. Under the spell of the flowers, Castle sees his wife still alive and becomes obsessed with the idea of the other world that lies beyond the veil of visibility.

One of the most peculiar fads of 1997 was the production of two film based on the 1912 Cottingley Fairies Hoax, with both FairyTale: A True Story (1997) and Photographing Fairies competing on cinema screens. The Cottingley Fairies Hoax was a true-life incident where two young girls with apparently no photographic experience produced pictures of fairies supposedly frolicking in their back garden. The hoax developed considerable notoriety in its day, being championed by the Spiritualist cause and even taking in Arthur Conan Doyle who wrote a book about it with The Coming of the Fairies (1922).

Though they both deal with the same incident, Photographing Fairies and FairyTale are very different films. FairyTale was a straight telling of the story, which showed the fairies as wondrously real and held the view that even if they were not true then at least they should be. By contrast, Photographing Fairies begins by debunking the fairy photos in the first few scenes then reverses its decision and starts to conduct an intriguing scientific exploration into the nature of the phenomenon. Rather than approaching the story with banal, child-like wonderment, it takes a more studied, reasoning approach. Indeed, rather than any fairy story, Photographing Fairies comes much closer to Altered States (1980) and its quest for ultimate understanding of reality via drug experience.

Photographing Fairies was based on a novel by Steve Szilagyi (a first-time novelist who was nominated for a Hugo when the book was published in 1992). Peculiarly though, while Photographing Fairies remains a more resolutely realistic treatment of the two films, it is less concerned with the factual details of the case than FairyTale was. The girls, for instance, are only minor supporting rather than central characters and have been given different names to the historical characters (presumably because Photographing Fairies takes some liberties with them, including killing the mother off and turning the father into a would-be murderer). Although elsewhere, the film uses simulacra of the fairy photos and also keeps a supporting appearance from Arthur Conan Doyle, as played by Edward Hardwicke (who, in an interesting trivia note, also played Doyle’s creation of the eternal companion Dr Watson in Granada’s The Return –, Casebook – and Memoirs of Sherlock Holmes tv series’ between 1986 and 1995).

What is absorbing about Photographing Fairies is its fascinating play of ideas, one where the issue of the fairies soon blossoms out into the remarkable concept of a drug that speeds up perception, allowing the viewing of a world that exists alongside this one where fairies are conduits into the afterlife. The scene where Toby Stephens first takes the flower and everything around him suddenly bursts into slow motion with a buzzing insect stilled before his face, fairies glowing around him and then a vision of making love to his dead wife who wakes from the bed beside him to tell him “This is not a dream” is remarkable. Later visions of the fairies circling the tree, emerging from people’s mouths, and the genuinely upsetting image of them going down in flames as Ben Kingsley throws the fairy traps on the fire, are equally startling.

Director Nick Willing subsequently became a promising genre contributor. He went onto direct the occult thriller Doctor Sleep/Close Your Eyes/Hypnosis (2002), the thriller The River King (2005), the horror film Altar (2014) and tv mini-series such as Alice in Wonderland (1999), Jason and the Argonauts (2000), Tin Man (2007), Alice (2009) and Neverland (2011). Willing also conceived/produced the tv mini-series The Infinite Worlds of H.G. Wells (2001).

(Winner in this site’s Top 10 Films of 1997 list. Nominee for Best Director (Nick Willing), Best Adapted Screenplay and Best Cinematography at this site’s Best of 1997 Awards).