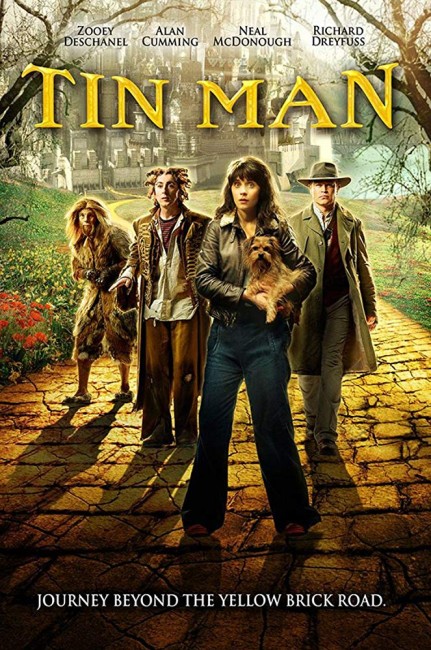 DG lives on a farm in rural Kansas with her parents and works as a waitress. In The OZ (Outer Zone), the witch Azkadellia who rules the lands receives a vision that trouble is coming and despatches her Longcoat guards to Kansas to eliminate DG. DG’s parents help her escape as The Longcoats arrive in a travelling storm. The storm transports DG to the bewildering land of The OZ. She falls into the company of several others:- Glitch, someone whose brain has been partially removed leaving him with memory blanks; Cain, a Tin Man, one of the law enforcement officers from Central City, whom they rescue from where he is trapped inside a metal coffin; Raw, a lion man; and later DG’s childhood tutor who can shape-change into a dog. They head to Central City in the hope of meeting the Mystic Man who has great arcane knowledge. All the time, Azkadellia sends her Longcoats and rat monkeys after them. The Mystic Man helps DG realise that she was born in The OZ and gives her clues to find her real mother who has been imprisoned by Azkadellia. As DG follows the forgotten memories of her childhood on a quest, she realises that she and Azkadellia are sisters and learns how Azkadellia was possessed by an evil force that DG uncovered. Azkadellia pursues, wanting to obtain the all-powerful emerald hidden by their mother, which is capable of either turning The OZ into permanent night or being a force for good.

Tin Man is a tv mini-series that was originally screened in three two-hour parts. It was produced by RHI Entertainment, the production company of Robert Halmi Sr and Jr who were also behind Hallmark Entertainment, which produced a number of genre films and mini-series for television. Tin Man is directed by Nick Willing, a genre regular who has produced a number of works for Hallmark such as the mini-series adaptations of Alice in Wonderland (1999), Jason and the Argonauts (2000), as well as conceived and produced The Infinite Worlds of H.G. Wells (2001), and elsewhere original films like Photographing Fairies (1997), Doctor Sleep/Close Your Eyes/Hypnosis (2002), The River King (2005) and Altar (2014).

Rather fascinatingly, Tin Man is a modernisation of The Wizard of Oz (1939) and to a lesser extent the original L. Frank Baum novel The Wonderful Wizard of Oz (1900). The original has now been reconceived as something that falls between Steampunk science-fiction and an epic fantasy adventure. Soon into the mini-series and one’s head is spinning at the number of interpolations offered up on the familiar.

The mini-series opens in Kansas – we notice that Uncle Henry and Auntie Em have now become Dorothy’s parents, while she is upped a few years into her early-mid twenties and is working a nowhere job as a waitress. Not long in and the tornado arrives – but this is now a storm that allows The Wicked Witch’s stormtroopers to move between worlds. Dorothy is whisked away and transported to Oz but the house remains behind and of course does not land on and kill any Wicked Witch of the East. There are also now no magic red slippers.

Thereafter, Dorothy encounters the Munchkins (who here have been digitally miniaturised rather than played by little people) who are decidedly less friendly than their counterparts in the original, including making Dorothy and the Scarecrow prisoner. Zooey Deschanel’s Dorothy is now shortened to just DG, although a holographic simulation of her original counterpart, now known as The Grey Gale and perfectly outfitted as Judy Garland in red slippers, is seen later in the show.

We get some fascinating counterparts of the original travelling companions. The Scarecrow, Tin Man and Cowardly Lion (even though they are never actually referred to as such) are made much more human than their original counterparts, while their search for virtues (courage, heart and brains) has been dropped altogether. The Scarecrow (Alan Cumming) is an ordinary human but has had part of his brain removed for use by the Wicked Witch, leaving him with memory glitches and a big zipper across the top of his scalp. The Tin Man (Neal McDonough) is found imprisoned inside a metal sarcophagus where he has been forced to watch a holographic simulation of his family being killed replayed over and over for years. (We learn that Tin Man is a nickname given to the law enforcement officers of Central City). The Cowardly Lion is reasonably similar to his original counterpart.

Even more radical interpretations are offered up of some of the other supporting characters. Dorothy/DG is revealed to be an orphan who never knew it and in a completely wild move her ‘parents’ are revealed to be androids programmed to guard her. We meet the equivalent of the Wizard of Oz in the form of Richard Dreyfuss’s Mystic Man, however he is not the ruler of the city but an oracular wise man whose mind has been addled by the Wicked Witch’s drugs. Now there is no revelation that he is a sham who uses bogus magic, nor does he depart by balloon but is instead killed off by the Wicked Witch. Toto does eventually show up but he is now a shape-changer who moves back and forward between human and canine form where it is revealed that he was originally Dorothy’s teacher and the name ‘Toto’ was her child-like attempt to pronounce tutor.

Dorothy turns out to be a princess of Oz – an aspect taken from the silent film adaptation Wizard of Oz (1925) – and The Wicked Witch is revealed to be her sister. The Wicked Witch is not wicked per se but is possessed by an evil spirit that Dorothy uncovered as a child. Azkadellia does have a set of Winged Monkeys but these are now a set of tattoos that come to life to do her bidding. There is no Glinda the Good, although Dorothy’s mother, only referred to as Lavender Eyes on the credits, semi-fulfils this role.

The interpolations and twists put on the familiar tale are never less than interesting. The mini-series comes with a fascinating design scheme. The Witch comes surrounded by appealingly antiquarian, quasi-Steampunk machinery – all grimy boiler rooms, ornate metalwork and hissing steam, even a town of rundown cyborg creatures, but also mixed with magical devices. There is no Emerald City but Central City looks like a combination of 1930s Shanghai and the Yoshiwara nightclub sequences out of Metropolis (1927) – all transplanted into an alternate universe. The result creates a magic world that is almost familiar but has a unique originality that is neither fantasy nor science-fiction cliche.

The last half of the mini-series becomes much more of a standard fantasy adventure quest with Dorothy and companions travelling through the various lands to find an artifact of mystical power. Naturally, as with these types of stories, this is a relic of world-shattering importance – an emerald that, shades of The Dark Crystal (1982), can influence planetary alignments and cast the world into either good or darkness. These sections also have much less of a similarity to the L. Frank Baum book and 1939 film than the earlier sections.

Most of the cast are fine in their roles, none vastly standout. The one performance that tends to let the show down is Zooey Deschanel who plays Dorothy as a tomboyish teen kid who goes through the entire mini-series with her eyes wide open in a blank goggle-eyed stare. Deschanel who has given fine performances elsewhere – the same year’s Bridge to Terabithia (2007), for one – never seems to have any other mode than that, something that might have seemed appropriate for Judy Garland’s interpretation but here turns Dorothy into a simple-minded teen girl.

Nick Willing and the same producers next went onto make Alice (2009), which attempts to do exactly the same thing in giving an alternate world science-fiction interpretation to Lewis Carroll’s Alice in Wonderland (1865) and Neverland (2011), which adapted Peter Pan (1904).