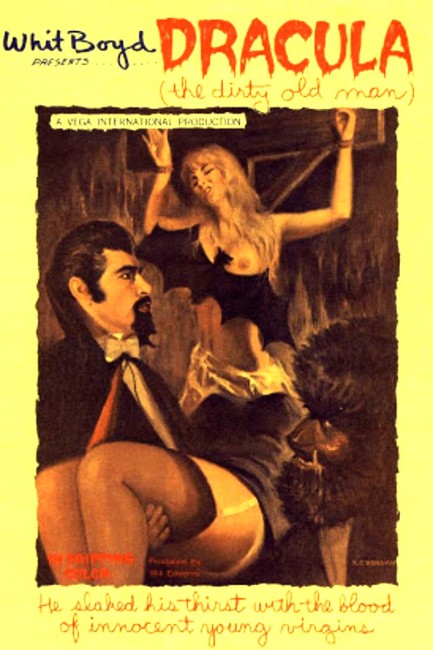 Reporter Mike Waters is sent out to cover the announced reopening of an old mine. The mine is occupied by Count Alucard, which is Dracula spelt backwards. Dracula places Mike under his control, transforming him into a werewolf and giving him a new name Irving Jackalman. Jackalman is then sent out to procure women for Dracula with the promise that Jackalman can have his way with them after Dracula has drunken his fill.

Dracula (The Dirty Old Man) is an obscure entry in the 1960s vampire movie fad. The film was shot around the Las Vegas area. Apparently, after shooting, the sound quality of the footage was deemed so bad that most of the film had to be redubbed. It is this redubbing (with a comedy emphasis) that had led to the film’s bad movie reputation.

Debates rage as to who is the worst screen Dracula. (See Dracula Films). The popular favourite is usually regarded as Zandor Vorkov in Dracula vs Frankenstein (1971). I would throw Andrew Bryniarski from Bram Stoker’s Dracula’s Guest (2008) into the ring as well. And then there is Vince Kelly from Dracula (The Dirty Old Man). To be scrupulously fair, Kelly’s performance in itself may not actually be bad but with the original soundtrack lost it is impossible to tell.

What kills Kelly’s performance is the fact that someone has dubbed him with a comedy voice – moreover, one that sounds less a European accent than a cliche Jewish accent. All of his dialogue is excruciating one-liners. Upon waking up from his coffin, he is cracking lines like “Boy, I have got to go to the bathroom … I need a new interior decorator (after looking around at the cave) … Here comes Mother – the old bat (as a fake-looking bat flaps into the cave).”

Even amidst this, there is still plenty of opportunity for excruciating dubbed witticisms – Dracula joking about having lost his contact lens as he examines a woman’s body in closeup. Or the woman who asks “Are you married or anything?” while in the process of being ravaged by the werewolf. The show is otherwise shabbily made. The werewolf makeup looks pitiful.

Dracula (The Dirty Old Man) was the only film directed by William Edwards. Edwards did however write and produce two other films in a similar vein with Ride a Wild Stud (1969) and The Mummy and the Curse of the Jackals (1969).