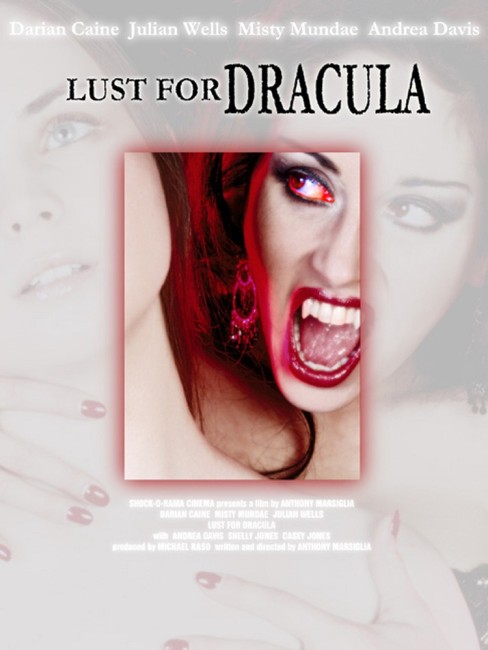 Beth awakens as a newborn vampire. She is taken under the wing of Sara where the two become lovers. Elsewhere, Mina Harker longs to have a baby but is ignored by her husband Jonathan. Dracula, a female vampire, then appears beside her apartment pool and seduces Mina.

The film’s take on Bram Stoker’s Dracula (1897) is odd to say the least. Here Dracula is a woman (Darian Caine), as also is Jonathan Harker and Van Helsing. Beyond the names of the characters, there is nothing in the film that intersects with the plot of Stoker except perhaps the scene where Dracula appears and seduces Mina. Darian Caine does get the “children of the night, what music they make” line (which comes from the films rather than Stoker). On the other hand, the characters of Sara (Andrea Davis) and Beth (Casey Jones), a novice who it appears that Sara only convinced is a vampire for reasons unclear, have no equivalent in Stoker unless at a major stretch you think of the vampire brides.

Perhaps the most bizarre part of the all-girl casting is that we have a girl playing Jonathan Harker. This is a character that is meant to be a male – Julian Wells (a female actress) wears a suit and is seen shaving in the morning. He/she is married to Mina (Misty Mundae) who seems to regard him as a male, despite the fact there are scenes where Wells is walking around nude and clearly is a woman. Later in the film, Misty tears off Julian’s top and is shocked to find what she thought was a man is a woman. This is followed by a bizarre scene where Julian forces himself on her, which is followed by several minutes of scenes where Wells pretends to hump Misty.

The film was apparently shot in five days where Marsiglia threw out the previous script and rewrote scenes fairly much as he was shooting, The result is a little too freeform for my liking. Even in the reduced arena of the softcore erotic film, Marsiglia doesn’t pay enough attention to small matters like plot or even explaining why things are happening. Perhaps the most ridiculous scene in the film is one with Misty Mundae, for all the world seeming like a leftover Flower Child who is out with the space cadets, rocks an empty baby’s crib while singing a made-up rhyme about bats.