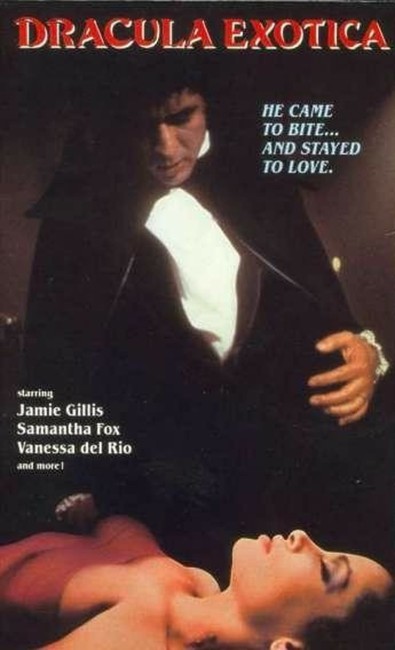 The aristocrat Leopold Michael George Count Dracula is prevented from marrying his beloved, the groundsman’s daughter Surka, because of class differences, and she is sent off to a convent. A hurt Dracula throws himself into orgies. In the midst of one of these, he drags Surka from her prayers and forces his way with her. Disgusted at what he has done afterwards, Dracula begs that God reject him from all salvation and is made a vampire. In the present day, Dracula returns to life. Finding that Castle Dracula has become a tourist attraction, he begs the Communist government for a passport and travels to the USA. Setting up an audition ostensibly to recruit girls for a European tour, he comes across Sally Iancu and believes her to be the reincarnation of his beloved Surka. However, she has been sent to spy on him by US agents.

Dracula Exotica is not an X-rated version of Bram Stoker’s Dracula (1897) or a remake any of the film adaptations as some people have insisted. If anything, it reads more like a straight version of the then-recent comedy Love at First Bite (1979), which had a revived Dracula forced to vacate his castle by now-Communist Romania and travelling to present-day New York City with his manservant where he woos the woman who is a reincarnation of his love. Some of the shots of Dracula’s resurrection and images of him in frilly high-collar shirt seem readily borrowed from the then-recent remake of Dracula (1979) starring Frank Langella.

There is an undeniable sense of humour lurking in the background – like when Jamie Gillis meets Vanessa del Rio and in the midst of going down on her stops to ask “Can you type? … How many words a minute?” – or scenes with him transforming into a bat only to crash into a glass window. The cutest part is the ending where Dracula finally has sex with his reincarnated love Samantha Fox and afterwards the two of them are transformed into ‘pigeons of peace’ and fly away across the city.