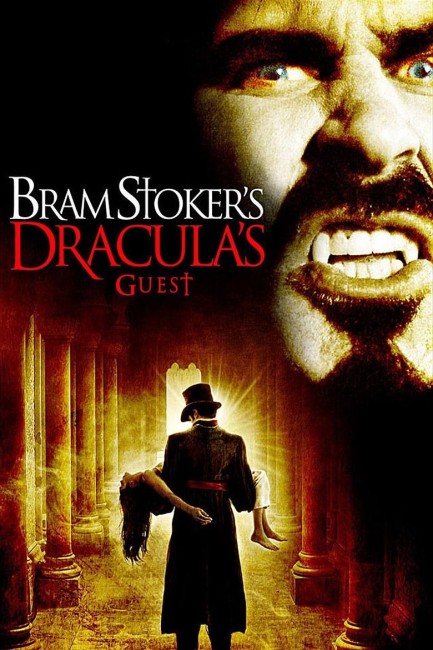 In London, young apprentice lawyer Bram Stoker is asked to help find a property for Count Dracula of Transylvania to purchase. Meanwhile, Admiral Murray, the father of Bram’s beloved Elizabeth, disapproves of their relationship. He tells Bram he must go away and not contact Elizabeth for one year to see if their love is as strong after that time. In upset, Elizabeth runs away and is found by Dracula who whisks her to his castle in Transylvania where he makes her his prisoner. Bram sets out across Europe to rescue her. Dracula informs Elizabeth that he intends to avenge a longstanding feud with her father by impregnating her.

Dracula’s Guest was the eleventh film of low-budget director Michael Feifer. Feifer first appeared on this site’s radar as a specialist of sorts in serial killer biopics with the likes of Chicago Massacre: Richard Speck (2007), Ed Gein: The Butcher of Plainfield (2007), Boston Strangler: The Untold Story (2008), B.T.K. (2008), Bundy: An American Icon (2009) and Drifter: Henry Lee Lucas (2009). All of these can be noted for an extremely liberal treatment of the facts of their respective cases. Feifer has also directed a handful of low-budget non-serial killer horror films with A Dead Calling (2005), Lethal Eviction (2005), The Graveyard (2006) and Grim Reaper (2007). From the 2010s, Feifer has left the horror genre and now churns out a series of excruciating family films and tv movies.

Dracula’s Guest is nominally based on – or one should say shares its title with – Dracula’s Guest (1914), a single chapter story fragment that was published after Stoker’s death by his widow in the collection Dracula’s Guest and Other Weird Stories (1914). In the story, an unnamed Englishman travelling to visit Dracula is forced to seek shelter in a crypt on Walpurgis Night where he witnesses a woman asleep on a bier and is menaced by a large wolf before it is driven away by the arrival of soldiery. It is believed that this was the original first chapter of Dracula (1897) and was cut at the publisher’s insistence in order to bring the length of the book down and that the unnamed narrator is Jonathan Harker on his journey to Castle Dracula.

The film bears very little resemblance to Bram Stoker’s Dracula’s Guest. There is a brief section in the middle that follows the scenes in the story where the narrator is abandoned on Walpurgis Nacht by the German coachdriver Johann and makes his way to a sinister village. And that is about it. Instead, Michael Feifer has made up his own story that works in aspects taken from the Dracula novel – Wes Ramsey’s Bram Stoker essentially has the role of Jonathan Harker and is a junior lawyer who is given the assignment of finding a property for Dracula, while the main body of the film vaguely follows the path of the latter chapters of Dracula in a race across Europe as Dracula heads back to Transylvania with Harker’s abducted fiancee.

The film also makes a confusing attempt to turn Bram Stoker into the central character – an idea you are surprised nobody has conducted before. This makes Dracula’s Guest into another film that attempts to transplant an author into a story similar to their own work – see the likes of Agatha (1979), Time After Time (1979), Hammett (1983), Kafka (1991), The Brothers Grimm (2005), The Raven (2012), In the Heart of the Sea (2015) or the tv series’ The Secret Adventures of Jules Verne (2000) and Murder Rooms (2000-1) – with the suggestion that their adventure is what inspired them to write their most famous work(s). Even then, Feifer seems to have done astonishingly little research into Bram Stoker’s life, having Stoker as a lawyer when Stoker was a theatrical critic and then theatre manager before becoming an author. Indeed, about the only fact about Stoker that Feifer gets right is having Stoker as an Irishman.

Dracula’s Guest is a shabby work on all accounts. Michael Feifer films everything in a flat shot-on-video style that fails to evoke the Victorian period with any conviction. Moreover, the period setting is all over the place – the film has electric lights, which would mean the very end of the 19th Century, but also French people who were present at The Bastille, which was demolished at the very start of the 19th Century. All of the cast affect incredibly unconvincing British accents – most notably Kelsey McCann and especially Dan Speaker as her father – the reason for this being that the film was shot in Los Angeles and all of the actors are American. The sole name who stands out is Wes Ramsey who actually delivers Stoker with a serviceable Irish accent. Even worse is when we visit the French village where the scenes with the peasants in the inn come out as unintentional comedy.

The worst part about the film though is the casting of Dracula. Feifer casts the part with a former bodybuilder, the 6’5″ Andrew Bryniarski who is known for a number of parts playing heavies and hulking psychos including that of Leatherface in The Texas Chainsaw Massacre (2003) and The Texas Chainsaw Massacre: The Beginning (2006). Bryniarski gives us a big and hulking Dracula with a beefy round face and thick goatee where, dressed in Victorian finery, he looks more like the bouncer for a Goth nightclub or the lead singer for a pretentious heavy metal band than Stoker’s iconic Count. The funniest scenes in the film are when Wes Ramsey fights Bryniarski’s Dracula and goes into histrionics threatening what he will do to him, while Bryniarski stands by laughing maniacally and tossing Ramsey around. It is a scene that comes across as utterly preposterous in every regard. Dracula also gets one of the lamest death scenes on record since the death via hawthorn bush in The Satanic Rites of Dracula (1973) – namely being despatched by no more than a sword stabbed into his stomach.

Although there are a great many contenders, this is quite possibly one of the very worst Dracula films ever made. Michael Feifer’s attitude toward Stoker and Dracula is about as adherent to the source material and his cinematic forebears as his serial killer films were to the facts. It is hard to think that Feifer could have made a Dracula film that is so tone deaf to everything that has gone before in the genre and somehow think he would not be ridiculed by fans.