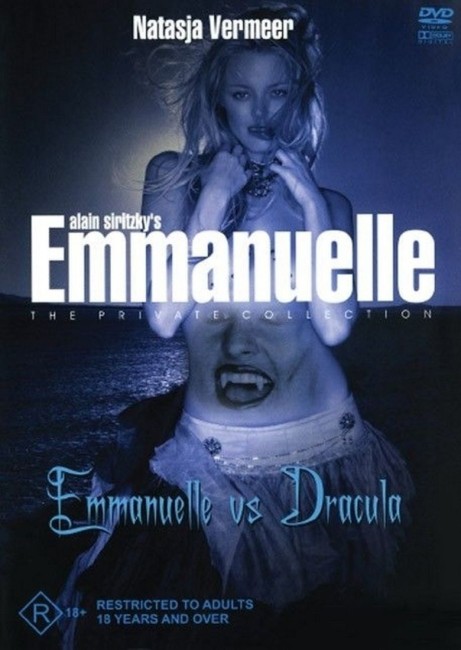 Emmanuelle is attending a bachelorette party for one of her friends. They are expecting a stripper but the knock at the door turns out to be Robertson whose car has broken down. Robertson is invited to join them but turns out to be a vampire. He places a hypnotic spell on them that causes the girls to become sexually aroused. Emmanuelle finds herself fighting against the girls and then the male strippers as they are turned into vampires. Emmanuelle realises that Dracula ha come to claim her.

The film version of Emmanuelle was a hit around the world, giving international fame to Sylvia Kristel in the title role, and was one of the first major softcore films to be released by an American studio. It led to a large number of spinoffs. There were six official Emmanuelle sequels, three of them starring Sylvia Kristel. There were also a good many unofficial films using the Emmanuelle name and other works of Euro erotica that were passed off as Emmanuelle films in English-dubbed release, even a British spoof Carry On Emmanuelle (1978). There are over seventy films bearing the Emmanuelle name.

Emmanuelle the Private Collection: Emmanuelle vs Dracula is not much of a work either of erotica or of vampire cinema. It was made for the cable tv market during the early 2000s and so is all light softcore tumblings – bare boobs, minor flashes of female pubic areas and the briefest labial glimpse, no male genitalia and no penetration shots. Everything is shot soft-focused and gauzy. To suggest a dark element, the camera occasionally cuts away to exterior shots of a castle or suits of armour.

For that matter, Emmanuelle vs Dracula has very little to do with Dracula either. There is no real plot to any of the happenings – a group of woman gather for a bachelorette party and are visited by a vampire (Ernesto Perdomo) who proceeds to put them under a hypnotic spell that brings out their repressed sexuality. Much girl-on-girl tumbling ensues and then assorted guy-on-girl scenes as the male strippers turn up and are promptly vampirised. There is the odd bite at the neck but no blood drinking. The end has a twist that reveals the person we thought was the lead vampire in fact wasn’t. The one amusement is when Emmanuelle fights back and wields a crucifix made up of kitchen knives taped together.

Dutch model Natasja Vermeer is not much of an actress. She is expectedly beautiful but radiates little presence, while her delivery of lines is flat as though she were reciting them phonetically. Interestingly here, Emmanuelle’s libidinous activities are inflated to the point where they almost seem like superpowers. Dracula has come seeking her because of her legendary ability and the dramatic climax of the film is the two of them having a showdown in bed.