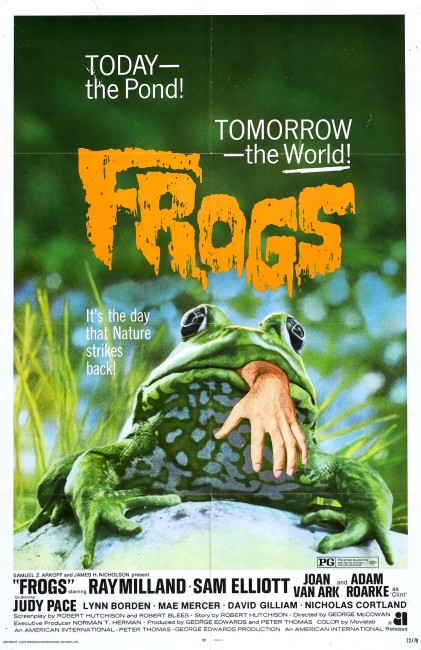 The family of aging millionaire Jason Crockett gather to celebrate his birthday party on his private island in the middle of a lake. While speedboating on the lake, they accidentally run down ecological photographer Pickett Smith. They insist that Smith come back to the house with them. There Smith becomes drawn into the family bickering. As the party continues, various family members and servants start to turn up dead as frogs, snakes and the local fauna all seem to be conspiring together to kill them.

Frogs was a modest hit when it came out. It jumped on the success of the Animals Attack theme popularised by the surprise hit of Willard (1971) the previous year and to gain its peak a couple of years later with Jaws (1975). Although, rather than Willard, Frogs more draws its inspiration from Alfred Hitchcock’s The Birds (1963). Indeed, Frogs uses many elements from The Birds to set in place the formula that was copied by many subsequent entries in the Nature’s Revenge cycle – the group at siege from nature in an isolated setting; flora and fauna on the rampage; no explanation offered for what is happening or else it being tied to humanity’s exploitation of nature; and the downbeat ending with Nature triumphant and seen as humanity’s natural successor.

When Frogs came out, it had some critics reaching for their superlatives to compare George McCowan’s directing debut with that of George Romero in Night of the Living Dead (1968). This was almost certainly overstating the case, especially in terms of McCowan’s subsequent films (see below). There is the odd effective moment. Most of this rests in Mario Tosi’s sparkling natural photography – all light shimmering off water, shafting down through trees – and the excellent animal scenes.

However, the script leaves too much to be desired. Proceedings are too episodic, only centring around the interminable dispatches of the victims who are so one-dimensionally crafted they are frequently difficult to tell one from another. The film seems to have no purpose other than to set them and the animals up to kill them off. Ray Milland’s patriarch starts out interestingly as the only one who seems to have any control of the situation but degenerates into simply being a stubborn old idiot, which is pointless as he is never given any reason for so obsessively wanting to stay on the island and is painted far too cynical to do so for purely sentimental reasons.

Canadian director George McCowan went onto direct a couple of other dreary genre entries – Shadow of the Hawk (1976) about duelling Native American sorcerers and The Shape of Things to Come (1979), one of the worst films seeking to exploit the late 1970s science-fiction boom, as well as the earlier tv movie The Love War (1970) about aliens warring on Earth. He spent most of his career working in US television.