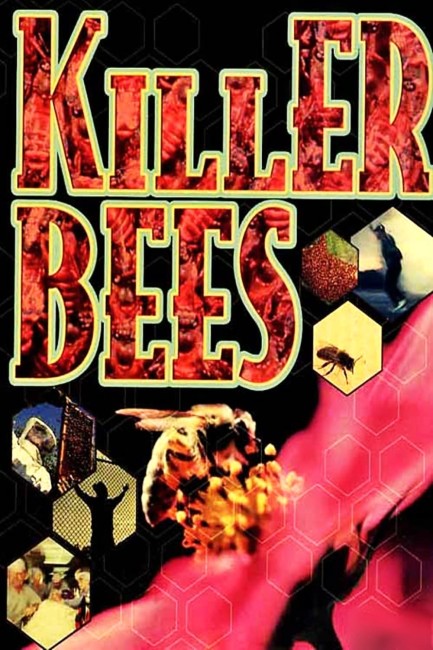 Victoria Wells has persuaded her boyfriend Edward Von Bohlen to go back and visit the family from which he has estranged himself. They travel from San Francisco back to the small California town of Von Bohlen that Edward’s family founded. They arrive at the estate and family winery, presided over by Edward’s grandmother, the strong-willed matriarch Maria whom everyone calls Madame. Victoria is afforded a cool welcome by the other family members. As she becomes caught up in the family power games, Victoria realises that the African bees that the family use to tend the winery are killing people. Though the members of the family ridicule the notion, Victoria discovers that they are covering up the bee deaths.

Curtis Harrington became a director of some modest genre acclaim during the 1960s/70s. Harrington began with the low-budget mermaid film Night Tide (1961) and then graduated to become a member of the Roger Corman stock company, directing re-edited Russian science-fiction films with Voyage to the Prehistoric Planet (1965) and Queen of Blood (1966). Harrington then had a hit with the psycho-thriller Games (1967) and went onto a string of films in the Batty Old Dames genre with How Awful About Allan (1970), What’s the Matter with Helen (1971), Whoever Slew Auntie Roo? (1972) and The Killing Kind (1973). Harrington’s fad for Batty Old Dames films faded within a matter of years and soon he was making ends meet by churning out tv movies such as The Cat Creature (1973), Killer Bees here, The Dead Don’t Die (1975) and Devil Dog: Hound of Hell (1978), with only one return to theatrical release with Ruby (1977), followed by a decade’s work as a tv director for hire before his death in 2007.

Killer Bees came out in the mid-1970s fad for Animal/Nature’s Revenge films that had been started by Alfred Hitchcock’s The Birds (1963) and continued with hits such as Willard (1971) and Frogs (1972), culminating in the massive success of Steven Spielberg’s Jaws (1975). I have commented elsewhere that there has never been any such thing as a good killer bee movie. You can look to embarrassing examples like The Deadly Bees (1967), the passable but frequently ridiculed Invasion of the Bee Girls (1972), which gets excused from blanket condemnation because its killer bees are actually human women, The Savage Bees (tv movie, 1976), The Bees (1978), Irwin Allen’s The Swarm (1978), which for many years was considered one of the worst films of all time, Terror Out of the Skies (tv movie, 1978), Deadly Invasion: The Killer Bee Nightmare (tv movie, 1995) and Killer Bees (2002). The presence of killer bees were even cited as one of the prime reasons that the remake of The Wicker Man (2006) was laughed off the screen. The CGI effects film has revamped many classic monster movies but so far nobody has attempted a CGI killer bee film, which may well say something about how far degenerated the killer bee film is as a genre.

Killer Bees proves to be no exception to this dictum about the killer bee film. This becomes evident from the opening scene where a man ventures into a field and is attacked by a swarm of bees, which get into his car as he flees, causing him to crash. The inherent absurdity of the scene is not helped by the extremely cheap looking bee effects that look exactly like a horde of buzzing black specks have been optically superimposed over the frame. There is no depth to the swarm so that each attack looks like all the bees are massed in the foreground directly in front of the camera.

You get the feeling that Curtis Harrington has been handed an assignment to make a Nature’s Revenge film and simply went away and copied The Birds, albeit substituting bees for birds, and otherwise made one of his regular films. In fact, what we have feels more like another variant on one of Curtis Harrington’s Batty Old Dames psycho-thrillers. The film mimics the plot structure of The Birds – outsider woman joins a man she is interested in on a journey back to his home but comes up against his controlling mother; massed attack by nature echoes on a macrocosmic level the ructions that her presence causes within the family. Being Harrington, he chooses to focus much of the film on the fierce matriarch played by Gloria Swanson (through a thick European accent), a Hollywood beauty of the silent era in what was her penultimate role, creating another Batty Old Dames film of sorts. There are also a few echoes of the very first Nature’s Revenge film The Naked Jungle (1954) in the underlying theme of nature coming to take revenge against a proud landowner for their hubris in thinking that they can tame the environment.

The other complaint about Killer Bees is that after introducing its killer bees in the first scene it slows right down and slips into terminal dullsville. After the opening scene, it is more than half the film before we get another killer bee attack and that is about it for the rest of the film. The interim is spent circling around the not terribly interesting dramas concerning Edward Albert and his unwillingness to return to the family, their polite resentment of the presence of Kate Jackson in the household and so on, which seems to involve a lot of talk about not very much happening at all. It makes for one of the dullest of all 1970s Nature’s Revenge films.

The script does perk up mildly when it comes to the unusual ending. [PLOT SPOILERS]. Here the film plays against the grain of the genre where you would expect that everything would end in an apocalyptic siege with people fighting off the attacking bee swarms. Only that never happens. Instead we get a very peculiar scene where Kate Jackson returns to the homestead after the funeral, enters the attic to find bees swarming there, goes in to commune with them and then in the epilogue returns acting mysterious but now accepted by the other members of the household who take to referring to her as Madame as they did Gloria Swanson. Here you get the implication that the bees and humans exist in a peculiar symbiosis that regarded Gloria Swanson as their queen bee and that Kate Jackson has now inherited the role.

The film features Kate Jackson, several years before becoming a superstar with Charlie’s Angels (1976-81). During this period, Jackson seemed to have a budding career as a tv horror starlet with appearances in the tv series Dark Shadows (1966-70) and tv movies such as Satan’s School for Girls (1973) and Death Cruise (1975). The script comes from husband and wife John William and Joyce Hooper Corrington who also wrote several films during this era, most notably The Omega Man (1971) and Battle for the Planet of the Apes (1973). One of the most interesting credits is that of Joel Schumacher listed as production designer, who later became one of Hollywood’s worst directors with the likes of The Lost Boys (1987), Flatliners (1990), Batman Forever (1995), the notorious Batman & Robin (1997) and The Phantom of the Opera (2004).