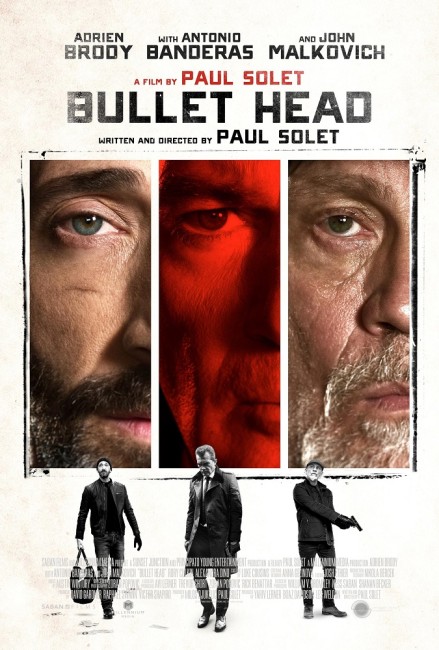 Stacy, Walker and Gage flee from a safecracking that has gone wrong, pursued by police. The operation went off-track because the drug-addicted Gage decided to detour to rob the pharmacy. Their driver crashes in an alleyway, being killed in the process. The other three seek refuge inside the adjoining warehouse. Inside they discover they are trapped with a maddened killer dog, leftover from a series of illegal underground dogfights.

Paul Solet is a director I wish would get more opportunities to make films. Solet is a not director that many people are likely to recognise but made a standout debut feature with Grace (2009) about a woman who gives birth to a dead baby and insists on keeping it. Since then Solet has not quite followed up on that promise, having made the ghost story Dark Summer (2015) and the non-genre Clean (2020), as well as the The Weak and the Wicked episode of Tales of Halloween (2015).

Here Solet makes a film for Millennium Films and Saban Films. Millennium, a company formed by several former Cannon Films associates, seems to have a business model based on acquiring previously successful properties and creating more sequels as with Conan the Barbarian (2011), Hellboy (2019) and the various Texas Chainsaw and Rambo sequels, among other. Saban Films is a successor company to Saban Entertainment that made a great deal of children’s film and tv in the 1990s

The film takes place in a vast warehouse that seems more spacious and filled with nooks and crannies than any warehouse that would ever exist in the real world – I was constantly reminded of the vast sprawling theatrical space that Philip Seymour Hoffman builds in Synecdoche, New York (2008). All of this was shot in Millennium’s preferred filming grounds in Bulgaria. In the midst of this, Paul Solet introduces what the end credits reveal to be a CGI dog. (In what must be a first for a killer dog film, we get flashbacks from the dog’s point-of-view showing it being groomed for the dogfights).

Into the midst of this, we get three criminals on the run from a botched robbery. The film certainly gives us a stellar casting line-up – Adrien Brody and John Malkovich, both Academy Award winning actors, with Rory Culkin as the tweaker and Antonio Banderas as the gang leader behind the dogfights. It seems a promising set-up and a great cast to make it work – even if neither Adrien Brody nor John Malkovich do much to convincingly seem like they are regular working class criminals they are meant to be.

The main problem is where you want Bullet Head to go – a tense, all-out fight to the death between the men trapped in the warehouse and a trained killer dog – it never much does. I was hoping it would end up being something of films like Burning Bright (2010) with people trapped in a house with a tiger or The Pool (2018) with people trapped in an emptied swimming pool with a crocodile. Not to say that Paul Solet doesn’t produce tension – and there are a number of scenes where does so well. The main issue with the film is that the overall pace drags and the tension only picks up within sporadic moments. For some reason, Solet feels that he has to pad the running time out with extended flashbacks where the various criminals explain their backhistories to one another. It is not really needed and these scenes further drag out the expected tension, leaving a film that feels dramatically flat.