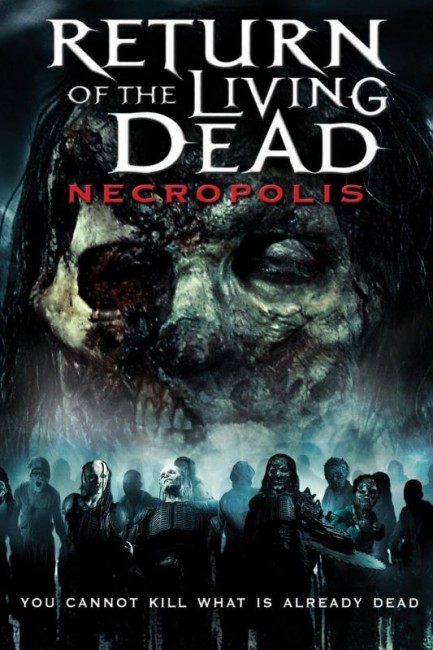 Charles Garrison, a scientist with Hybra Tech, travels to Chernobyl to illicitly obtain several canisters of Trioxin 5 that have been stored inside the reactor facility. Back in the US, Charles’s nephew Julian’s best friend Zeke is rushed to hospital after being injured a motorcycle accident. Going to the hospital, Julian is shocked to be informed that Zeke is dead. However, Zeke’s girlfriend Katie works as a security monitor at the Hybra Tech facility and reports seeing Zeke as he is brought into the medical research centre. Julian and Katie gather their group of friends, arm themselves and plan to break in to the Hybra Tech building to rescue Zeke. There Julian discovers that his uncle Charles has created hordes of zombies and has even resurrected the bodies of Julian’s late parents as zombie killing machines. During their break-in efforts, the zombies are accidentally released and quickly overrun the facility, killing every person they come across in their hunger for brains.

Return of the Living Dead: Necropolis is disappointingly routine on all counts. The zombie makeups look cheap and, while the film is moderately gory, there is nothing we have not seen before. Even though Ellory Elkayem had professional directing credits before, his work seems awkward, amateurish and slapdash. The teenage cast are anonymous – certainly, none of them have ever been heard from again. John Keefe makes for a particularly whiny hero – he protests killing a zombified friend “Man, she’s my friend. I lost my virginity to her,” and later there is the entirely laughable scene where he comes across his parents who have been transformed into cast-off Borg machine warriors and his immediate response is to plead: “Mom, Dad, It’s me Julian.” (There are times you cannot help but think that Dan O’Bannon’s mercilessly black approach to the material would have helped Return of the Living Dead: Necropolis no end). The truth of the matter is that without the Return of the Living Dead pedigree before its name, Necropolis would have attracted zero attention whatsoever.

Mostly, Return of the Living Dead: Necropolis has a routine plot that feels as though it has been quickly strung together to jump aboard the 00s zombie trend. The scheme that the teenagers follow in breaking into the corporate buildings seems particularly hare-brained – they discover that their friend has been taken to the facility and rather than John Keefe go to his uncle who runs the place or the police, they decide to arm themselves and break in via the backdoor; and, as opposed to doing so in a way that is secretive and unobtrusive, they bring guns with them and start randomly shooting at everything that moves – not to mention later arm themselves with an arsenal of semi-automatic weapons that they just happen to find lying around a research facility. (One of the more absurd aspects of the film is how the guns also seem to jam and fail with every second gunshot).

What is particularly irritating is the way that Necropolis keeps unimaginatively throwing in aspects from the original Return of the Living Dead, yet on a wider level misses altogether recapturing Dan O’Bannon’s black comedy treatment. The gag with zombies stumbling around moaning “brains” quickly becomes tiresome due to constant repetition. The film also trots out a repeat of the infected guy turning to the girl “I just want to eat your brains,” a variation on the line of the zombies saying “send more cops” into the radio that here becomes “send more security guards,” while the plot has a similar beginning where a canister of the zombie gas is discovered and then accidentally punctured.

The film claims on the end credits to have shot at the actual Chernobyl reactor. One finds this a little hard to believe as the Ukrainian government has established a twenty-mile exclusion zone around the still radioactive hot site where trespassers are prosecutable by law. Certainly, there have been a number of people squatting inside the area and flourishing illicit tourism operations into the zone but one finds it hard to believe that a US camera crew and known Hollywood actor (Peter Coyote) would willingly flaunt the law and place their health in danger by venturing into a zone flooded in heavy radiation. The Ukrainian government did maintain the surrounding reactors to provide power up until they were closed in the year 2000, however would be technically impossible for anybody to film inside Reactor 4 (the one that underwent the meltdown), as this has now been encased inside a concrete sarcophagus. The rest of the film was shot in Romania and one suspects that the scenes are more likely to be some old industrial plant somewhere there and the rest to be promotional spin.

Director Ellory Elkayem was a New Zealander who made his feature-length debut with the killer insect film They Nest (2000) on the back of a well-received giant bug short film Larger Than Life (1998). This netted him the assignment of the Roland Emmerich produced giant spider film Eight Legged Freaks (2002), his most high profile work to date. After that, Ellory Elkayem appears to have disappeared apart from these two Return of the Living Dead films and the subsequent dvd-released Without a Paddle: Nature’s Calling (2009).