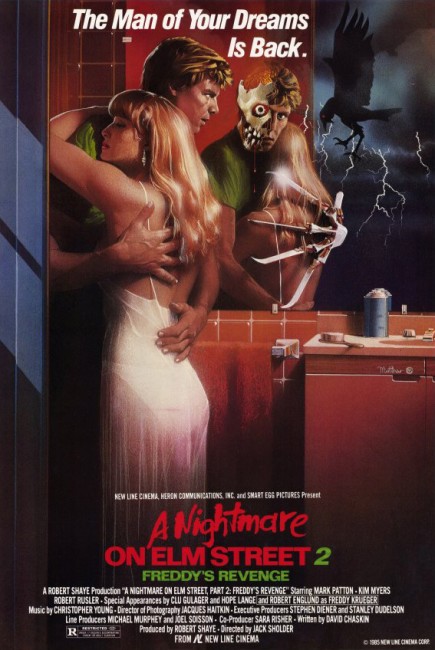 The Walsh family has just moved into the old Thompson house on Elm Street. Teenage son Jesse is troubled by dreams of Freddy Krueger. In the dreams, Freddy tells Jesse that he wants him to do his killing for him. Freddy then begins a new spate of killings, targeting the people around Jesse. All the while, Jesse struggles to stop Freddy taking over and possessing his body.

A Nightmare on Elm Street Part II: Freddy’s Revenge was the first of the Elm Street sequels and was even more successful in its theatrical run in some places than the original film had been. With Freddy’s Revenge, Freddy Krueger took a major step towards securing the niche as horror cinema’s reigning boogey man that had been previously held by Jason Voorhees, whose popularity was starting to burn out. (Which certainly did not seem a bad thing because the A Nightmare on Elm Street films, which had a dream-like surrealism as their focus, had the potential to make for a far more imaginative series than the Friday the 13th films ever did).

However, A Nightmare on Elm Street Part II: Freddy’s Revenge is an astoundingly silly entry. It is the A Nightmare on Elm Street series’ equivalent of Exorcist II: The Heretic (1977). There is an imaginative opening that has a school bus commandeered by Freddy driving off into the desert and being left precariously teetering on twin pinnacles of rock above a fiery pit as the ground beneath it caves away.

However, not long in, the film gives in to ludicrous scenes – like where Marshall Bell’s sports coach is dragged away by skipping ropes, or three-foot long tongued French kisses and an hilariously daft scene where a canary flies around a family living room before exploding.

The weirdest part about A Nightmare on Elm Street Part II: Freddy’s Revenge is to how the basic premise of the series has been twisted around to become a gay Coming Out parable. There is a bizarrely out-of-place sequence where the teen hero (Mark Patton who was also a gay actor in real life) encounters his coach in a gay leather bar and they return to the school gym for a bondage session. Now Freddy Krueger is no longer a boogey man seeking revenge but someone trying to possess the hero’s body. Freddy is seen as representative of sadomasochistic gay tendencies – the hero is seen to be literally struggling against this ‘bad’ nature coming out in him. In one leerily symbolic scene, his girlfriend tries to make out with him but he finds himself unable to stop Freddy bursting out of his mid-regions and has to abandon her and rush off and ask his best male friend to watch him while he sleeps!

The script is almost totally detached from narrative logic and makes wholly indiscriminate flips between reality and fantasy – the first film had Freddy as a revenant who lived in dreams, the climax here has him physically emerging into the real world and running around a pool party barbecuing teenagers. One defies anybody to try making rational sense out of the film. The transformation effects with Robert Englund’s head forcing its way out of Mark Patton’s stomach are good – certainly, much more elaborate than they were in the original. Female lead Kim Myers bears an uncanny resemblance to Meryl Streep.

Director Jack Sholder had previously made the slasher black comedy Alone in the Dark (1982) and would next go onto the great body-hopping alien film The Hidden (1987). Sholder subsequently worked in television with tv movies such as the nuclear war film By Dawn’s Early Light (1990), the timeloop film 12:01 (1993), the cloning film Natural Selection/Dark Reflection (1994), the unsold series pilot Generation X (1995) from the superhero comic-book and 12 Days of Terror (2004), a true-life story about a killer shark – and then the direct-to-video horror sequel – Wishmaster 2: Evil Never Dies (1999) and Arachnid (2001). Sholder was also responsible for directing uncredited additional footage on Supernova (2000). Screenwriter David Chaskin later wrote the quite good Elm Street copy I, Madman/Hardcover (1989).