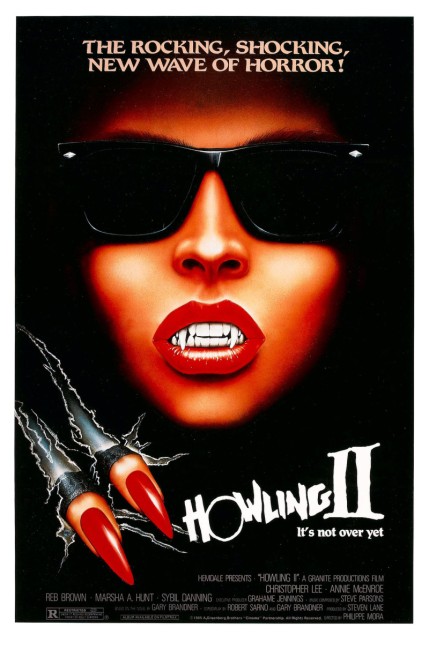 At Karen White’s funeral, her brother Ben meets the mysterious Stefan. Stefan warns Ben and journalist Jenny Templeton that Karen is a werewolf and must be staked with titanium to stop her returning from the dead. Ben thinks Stefan is mad until Stefan makes him stay and watch Karen’s body come back to life before he stakes it. They head to Transylvania to stop a festival where werewolves from all over the world are converging under their centuries-old queen Stirba.

Joe Dante’s The Howling (1981) became a cult classic with its tongue-in-cheek werewolf movie in-jokes and genre quotes and most of all for the amazing central werewolf transformation effects set-piece. The Howling II was the first of a series of entirely terrible sequels (see below for the other titles). The sequel’s connection with the first film is tenuous – the Karen White that is seen here doesn’t even have the same hair colour as Dee Wallace did and the film abandons the lampooning, tongue-in-cheek style of the original and plays itself seriously. Although Gary Brandner, author of the original Howling novel (which was largely abandoned by the first film anyway), does co-write the screenplay.

When it came out, The Howling II developed somewhat of a Plan 9 from Outer Space (1959) reputation. It is directed by Australian Philippe Mora whose work one has admired elsewhere – see The Beast Within (1982), the superhero spoof The Return of Captain Invincible (1983) and parts of the supposedly true alien abduction story Communion (1989) – but who rapidly gained a reputation down the bottom end of the market following his two Howling films.

Mora has a majorly irritating editing style where he strobe flickers back and forward between images within a scene. This reaches a particularly sleazy height over the end credits where one scene of Sybil Danning ripping her top off from earlier in the film is repeated several dozen times. There is also the needless inclusion of a number of scenes with a band that are posing (badly) at being punks. Certainly, the tongue-in-cheek sense of humour of the first Howling film had would have helped no end scenes such as the supposed werewolf menage a trois where the participants sprout hair and start barking!

Part of the problem is the confused, meandering script. This at times it seems to owe more to vampirism than werewolf lore – the need to stake the werewolf to kill them, the sojourn to Transylvania. It is a plot that needed much tighter editing – the script throws in all manner of magic rituals and scenes around the village that have little incident to the main plot.

Often the film seems to have included scenes for the sole reason of highlighting cheap makeup effects – the priest getting an Alien (1979)-like chestbuster forced down his mouth, the dwarf’s exploding eyeballs. Certainly, while the effects were the highlight and talking point of The Howling, here they are cheap and tatty and frequently kept to the shadows presumably so as not to emphasise their shortcomings.

The Howling II does star the perpetually awful Sybil Danning and her very large chest measurements, although she certainly cuts a striking figure in shades, V-neck leather catsuit and hip-length boots lined with strips of mirroring. However, quite what Christopher Lee, who ended up swearing off doing horror movies a decade earlier, is doing mixed up in this is a baffling question. Reb Brown is stolid, while Annie McEnroe proves wimpy.