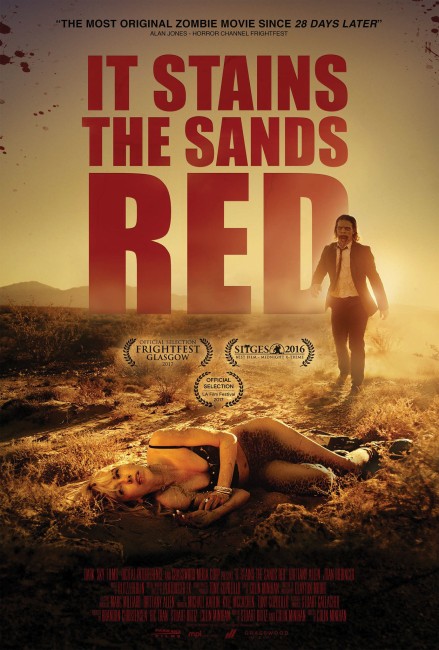 Molly is heading to Las Vegas with her drug dealer boyfriend Nick for a meeting when their car becomes stuck in the sand on the side of the road. They then see a man stumbling towards them and realise that this is a zombie. Unable to drive away, they take refuge in the car only for Nick to be attacked when they emerge, thinking the zombie has gone. Grabbing a handful of supplies, Molly flees into the desert, following the GPS to the airfield where they are supposed to meet Nick’s contact. The zombie stumbles along after her, although she is able to keep ahead of it by maintaining a walking pace. As they travel, a slow relationship grows between her and Small Dick or Smalls as she nicknames the zombie.

Colin Minihan started making films as one half of the Canadian duo known as The Vicious Brothers along with his friend Stuart Ortiz. The two had a moderate success with their Found Footage ghost story Grave Encounters (2011), as well as their writing the sequel Grave Encounters 2 (2012) for a different director. They subsequently went on to make Extraterrestrial (2014), which the IMDB insists that Minihan directed on his own, even though the film itself is credited to The Vicious Brothers. Colin Minihan gets his first solo credit as director with It Stains the Sand Red, although Stuart Ortiz is present as co-writer and one of the producers. Minihan subsequently went on to make the psycho film What Keeps You Alive (2018).

The zombie film has reached to a point of market glut in recent years. The George Romero-inspired zombie film of the 1970s/80s underwent a big revival in the mid-2000s with hits such as Resident Evil (2002), 28 Days Later (2002), the remake of Dawn of the Dead (2004) and Shaun of the Dead (2004). This resulted in a host of mostly low-budget imitators that quickly reached a point of market glut in a short space of time. Following in the more comedic vein taken by Shaun of the Dead, over the next few years we started to get a host of parodies/gonzo conceptual and title mash-ups that ranged all the way from Zombie Strippers! (2008) to Pride and Prejudice and Zombies (2016). This too has started to become a creatively exhausted fad in the last couple of years.

That said, the zombie genre shows no signs of going away. At a point when it almost feels like the genre is becoming creatively exhausted, it is also the point where some filmmakers have started to find unique and very creative interpretations – see the likes of The Girl With All the Gifts (2016), Here Alone (2016), Cargo (2017) and The Cured (2017). Or just ones that deliver a rousing run through of the basics such as Train to Busan (2016).

I started watching It Stains the Sand Red without knowing anything about it. It has one of the most attention grabbing openings of any film I have seen in the last while. Brittany Allen and her boyfriend Merwin Mondesir (who we get the impression is a drug dealer or engaged in some criminal endeavour without anything being stated) are driving to Vegas for a meeting only for his Porsche to stall in the sand when he pulls over to the side of the road. A figure stumbles down the road towards them and it gradually becomes apparent that this is a zombie. Things go hilariously sideways – Merwin shoots at it, only to completely miss every single shot and they are forced to hide inside the car, only for him to realise he has dropped his cellphone out on the road and they have to sit there as the zombie slathers and paws at the window. Eventually, after nightfall, they realise the zombie has gone and emerge to get the phone – only for Merwin to get bitten the moment he steps out of the car.

The film becomes even funnier from there as we watch Brittany Allen stumbling through the desert badly unprepared – her clothing consists of a leopard skin fur coat and platform shoes (one of the things the film leaves you wondering what torture the shoot must have been on the actress who spends the entire film walking through the desert in shoes with six inch soles). You are entirely in love with the show by about the time that she goes to sleep on a rock, has the zombie pawing away below her and reaches into her pants to pull out her tampon and make a getaway by throwing it to distract the zombie.

Thereafter, you realise you are in the midst one of the most original treatments of the zombie film in recent years. There is something quite hilarious to the idea of a film that consists of a girl walking through the desert pursued by a zombie where the entire pursuit takes place at a walking pace. The brilliance of the film comes in watching her develop a relationship of sorts with the zombie, keeping up a running monologue-come-psychodrama during the journey, going on about the men in her life and taunting it for having a small dick and naming it ‘Smalls’. Not to mention when she starts using it to transport her supplies with an inflatable raft dragged by a rope around its neck.

The surprise is how touching this becomes – there is a real sense of emotion generated when she prepares to leave Smalls behind tied to a rock but realises she cannot abandon him, or in the scenes where she tries to protect him from the soldiers. Colin Minihan is not above creating suspense either – there is a wonderfully tense scene where Brittany Allen is hiding inside a bath in an abandoned house as the zombie prowls about on the other side of the shower curtain, only to have a scorpion crawl up her body but be unable to move or brush it away unless she alerts Smalls.

The only negative point about the film is [PLOT SPOILERS] when Smalls is removed from the show twenty minutes before the end and the relationship between he and Brittany, which has formed the emotional backbone of the show, has the brakes abruptly slammed on it. The show thereafter focuses on the far less interesting and well developed plot about Brittany setting out to find her daughter. You cannot help but feel that a film that sought a greater degree of emotional closure would have stayed with her and Smalls.