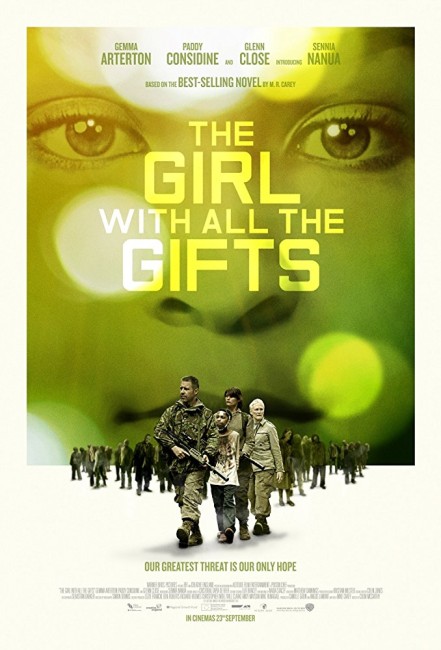 Melanie is one of several children held prisoner at an army base. There are taught daily by teacher Helen Justineau. The soldiers refer to them as Abortions and regard them as dangerous because they have a hunger for human flesh. Melanie is insistent that they are intelligent and not animals. She is then taken for experimentation by scientist Dr Caldwell but this is interrupted as the Hungries, the zombies that have overrun England, burst into the base. Helen, Melanie, Caldwell and several soldiers flee. Sergeant Parks heads towards London, which has been abandoned and is overrun by Hungries. All along the way, Caldwell is certain that Melanie’s body offers an antidote to the virus that drives the Hungries but this requires cutting her up. All but Helen regard Melanie as a dangerous threat and insist she remain muzzled but during the course of the journey, she begins to prove her trust to them.

The zombie film underwent a major resurgence in the 2000s following high-profile successes such as Resident Evil (2002), 28 Days Later (2002), Dawn of the Dead (2004) and Shaun of the Dead (2004). By the end of the decade, the number of low-budget imitators had eventually depleted the genre of all original moves and it was reduced to self-parody in a series of gonzo mash-ups such as Zombie Strippers! (2008), Attack of the Vegan Zombies! (2009), Santa Claus vs. the Zombies (2010), Cockneys vs Zombies (2012), Scouts Guide to the Zombie Apocalypse (2015), Attack of the Lederhosen Zombies (2016) and Pride and Prejudice and Zombies (2016), among others. Amidst this, the serious zombie film has seemed a dying breed.

That said, there have been a number of entries coming out in the last couple of years – Train to Busan (2016), Here Alone (2016), Cargo (2017), It Stains the Sand Red (2016) and The Cured (2017) – that show there are still strong and creative moves still to be found in the zombie film, while the ongoing popularity of tv’s The Walking Dead (2010– ) shows no sign of flagging. Of these, The Girl with All the Gifts enters as one of the most surprising and fiercely original entries in the genre.

The Girl with All the Gifts comes from Scottish-born director Colm McCarthy. McCarthy has a more than reasonable resume working in various British tv shows such as Spooks (2002-11), Doctor Who (2005– ), Sherlock (2010– ) and Ripper Street (2012-6), as well as has currently signed on to direct the pilot for the US-made Superman prequel Krypton (2017– ). McCarthy’s one previous feature film was Outcast (2010), a hugely underrated and fascinating film about folk magic in the present day.

The script comes from Mike Carey, a British novelist who has been known for his work in comic-books including numerous issues of X-Men and Hellblazer, while he was also the creator of the Constantine spinoff Lucifer (2000– ), currently the basis of the popular tv series Lucifer (2015-8). Carey wrote the film based on his novel The Girl with All the Gifts (2014), which in turn was based on his earlier short story Iphigenia in Aulis (2012).

The Girl with All the Gifts comes with a great opening where we see everything through the eyes of young Sennia Nanua. McCarthy makes sharp contrast between the classroom where Gemma Arterton gives lessons, maintaining a caring relationship with the children, reading them stories, and then the soldiers strapping the children into their chairs at gunpoint and derogatorily referring to them as ‘Abortions’, all of which Sennia greets with a cheery smile. The scene where she writes a story about what she would do if she were free and a moved Gemma Arterton almost touches her hair before Paddy Considine’s sergeant intervenes, wipes the gel from his hand and holds it before one child’s face whereupon all of the children in the class erupt into mindlessly snarling animals is startling.

Thereafter, The Girl with All the Gifts heads in the direction of a standard zombie film with the massed hordes beyond the fences all of a sudden overrunning the military base, devouring and converting the soldiers en masse and a small handful of survivors making a flight for freedom. This soon becomes remarkable in its own way – it is a film with a strong arc about the slow opening up of the relationship between the soldiers and scientist of the group who regard Sennia as less than human to one of trust and cooperation.

As George Romero started to show in Day of the Dead (1985) and leaned towards in his second trilogy – Land of the Dead (2005), Survival of the Dead (2009) – the zombie apocalypse has its limitations, what is far more interesting beyond that is the idea of the evolved zombie or the one that rediscovers/remembers vestiges of its humanity. The film reaches one of the most delightful endings that one has seen in a film in some time – something where Mike Carey undeniably draws on the ending of Richard Matheson’s I Am Legend (1954), although delivers it in a wholly unique way.

In numerous sequences – the passage through the zombies milling about in the centre of the city, Melanie’s ingenious method of allowing all of them to escape from the hospital, the luring of Fisayo Akinade by the children – Colm McCarthy demonstrates an immensely assured hand. The images of a devastated and overrun London are delivered with an expert eye and some most impressive effects. Most of all, the show is owned by young Sennia Nanua who gives a wonderfully bright and cheerful performance. She becomes the centre and the heart of the show – in fact, gives an enlivening performance that runs rings around all of the other seasoned pros – Gemma Arterton, Glenn Close and Paddy Considine.