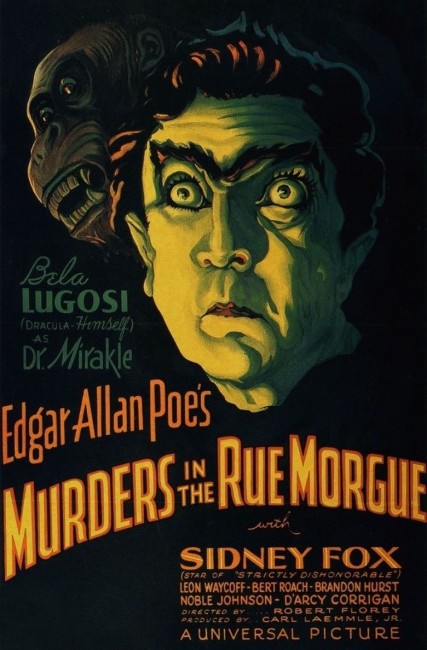 Medical student Pierre Dupin visits the Parisian circus with his love Camille L’Espanaye. There the sinister Dr Mirakle displays his gorilla Erik, insisting that it can talk to him. Unknown to them, Dr Mirakle is abducting women and injecting them with gorilla blood in an attempt to prove his theories about evolution, something that is invariably killing the women. Mirakle then develops an unhealthy fixation with Camille.

Murders in the Rue Morgue was also the first in a mini-spate of Edgar Allan Poe adaptations in the 1930s, which also included The Black Cat (1934) and The Raven (1935), all of which starred Bela Lugosi (and sometimes Boris Karloff). What is distinctive about these is their almost complete lack of anything to do with Edgar Allan Poe, almost nothing except literally the title.

Murders in the Rue Morgue at least has the closest resemblance to the Poe story out of any of these. The 1841 Poe original was a detective story in which Poe’s detective August Dupin (whose methods of observation and logical deduction were later used by Arthur Conan Doyle to create Sherlock Holmes) solved the murder of a woman who was found shoved up a chimney in a locked room, discovering that an ape was responsible. The film keeps the ape but turns the rest into a mad scientist film. To its credit, there is the murder of a woman in a locked room near the end of the film. She is found planted upside down in the chimney, and there is another touch from the story of the witnesses all thinking that the ape was speaking a different language. There endeth resemblances.

Most of all, Murders in the Rue Morgue is a mad scientist film. Of all the mad scientist films of the era, it seems the most primal and Gothic. Like James Whale in Frankenstein, Robert Florey reaches back to German Expressionism and in particular The Cabinet of Dr Caligari (1919). The streets of Paris are designed as a stylised world of arched black-and-white shadows, which gives the film a strikingly ornate look that many later, cheaper mad scientist films lack. The climax with the ape abducting the heroine is even taken straight from Cesare’s abduction of Lil Dagover in The Cabinet of Dr Caligari.

The film was a product of an era where evolution was still only regarded as a wild theory, not as established scientific orthodoxy. Clearly, evolution is a theory that the film regards as highly dubious. Dr Mirakle’s experiments are a barely coherent muddle of ideas to do with injecting gorilla’s blood into women to ‘prove’ his theory of evolution. (Mirakle seems somewhat surprised at the failure of this scheme to work but the problems of tissue typing and blood groups was well known in the day when the film was made, although ironically the injection of gorilla blood would probably not kill somebody, only make them very sick).

More to the point, this is indicative of the 19th Century and Gothic mindset that Murders in the Rue Morgue works on. The experiments are not meant to be serious, they are simply meant to be abominable. One gets a clear indication of how the film intends theories of evolution to be regarded from the moment that Bela Lugosi states his intention to conduct an experiment in ape blood transfusion and the camera closes into ominously underlit closeup on his face.

Lugosi’s Mirakle is as much a venturer into forbidden science as he is someone who crosses societal lines into indecency and crimes against human nature. He has evidently improper intentions upon the heroine, demanding with patent obviousness to know where she lives – then sending his ape to abduct her when he finds out. Not to mention the fact that he clearly courts prostitutes as his victims. It is an apt and accurate pinpointing of how society at the time regarded evolution.

Director Robert Florey made several other ventures into horror and fantasy with The Face Behind the Mask (1941), The Beast with Five Fingers (1946) and Tarzan and the Mermaids (1948). In later years, he directed episodes of genre anthology tv series such as Alfred Hitchcock Presents, The Twilight Zone, Thriller and The Outer Limits.