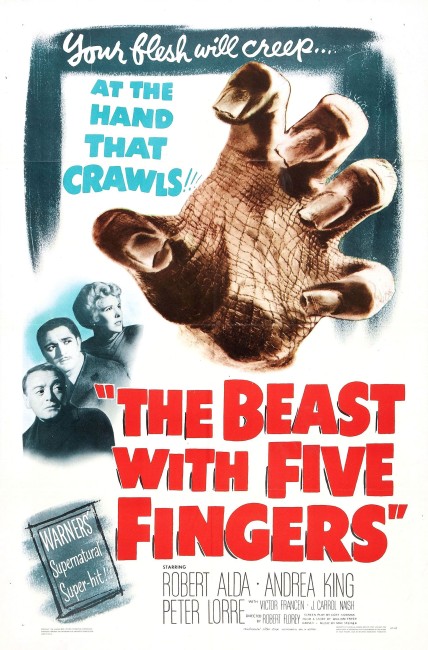 Composer Conrad Ryler, nurse Julie Holden and secretary Hilary Cummins attend the brilliant but irascible pianist Francis Ingram who is wheelchair-ridden in his villa in San Stefano, Italy. Ingram then falls down the stairs to his death, possibly having been pushed. In the subsequent acrimony that ensues over Ingram’s will, Hilary believes that Ingram’s severed hand has crawled out of his coffin and has returned to take revenge, strangling those responsible for his death.

The Beast with Five Fingers was directed by Robert Florey, a director of numerous B noir thrillers who had made genre films such as Murders in the Rue Morgue (1932) and The Face Behind the Mask (1941), as well as episodes of anthology series such as Thriller (1960-2) and the original The Outer Limits (1963-5). Ironically, Robert Florey is probably most famous within the genre for the one film he did not direct – the Boris Karloff Frankenstein (1931) – which he was originally slated to make before being replaced by James Whale. Certainly on the basis of The Beast with Five Fingers, one can determine that Robert Florey could have made an interesting Frankenstein, if one that would have been entirely from different from the film we did end up with.

The Beast with Five Fingers has a script by the legendary hackmeister Curt Sidomak, author of The Wolf Man (1941), various Universal monster sequels including Son of Dracula (1943) and Frankenstein Meets the Wolf Man (1943), several Invisible Man sequels and notorious cheapies such as The Ape (1940) and Bride of the Gorilla (1951), as well as writing the thrice filmed novel Donovan’s Brain (1942). (See bottom of the page for Curt Siodmak’s other films).

Curt Siodmak structures the story as a whodunnit and Robert Florey plays it with a willful psychological ambiguity that leaves one unsure whether what is happening is real or in someone’s imagination. The Beast with Five Fingers could easily have been one of the famous psychological horror films produced by Val Lewton during the same period beginning with Cat People (1942), films where elements of the fantastic hung ambiguously between actuality and the believer’s imagination – indeed, Curt Sidomak also co-wrote the Lewton classic I Walked with a Zombie (1943).

The Beast with Five Fingers is probably far too melodramatic to have been a Lewton film. Nevertheless, Robert Florey generates a reasonable degree of suspense, with images of the hand scuttling about the house, hiding between the books in a library, playing the piano (although the piece of music the hand plays would in fact require two hands to get the keyboard range required) and strangling and attacking people.

Unfortunately, in opting for the Lewtonian approach, Curt Siodmak falls flat on his face. Here Lewton isn’t producing and there is no restraint on Siodmak’s schlockier preponderances. What wrecks the film’s suspension of disbelief is the twist ending, where it is revealed that everything that transpired occurred in Peter Lorre’s guilt-wracked conscience.

This in itself may not have been so bad – it is in fitting with the filmic vogue of the era that seemed opposed to the supernatural and frequently opted for mundane end revelations. See also The Cabinet of Dr Caligari (1919), The Cat and the Canary (1927), Seven Footprints to Satan (1929) and Mark of the Vampire (1935). What makes the ending contemptible is the coda where it holds the audience in disdain for believing in the idea of a walking hand, with police inspector J. Carrol Naish re-entering the house and turning to address the audience directly: “Can you imagine anyone believing in a hand that would walk around?”

The film topbills Robert Alda (father of Alan) as the hero, although it is Peter Lorre who dominates the film, giving a wonderfully craven and balmy performance in the grand style that only Lorre could. Robert Alda has a striking matinee idol handsomeness – he resembles like a young Tyrone Power. He gives an unusually arch performance, tossing off droll lines: “This way to the grieving relatives.” Although, instead of leaving the character as a waspish cynic on the sideline, the film pushes Alda’s character out of shape in having him agonisingly pained romantic sincerities. Though set in Italy, the film’s locations (as was typical of the era) never travel beyond a soundstage or rarely even out of doors.