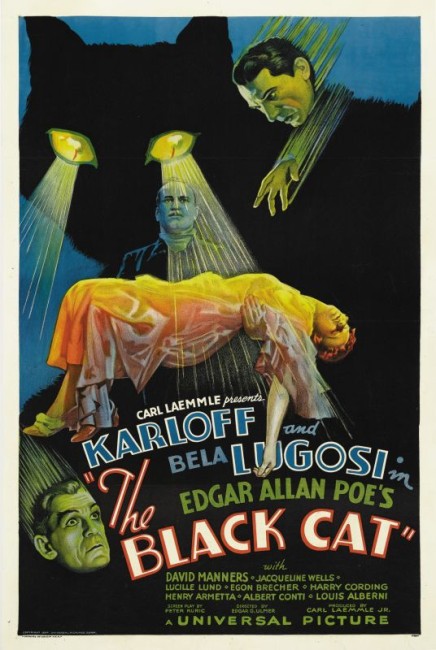 aka The House of Doom; The Vanishing Body

On a train journey through Hungary, American writer Peter Alison and his wife Joan share a carriage with psychologist Dr Vitus Werdegast. Werdegast offers them a ride at the station. However,his car breaks down and they are forced to seek refuge with Werdegast’s old friend Hjalmar Poelzig in the ultra-modern house Poelzig has built over the site of a WWI battlefield massacre. Once there they find that Werdegast has come seeking revenge against Poelzig who commanded the station that was situated on the battlefield and took away Werdegast’s daughter and wife. As Poelzig and Werdegast engage in a battle of minds, they discover that Poelzig not only has Werdegast’s late wife’s dead body preserved in the house but has also married Werdegast’s daughter. Poelzig and Werdegast now engage in a chessgame for the soul of Joan, whom Poelzig wants to sacrifice in a Satanic ceremony.

The Black Cat is regarded as a classic of the horror genre. It was one of a mini-spate of Edgar Allan Poe-based films that came out during the 1930s featuring Bela Lugosi and Boris Karloff – Lugosi had earlier appeared in Murders in the Rue Morgue (1932) and Lugosi and Karloff would later pair up again for The Raven (1935).

Although the odd thing that you notice about The Black Cat is that it has nothing whatsoever to do with the Edgar Allan Poe’s 1843 story, which was about a man murdering his wife and giving himself away by accidentally bricking her cat up along with her body. The credits do note that the film was merely “suggested by the Edgar Allan Poe story”, although the connection is slim to the point of non-existence. To be fair, Bela Lugosi’s character does at least manifest a pathological fear of cats and a black cat turns up about five times throughout. Essentially, director Edgar G. Ulmer and screenwriter Peter Ruric, a writer of pulp detective novels, threw Poe out and came up with a story based on a piece of gossip about a couple who were supposedly lured into the clutches of occultist Aleister Crowley,

The film’s director, Hungarian-born Edgar G. Ulmer (1904-72), had begun in silent German cinema, emigrated to the USA where he seemed a rising name until he was caught having an affair with the wife of a Universal Studios executive. Essentially blackballed from the industry, he worked steadily for the B studios throughout the 1930s, 40s and 50s. In the 1960s, Ulmer was suddenly rediscovered and championed as an auteur by French critics where The Black Cat and his film noir thriller Detour (1944) were held up as the two chief exhibits. Edgar G. Ulmer’s appeal one feels was overrated as the majority of his output was mostly hackwork like The Man from Planet X (1951), Babes in Bagdad (1952), Daughter of Dr Jekyll (1957), The Amazing Transparent Man (1960), Beyond the Time Barrier (1960) and The Lost Kingdom/Journey Beneath the Desert (1961). Certainly, The Black Cat is the best of Edgar G. Ulmer’s films, even if it is not a great one.

The film gains a substantial frisson from the pairing of Lugosi and Karloff (the first of eight such screen pairings). In a reversal of what would later become typecasting for either actor, Lugosi plays the hero and Karloff the villain, and the reversal of the expectation that either actors carries adds an undeniable element of tension. With Karloff skulking about in Mephistophelean haircut, dressing gown and looking his most gaunt and hollow, and Lugosi perpetually overdramatizing every syllable, the film seems charged every time the two appear on the screen.

Where The Black Cat does fall down is in that most of its depravities are all only suggested and take place off-screen. The most we ever see is Boris Karloff tied up and stripped to the waist getting ready to be flayed and the Satanists turning up in robes for the ceremony. It is a surprisingly talky film – in fact, it would be relatively easy to resurrect it as a stage play.

Furthermore, where one feels his reputation is overrated, Edgar G. Ulmer directs in a workmanlike manner. The look of the film is akin to a serial where directors would shoot everything in master shots because closeups involved more camera set-ups thus took longer to shoot. Ulmer rarely ever moves in to break scenes up – the chess game deciding the fate of Jacqueline Wells, for example, is notably lacking in suspense and takes place in a single wide angle shot. Another director might have drawn the tension out unbearably – the scene almost sits up and demands it. Ulmer uses some interestingly modernist sets influenced by the German bauhaus movement rather than the Gothic setting that was de rigeur for the day, but again fails to make any use of these in a visual way.

Edgar G. Ulmer had grown up as a protege of the influential Austrian director Max Reinhardt before emigrating to Hollywood. His promising career was cut short by a tactical blunder – that of wooing (and later marrying) script supervisor Shirley Alexander who was the wife of the nephew of Universal head Carl Laemmle. This had him blacklisted and he spent the next decade plus working for independent studios.

Edgar G. Ulmer’s other films of genre interest are:– Bluebeard (1944); Strange Illusion (1945) about a man’s precognitive dream; the alien invader film The Man from Planet X (1951); Daughter of Dr Jekyll (1957); the invisible man film The Amazing Transparent Man (1960); Beyond the Time Barrier (1960), a variant on the astronaut ending up in a mutant-ruled future; and The Lost Kingdom/Journey Beneath the Desert (1961), a cheap remake of the oft-filmed L’Atlantide.