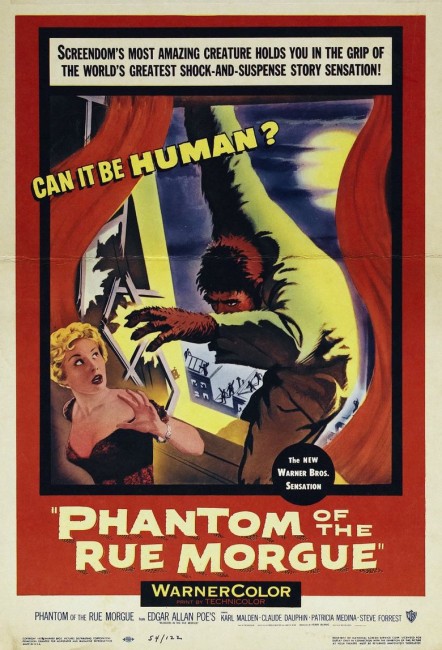 Paris around the turn of the 20th Century. Inspector Bonnard of the gendarmerie is baffled by a series of murders wherein women are found in locked apartments, having been killed by someone of ferocious strength. Witnesses all describe someone speaking in a different language. After evidence is found linking him, psychology professor Paul Dupin is blamed for the killings and arrested. The actual person behind the murders is the zookeeper Dr Marais who has trained an ape to kill by locating the sounds of bracelets with bells on that he gives to his victims, all women who have rejected his advances. With Dupin imprisoned, Marais now sets his eyes on his fiancee Jeanette.

The original 3D fad began in 1952. One of the biggest successes amongst this was Warner Brothers’ House of Wax (1953) with Vincent Price, which remade the classic 1930s horror film Mystery of the Wax Museum (1933) in 3D. Warner Brothers tried to duplicate the same success with Phantom of the Rue Morgue, which likewise remade another 1930s horror film, Murders in the Rue Morgue (1932), in 3D but failed to have the same hit a second time.

The original Edgar Allan Poe story The Murders in the Rue Morgue (1841) concerns the murder of a woman in a locked room, which is discovered to have been caused by an escaped razor-wielding orang-utan that had been the pet of a sailor. There is no intent of murder upon the sailor’s part in the original story, although the sailor we have here is swarthy and of sullen disposition and is shown killing a former acquaintance in one scene. Several other elements from the Poe story have been incorporated into the film – the witnesses who all think they hear the murderer talking in a different language, the victim’s body found stuffed up a fireplace in a locked room. We also get an appearance from Auguste Dupin, Poe’s investigator who is credited with being the first private detective in fiction – while this Dupin does do some investigating, the character is now substantially rewritten as a psychologist who ends up being falsely arrested as the killer through an improbably contrived series of events.

Needless to say, the film elaborates considerably on the story, adding more murders and Karl Malden as a mad Pavlovian zookeeper behind it all. This version is certainly closer to the story than the 1932 film. It does pay homage to the 1932 film, including recreating the stylised rooftop sets that the ape escapes across, one of the distinctive elements of that film, and somewhat follows the 1932 film’s plot of a mad zookeeper who sets his eyes on the hero’s fiancé. On the other hand, this version is sadly bereft of the gleeful stew of mad scientists and demented hypnotists that pop up there and in other versions of the story. Karl Malden’s customary pug-nosed overacting is laughably out of place in the role of the mad zookeeper.

Phantom of the Rue Morgue proves to be rather dull. Director Roy Del Ruth shoves numerous pop-up 3D effects out into the audience’s face with crude abandon – women screaming into the camera, a knife thrower throwing knives, a snarling ape, a dead body, a trampolinist and even one of the Flying Zacchinis trapeze artists. Charles Gemora, the makeup artist who became famous for playing apes during this era (and indeed also played the ape in the 1932 film) lurks about in a gorilla suit. Characteristic of almost any B movie featuring an ape, the climax involves the gorilla abducting the heroine, before it is shot down.

Director Roy Del Ruth was a prolific director of crime dramas and musicals since the silent era. His other genre films include the light fantasy ghost comedy Topper Returns (1941) and the mad scientist cheapie The Alligator People (1959). The film also holds a subsequent fascination due to its featuring later-to-be talkshow host and gameshow producing legend Merv Griffin as a medical student who is briefly suspected of the killings.