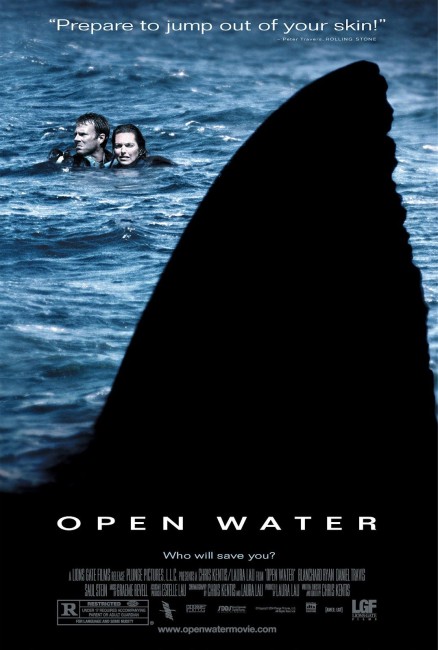 Daniel Kintner and Susan Watkins make an effort to get away from their busy working lives for a holiday in the tropics. They join a scuba diving school to take a dive at sea. Once underwater however, Daniel and Susan stray away from the main group. The instructor thinks he has miscalculated the number of people on board and, believing that everybody has returned to the boat, returns home. When Daniel and Susan surface, even though they return at the scheduled time, they find themselves abandoned in open water. As they try to work out what is happening and the hours begin to stretch out, they find themselves surrounded by sharks and try to stay alive while floating in the water with no protection or safety.

Open Water was one of the sleeper hits of 2004, thanks to great word of mouth after its appearance at the 2004 Sundance Film Festival. Open Water was the second film of Chris Kentis and his producing partner Laura Lau, who previously made the well-regarded but little-seen relationship drama Grind (1997). The favourable audience word of mouth earned Open Water a big US release. The film was called 2004’s The Blair Witch Project (1999), although this is a loose analogy in that, beyond both films loosely setting out with the intention of making audiences jump and being shot on minimalist budgets, the two have little in common.

A better comparison for Open Water might be Jaws (1975). Perhaps try to imagine Open Water as being the last half of Jaws that was set out on the open sea – minus the boat. An even better analogy might be between another part of Jaws – Robert Shaw’s account of the true life story of the USS Indianapolis, which was torpedoed in 1945 leaving 1917 survivors clinging to wreckage as they were picked off by sharks. In recent years, The Indianapolis story has been announced several times as a film project with names like Steven Spielberg, Mel Gibson, J.J. Abrams and Barry Levinson attached, although has never gotten off the ground, and Open Water may be the nearest we get to it for the time being.

Open Water makes much mention in its publicity of being based on a true story. This is undeniably true – the parents of Daniel Travis’s character are even thanked for help in the end credits. The film is based on an incident in 1998 where a married couple Tom and Eileen Lonergan were abandoned by their diving school and subsequently vanished off the Great Barrier Reef in Australia. However, Open Water‘s claim to be telling a true story should be regarded with a certain pinch of salt. [SPOILER ALERT]. In that both of the characters are killed at the end of the film and the bodies have never been found, any story about what did happen after they were abandoned must be purely speculative. In that more than three-quarters of the film takes place after the couple have been abandoned alone, it might perhaps be better to regard the film as fictional rather than offering an account of a true story.

Open Water has been shot very low-budget. Everything was filmed on location in Hawaii on digital video by director Chris Kentis and his wife Laura Lau. More than 90% of the film takes place in the water with only two characters, no sets and no props other than their scuba equipment, which must count as some record for the most minimalist film ever made.

That said, Open Water is utterly gripping. Chris Kentis manages to make the stretch of grey-blue water surrounding the couple from horizon-to-horizon into something that holds trepidation in every direction. Like Jaws, Open Water creates an intense sense of foreboding about what lurks and may emerge at every moment. Although Open Water does Jaws one better in that it creates a sense of intense foreboding without even showing us any shark attacks beforehand. Instead, there is the lurking menace of fins, ominous splashes and shark bodies seen gliding by underneath the actors. When the sharks do appear, the entire audience jumps.

In that there are no credits listed for animatronics or special effects, it seems that the sharks present are the real thing – and given that the entire film was shot on location it makes one wonder exactly what it is that Chris Kentis made his cast go through for the film and how much of the fear they are showing is real or acting. Although some of the earlier land-based scenes seem banal, Chris Kentis and his two actors Blanchard Ryan and Daniel Travis do an excellent job of portraying perfectly credible and human reactions to the situation once in the water.

Open Water 2: Adrift (2006) was a supposed sequel, although featured none of the cast or production personnel here, merely a different version of the same dramatic situation.