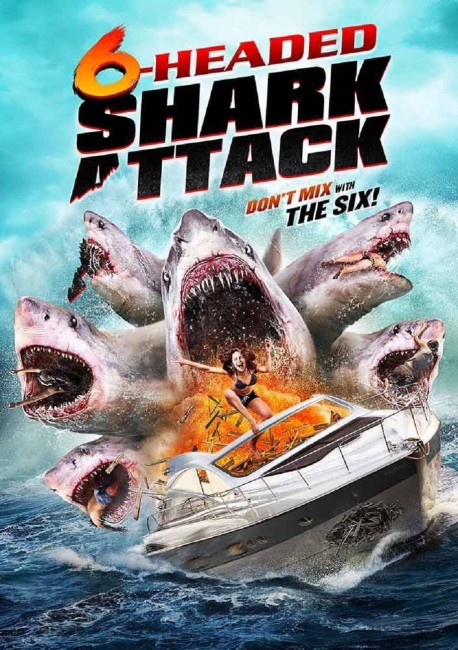 On Isla Corazon off the coast of Mexico, William runs a life-coaching course that teaches couples to reconnect through various physical challenges. As William puts the current batch of people through the course, his wife and business partner Suzanne announces that she wants a divorce. At the same time, the group on the island are attacked by a six-headed shark. As they realise, it is the product of classified US government experiments that were being conducted in a floating laboratory just off shore, which have created a shark with the ability to regenerate its heads.

Mark Atkins, a regular Asylum director (see below), does a serviceable job. At least, he gets the idea of the Asylum-patented gonzo shark film down better than newcomer Nico De Leon did in the previous film. There are the entertainingly absurd set-pieces expected of the film. The film’s one moment of delirious Sharknado-like silliness is where the six-headed shark emerges up onto the beach, walking on two of its heads. To expectation, the effects fall between the semi-competent and amateurishly slipshod – notably the shark maelstrom. There are certainly times the film looks cheap – the government research laboratory, for instance, is no more than a tarpaulin covered platform anchored at sea.

In all other regards, 6-Headed Shark Attack plays out as a regular B killer shark film. The Asylum have gone on location in South Africa and cast a bunch of local actors who are pretending to be standard Americans. It may say something about how impoverished the South African film industry is these days – or maybe just that The Asylum couldn’t afford any better – but it has to be said that some of the actors are not very good. In particular, lead actor Brandon Auret feels like he has stumbled into work after a week-long drinking binge – and without even taking the time to shave and shower first.