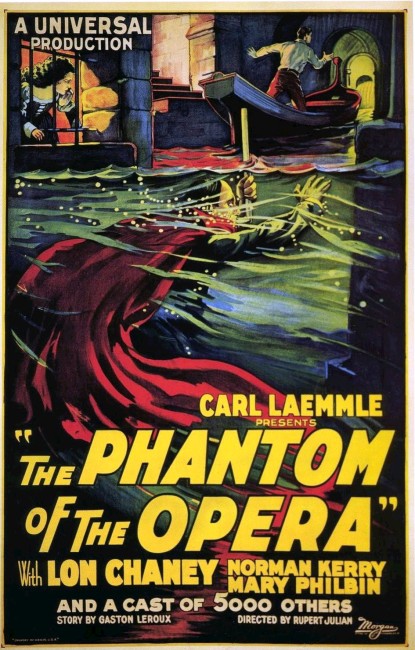 The Paris Opera House is haunted by a mysterious Phantom who sends threatening notes demanding that the diva Carlotta be replaced by her understudy Christine Daae. The Phantom, in truth a criminally insane genius and self-educated composer, abducts Christine and takes her with him down into his lair in the labyrinths beneath the opera house. There he reveals the hideous visage he keeps hidden behind a mask and professes love for her. The police and Christine’s fiance come searching but must traverse the deadly traps the Phantom has built in the catacombs in order to get to his sanctum.

The Phantom of the Opera is one of the outstanding classics of the silent era. It was the most celebrated performance of the great Lon Chaney [Sr] who made a virtue out of roles where he would undergo extraordinary physical changes for the part. The character was the first of Universal’s Famous Monsters and the story was in turn remade several times – although never bettered – before finding a new popularity on stage in 1986 with the phenomenal success of the banally romanticized Andrew Lloyd Webber musical incarnation. Today, The Phantom of the Opera is a fascinating artefact – it has dated somewhat and proves surprisingly slow-moving in places. Nevertheless, it still has an epically fantastique majesty to it that stands leagues above the other productions of the story.

What is particularly noticeable is the way that director Rupert Julian keeps the character of the Phantom deliberately mysterious – as opposed to other versions, which create too much sympathy and not enough mystery for the Phantom. For a good third of the film, The Phantom is not seen, only talked about and built up by half-seen shadows and fearful gossip among the dancers. Then when The Phantom is eventually seen, it is at first through an unnervingly frozen lifelike mask. The Phantom’s face, once disclosed, is not something that is in itself scary (at least today – there were reports of women fainting when it was revealed in the 1920s), nevertheless Rupert Julian does his best to make it so – particularly the ingenious shot that shows the unveiling from the front as Mary Philbin’s hand sneaks up to unmask him from the back, with Lon Chaney’s face going wide open is a startled silent shriek seen by the audience before he turns to face her.

The film has a genuinely epic quality – particularly set-pieces like the cutting of the chandelier, which is seen falling down onto hundreds of screaming patrons. The masque with the Phantom appearing as a resplendent Red Death, a sequence that was shot afterwards and tinted red, is fabulous. The latter third of the film with its journey down into the cellars is almost a perfect screen evocation of the dark romance of a 19th Century Gothic novel, with images like the unconscious Mary Philbin being drawn along on the back of a white horse and the cellars revealed as an amazing procession of arched levels and underground lakes through which the Phantom rows on a gondola, while her long lace train trails across the floor and in the water.

The climactic scenes are the most wonderful evocation of the spirit of Louis Feuillade and the 19th Century potboiler ever put on screen. In fact, the 1925 The Phantom of the Opera is the only adaptation to take up this part of Gaston Leroux’s original narrative (and in so doing becomes the most accurate adaptation). There are fabulous scenes with the two heroes caught in mirrored heat traps and flooding cells, while the heroine has to make a choice whether to twist an ornamented spider or a scorpion to signify whether she wants to marry the Phantom and save her lover or not. Or the amazing scene where the Phantom takes a tube to breathe through and then enters the waters of the underground lake, disappearing until only the tip of the tube shows above the water, and heads off to drown de Chagny’s brother.

The film also exists in differing version. Most of the ones seen today are from a print that was re-edited in 1929 to add sound. This version added a music score and had new scenes with opera singer Mary Fabian playing the part of Carlotta, as well as the colour scenes where The Phantom attends the masque as The Red Death, which were directed by Edward Sedgwick. Lon Chaney was not available for voice-over work and the role of The Phantom remains unspeaking.