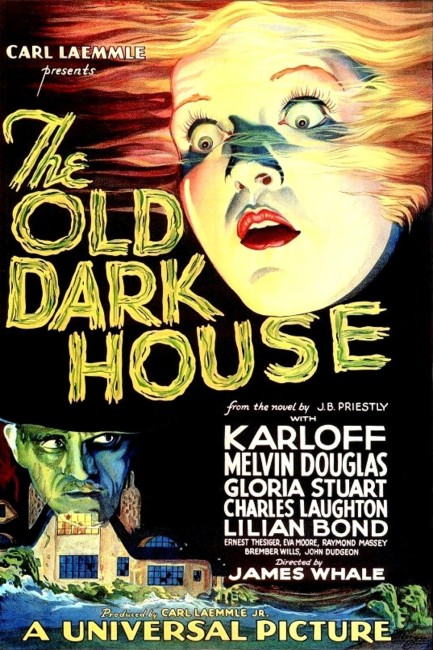 Husband and wife Philip and Margaret Waverton are driving to Shrewsbury along with their friend Penderel. They become lost somewhere in rural Wales in the midst of a rainstorm. A mudslide then washes out the road ahead. They seek refuge at a nearby house where they are welcomed by the eccentric Horace Femm, who lives with his deaf and suspicious sister Rebecca and the mute, sinisterly hulking butler Morgan. They settle in for the night and are joined not long after by two other travellers, the wealthy industrialist Sir William Porterhouse and his girlfriend, dancehall girl Gladys Duquesne, whom Penderel takes an instant liking to. However, as the storm causes the power to go off and the brutish Morgan becomes menacingly drunk, they realise that the house holds secrets, including one family member, the mad pyrokinetic son Saul, who is kept locked in the attic. The drunken Morgan now lets Saul loose.

In the late 1920 and throughout the 1930s, there flourished a sub-genre of horror films that one has dubbed the Old Dark House thriller. These were nominally similar to haunted house films, excepting that Old Dark House genre rigidly eschewed any hint of the supernatural. Instead, the dark gloomy old mansions would be filled with masked killers (who usually adopted the name of some animal), mad relatives locked away in the attic or supernatural elements that at the end were revealed to be an absurdly contrived plot upon the part of relatives to drive someone crazy and obtain their inheritance. These included the likes of The Bat (1926), The Cat and the Canary (1927), The Gorilla (1927), The Last Warning (1929) and sound remakes of these such as The Bat Whispers (1930), The Cat Creeps (1930), The Gorilla (1931), The Cat and the Canary (1939) and The Gorilla (1939). Most of these had originated earlier as stage plays.

The Old Dark House was intended as one of these. Universal had purchased Benighted (1927), a novel by the renowned British writer and broadcaster J.B. Priestley, who is generally best known for the play An Inspector Calls (1947) – see the film version An Inspector Calls (1954). The project was handed to the perpetually eccentric British director James Whale, who had just come from the groundbreaking success of Frankenstein (1931).

Whale assembled a remarkable cast that included Boris Karloff, the mainstay from Frankenstein; Ernest Thesiger, later Dr Pretorius in Whale’s The Bride of Frankenstein (1935); as well as Raymond Massey, Melvyn Douglas and Charles Laughton, who would become known as some of the finest character actors of the decade; and as the blonde heroine cast Gloria Stuart, these days best remembered for her Oscar-winning turn as the 100 year-old Kate Winslet in Titanic (1997).

Many of the films in the Old Dark House genre had wonderfully stylised lighting scheme and directorial flourishes – fine examples being the 1927 The Cat and the Canary and The Bat Whispers – but ultimately they were films of occasional affect. On the other hand, in The Old Dark House James Whale creates a Gothic mood that permeates the entire film. The film is set contemporary and the tone is certainly a good deal more realist than the distorted European netherworld that Frankenstein took place in, nevertheless James Whale causes the film to slip into a stylised Gothic mood despite. (Like Frankenstein, James Whale’s touch is so Gothic that one has to actively remind themselves that the film is set contemporary). Whale borrows the lighting effects from The Cabinet of Dr Caligari (1919) and German Expressionist cinema, filling the film with starkly bared sets and ominous lighting schemes.

There are some classic moments. Boris Karloff gets a wonderfully sinister introduction – the door of the house opening on a single eye peering through a wedge of light, before we are introduced to his sinisterly lit bearded face and then get to see his full figure standing, in a characteristically eccentric Whale-esque touch, muttering in an incomprehensible babble. Whale directs a striking scene where Gloria Stuart undresses while talking to Eva Moore, which becomes increasingly sinister as we gets cutaways to Boris Karloff’s peering eye again, while the camera focused on Eva Moore’s face becomes distorted and underlit and Gloria Stuart sees her own face in the mirror becoming fractured and contorted out of shape.

There is one nifty jolt shot where Gloria Stuart stands in front of the dinnertable making animal figures in silhouette on the wall and then another figure suddenly appears seemingly from within her shadow. Whale creates great suspense out of the scenes with Boris Karloff pursuing Gloria Stuart and Raymond Massey trying to fight him off. It all culminates in a wonderful climax where Raymond Massey must face down the diminutive and dementedly nutty Bember Wills over the dinnertable and wrestles with him on the stair landing as he sets the house alight.

A characteristic facet of James Whale’s directorial work was his droll and often eccentric sense of humour. This was not allowed much room to come to the fore in Frankenstein but started to appear here and reached its full blossoming in The Invisible Man (1933) and Bride of Frankenstein. Most of these Old Dark House films trod a comfortable line between comedy and thrills but James Whale makes The Old Dark House distinctly and uniquely his own. The dinnertable scene with Ernest Thesiger insisting “Have a potato” is a classic, while his refusal to go up the stairs to get the lamp is hysterical.

Whale and his cast create some wonderfully crafted characterisations. Ernest Thesiger has a weirdly birdy presence and Eva Moore plays the gimlet-eyed old shrew issuing doom-laden warnings with great effect. Boris Karloff adds sinister presence by stumbling about in bearded, scarred face and saying nothing at all. The visitors are an uninteresting bunch in comparison, excepting for Charles Laughton who offers a marvellously crass and boisterous presence that succeeds in stealing the film. The actor playing the aging family head – listed as John Dudgeon – was actually a woman Elspeth Dudgeon.

As an Old Dark House thriller goes, The Old Dark House is surprisingly light on plot – not much happens and there is little of the contorted twists and revelations that occur in other films of the genre. Some of the menaces present – Boris Karloff’s hulking butler – never do much. Both Ernest Thesiger and Eva particularly Moore’s characters drop off once the thrills start proper, while Charles Laughton is forgotten about the moment that Melvyn Douglas announces he is going to marry his girlfriend Lillian Bond. The characters are afforded such little development that we never even find out why the Wavertons are travelling through the backwoods of Wales with Penderel as company. All the film’s effect comes in James Whale’s mood and the droll playing of the cast.

The film was poorly remade by William Castle in conjunction with Hammer Films as The Old Dark House (1963).

James Whale’s other genre films were:– Frankenstein (1931), The Invisible Man (1933) and Bride of Frankenstein (1935). Gods and Monsters (1998) is a biopic based on the circumstances surrounding Whale’s mysterious death.