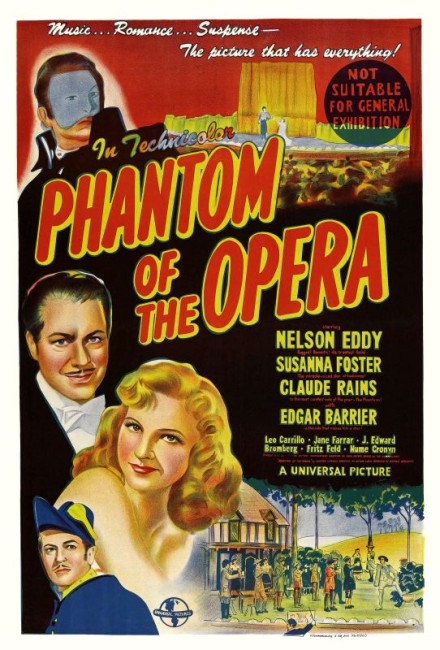 Mild-mannered Enrique Claudin is discharged from his position as a violinist with the Paris Opera’s orchestra. Struggling to make ends meet, he pins all his hopes on selling a concerto he has written. He then discovers that the concerto has been stolen by Pleyel, a music publisher he has submitted it to. In anger, Claudin strangles Plevel but during the fight has a tray of acid thrown in his face by Plevel’s assistant. With his face badly burned, Claudin flees and hides in the labyrinth of tunnels under the Opera House. Sometime later, there are rumours of a phantom haunting the opera house. With his disfigured face hidden behind a mask, Claudin appears and demands that the beautiful understudy Christine DuBois, who he had been secretly sponsoring for tuition before the accident, be made the opera’s diva. When his wishes are not complied with, he arranges a series of fatal accidents.

This was the second screen version of Gaston Leroux’s novel The Phantom of the Opera (1909), following the still definitive silent version The Phantom of the Opera (1925) starring Lon Chaney [Sr]. The 1925 film is an absolute classic due to Chaney’s memorably mad and contorted performance and a superbly Gothic climax venturing down into the cellars of the Paris Opera House.

In the mid-1940s, Universal were enjoying a good deal of success with their Frankenstein and Dracula sequels and so, rather than create any kind of sequel to the Chaney film, which was really the first of their classic monster movies, they decided to remake it with the addition of colour and sound. (See bottom of the page for the other versions of The Phantom of the Opera).

Unfortunately, in remaking The Phantom of the Opera in sound and colour, all that Universal ended up doing was embalming it. A huge budget was thrown at the film and Phantom of the Opera 1943 is a production that cannot help but impress with its sumptuously colourful sets and costumery. It was shot in Technicolor at a time when the bulk of films made in the US studios were still in black-in-white so the lushness would have been even more amazing if you consider the film through the eyes of the audience of its time.

The opera house is a marvellously gilted coliseum of multi-storey boxes (which was actually rebuilt using the set from the 1925 film) filled with audiences in the hundreds. The underground system of tunnels is a fabulous series of (studio-bound) lakes and crumbling stone caverns. The cutting of the gold chandelier decorated with dozens of candles is the film’s most exquisite set-piece. Even if nobody else is going to let the production be an interesting, the set-designers are – when Nelson Eddy catches his fall on a curtain, it is not merely a curtain but a hundred foot velvet drape, while Claude Rains’ Enrique doesn’t get to live in a mere poverty-laden flat but instead gets one with an angular roof and giant-sized intruding ceiling beams like something out of German Expressionism.

Despite such, Arthur Lubin’s plodding direction is determined to wring any interest out of the proceedings. Everything in the film happens at a sedate pace as though it were a standard soap opera romance of the era. Even though Claude Rains plays the title character and central figure in the film, for instance, he is only third billed on the credits with the lead positions going to romantic hero Nelson Eddy followed by Susanna Foster who plays this version’s Christine..

This is a film where all emphasis has been placed on the spectacle – the colour, the costuming, the sets, the music and staging – such that the horror elements ends up being forgotten. In comparison to the 1925 film with its magnificent evocation of the Gothic, all that we get here is a few shots of the Phantom’s lurking shadow, while the climactic abduction and venture down into the cellars to rescue Christine is something that is over within minutes.

It is here more than anywhere else that you can trace the descent of The Phantom of the Opera from a Gothic horror story to the weepy Andrew Lloyd Webber musical, which bled out all horror elements and romanticised the story. It is no wonder then that this version of the story has gained a respectability more so than any other version up until Lloyd Webber – it is the perfect stuffily respectable desiccation of the story.

It is hard to take pint-sized Claude Rains’ Phantom seriously, he seems more like an indignant fox terrier than the forbiddingly mad figure that Lon Chaney memorably incarnated. Not to mention that with the casting of Claude Rains, we now have a Phantom who is only 5’6″ in height, meaning that even when he is threatening this film’s equivalent of the character of Carlotta (Jane Farrar), she looks taller than he does.

As modern horror fans come to understand, the addition of backstory is almost always something that weakens an iconic horror character – characters seem to work far better when they are simply evil without any need to have to make them sympathetic. It becomes extremely difficult looking at weak-jawed and backboneless Claude Rains throughout the first thirty minutes and thinking “This wimp is supposed to turn into the marvellously mad figure enacted by Lon Chaney?” Even the burning of the Phantom’s face is a laughably directed scene – the girl picks up a flatbed tray of acid as though it is the most obvious thing to throw and then proceeds to stand half-a-minute as Rains just waits there before deciding to throw it at him.

The film also suffers from the addition of comedy relief with the mugging idiocy of stage-manager Steven Geray and in particular the romantic triangle between Susanna Foster and lookalike heroes Nelson Eddy and Edgar Barrier. Eddy and Barrier are played as though they are doubles, each with ridiculous little fake pencil mustaches. Their scenes are played for bumbling humour where they are constantly mirroring one another’s actions, offering Susanna Foster the same thing or trying to walk through the door at the same time and reacting with mutual stances of popping discomposure.

The sets for the film were later reused in The Climax (1944), which also featured Susanna Foster as a singer being controlled by sinister doctor Boris Karloff.

Arthur Lubin other genre films include:- the Boris Karloff-Bela Lugosi mad scientist/brain transplant film Black Friday (1940); the Abbott and Costello Old Dark House comedy Hold That Ghost (1941); the Arabian Nights adventure Ali Baba and the Forty Thieves (1944); the dull Greek myth drama Night in Paradise (1946); It Grows on Trees (1952), a comedy about trees that grow money; the entire Francis the Talking Mule series begun with Francis (1950) and including Francis Goes to the Races (1951), Francis Goes to West Point (1952), Francis Covers the Big Town (1953), Francis Joins the WACS (1954), Francis in the Navy (1955) and Francis in the Haunted House (1956); The Thief of Bagdad (1961) with Steve Reeves; and The Incredible Mr Limpet (1964) wherein Don Rickles turns into a porpoise. The film was also produced by George Waggner who was most famous as director of the Lon Chaney Jr The Wolf Man (1941) and a number of B movies of the era including Mystery Plane (1939), Horror Island (1941), Man Made Monster (1941) and the aforementioned The Climax.